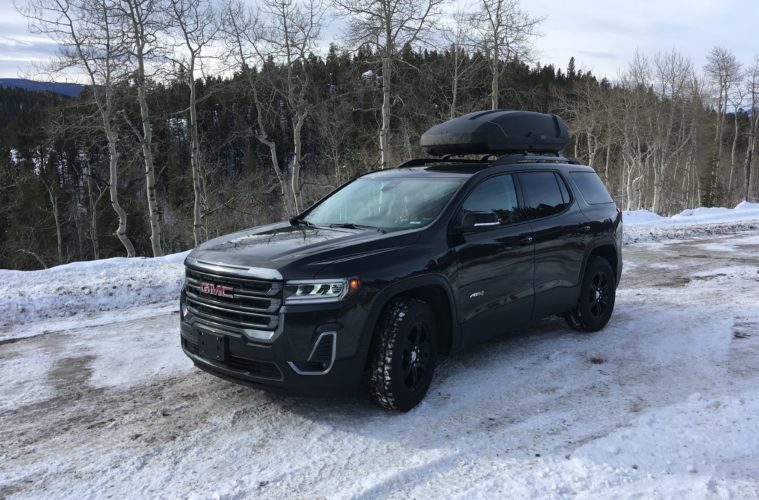 General Motors first offered the Acadia in 2006 as a 2007 model year and used it to clean up their inventory. In a far reaching way, it evolved from a number of GM vehicles spanning from SUV’s to minivans to take advantage of the swelling demand of mid-size SUV’s in the market. As of 2017 the Acadia is in its second generation and new for 2020 is the AT4 trim, drawn from the All Terrain Package previously available on the SLE and SLT trims.

Basically, the AT4 trim takes the street-focused Acadia and beefs it up to take on gnarlier dirt roads—unfortunately, that didn’t include any extra ground clearance or underside protection. It’s not trying to be any sort of rock-crawler, but it does mitigate some of the cringe factor to access deeper into the backcountry to kickoff your outdoor recreation activity. If nothing else, it looks tougher, which is a thing for some.

Our test trip took our family of four with a 6-year-old and 2-year-old from Boulder to Telluride, covering around 700 miles, on a ski trip. The test vehicle has a base price of $41,300 plus about $3,000 in options (interior upgrade, infotainment upgrade, and driver alert package). 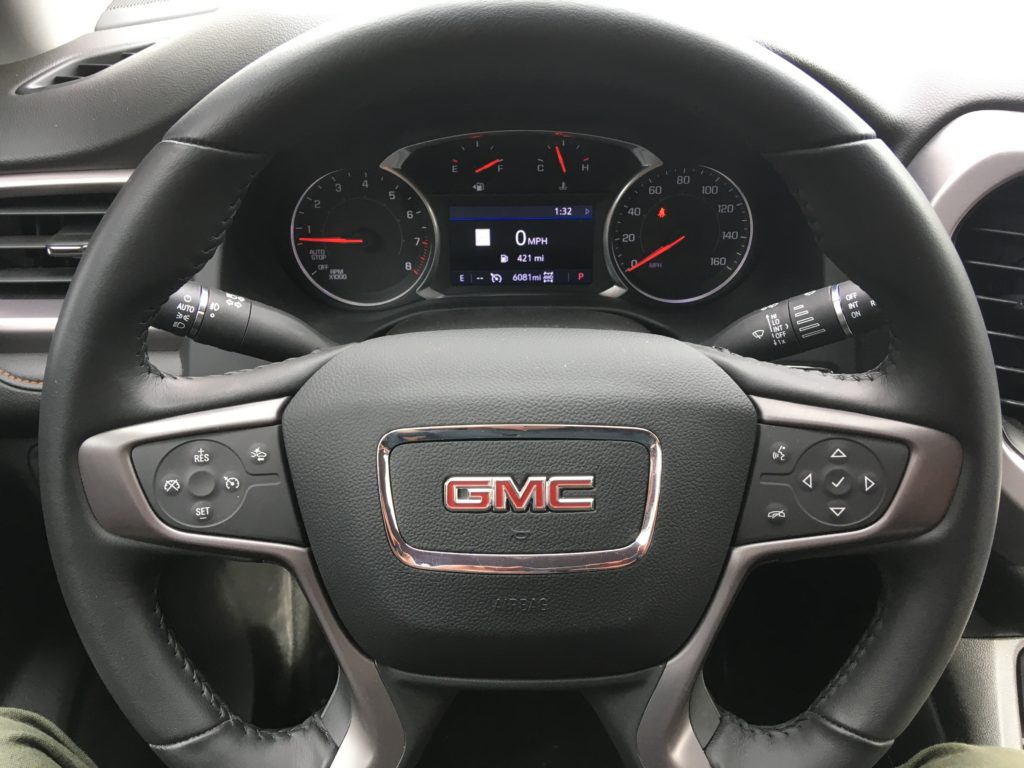 The Acadia was originally designed for being driven on the road and the AT4 trim doesn’t distract from how well it handles at speed. It’s a very comfortable ride and it is responsive to control input and feels secure on paved and dirt roads alike. It is smoother and less clunky than even some smaller SUV’s we’ve tested. The Electronic Precision Shift (EPS as GMC calls it—not to be confused with electronic power steering) panel took a little to get used to and while I thought it was a very clever way to free up space in the center console, I was skeptical of the manual shifting configuration. There are buttons for Park, Reverse, Neutral, and Drive. Then at the far end—on the passenger side—is an “L” button, for Low and the plus and minus buttons above and below that to manually select a gear. As it stands, it’s a bit of a stretch, and I found it tiring to hold my hand down there to manage the gears as I rolled down a snow covered road and wanted to stay off of my brakes. But, the fix was when I had a cup in the driver’s center console cup holder, I could just rest my forearm on that and easily add or subtract a gear or two as needed. 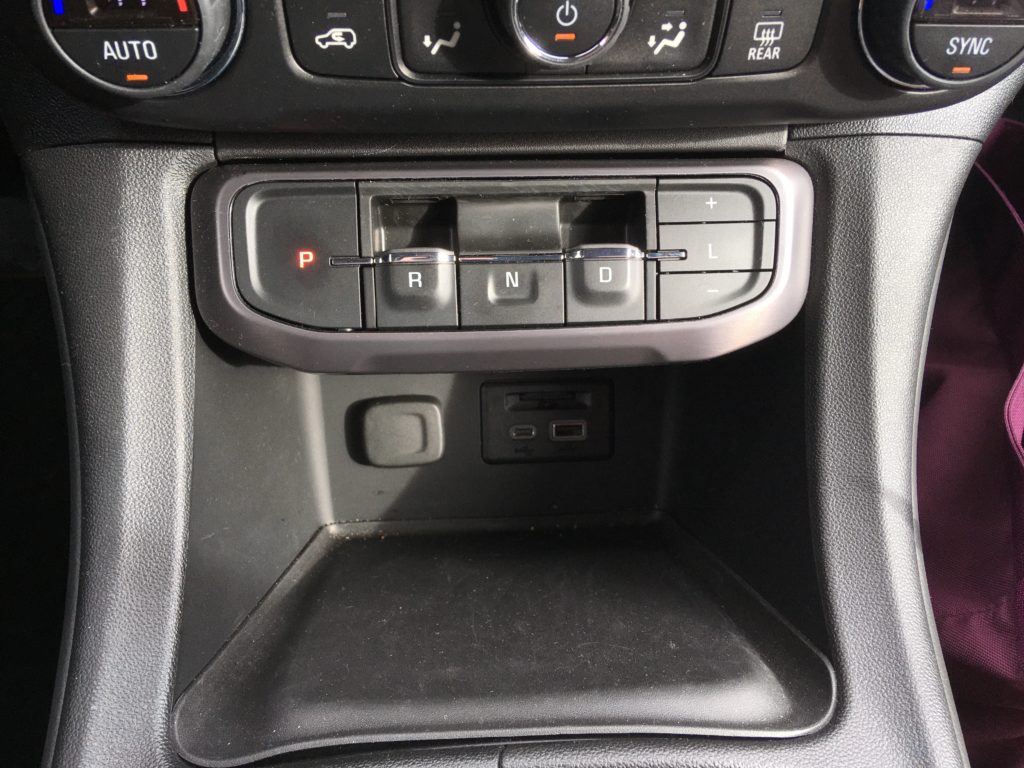 The 3.6-liter V6 offered plenty of punch when needed, even when fully loaded with us and all of our ski gear for a five-day trip to the San Juan’s. The new nine-speed transmission was always smooth and the all-wheel drive and all-terrain stock tires stuck nicely to the road and did reasonably well on snow pack. Though, nothing like the Bridgestone Blizzak’s I’m testing on another vehicle at the moment—totally different categories of tire. We played with the drive-mode selector some, but we didn’t notice much change in our fairly average use conditions. 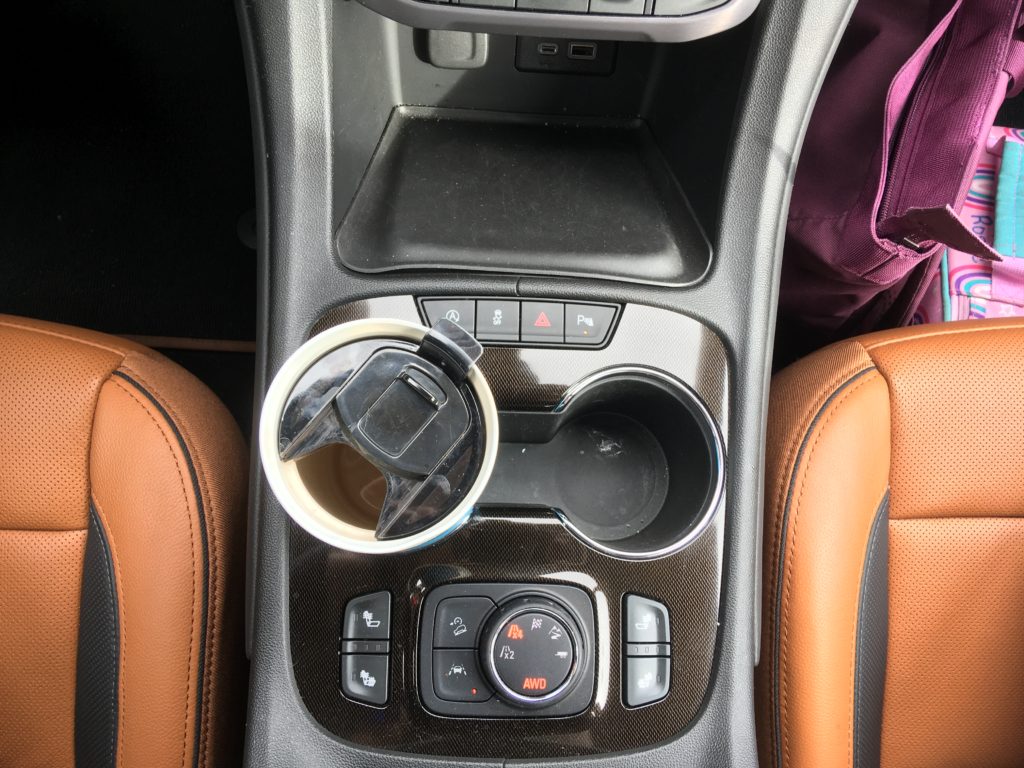 Unfortunate placement of the hazard button… hiding behind the cups.

The 310-hp engine is rated to tow up to 4,000 pounds, which is a notable amount compared to similar SUV’s and allows for around medium sized (20-25 foot) travel trailers. Our test Acadia only had two rows which provided a spacious 42 cubic feet of rear cargo space—the three row version has 13 cubic feet of dedicated cargo storage. But in both versions all the rows fold down flat to make for an even cargo platform to provide 79 cubic feet. There is also a second row captain chair option. 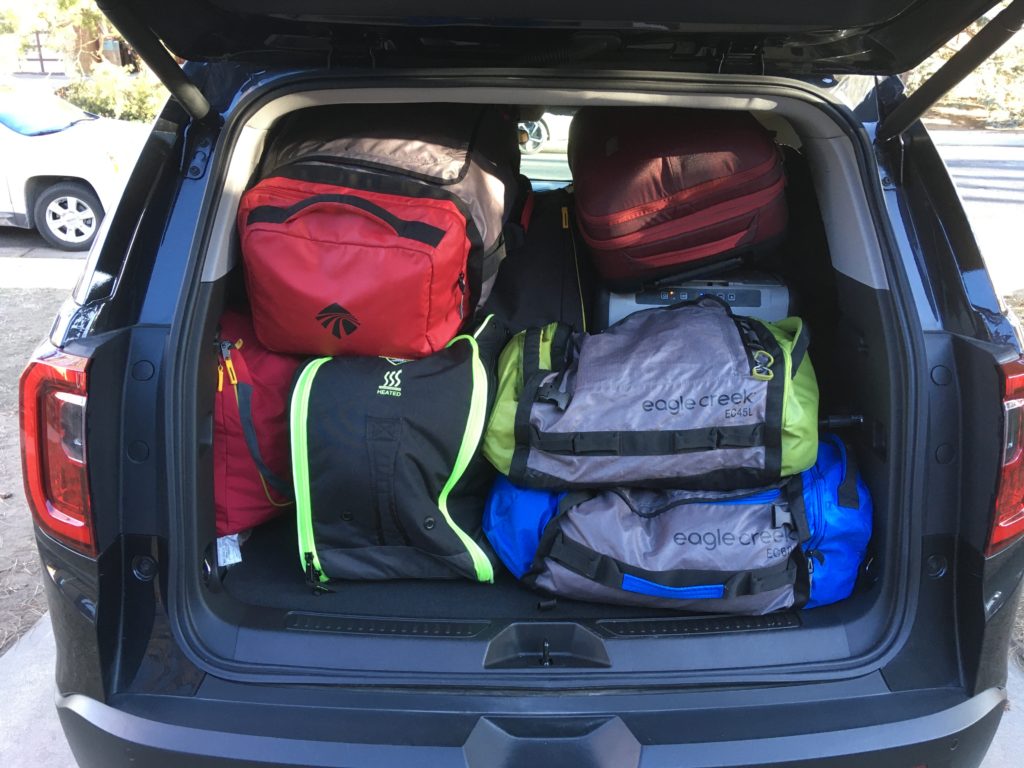 Our gear for the five days we were away on a ski trip filled the rear cargo area behind the second row with the exception of the skis which fit into the Thule Force XT cargo box on the roof. Since we were staying at the Mountain Lodge with a full kitchen, we hauled a Dometic CFX electric cooler with groceries from home. That was a little space intensive and like with most GMC vehicles, the 12v socket in the cargo area causes the cigar shaped plug to stick out into the cargo space and makes packing around it a little awkward. My preference is how the Toyota 4Runner or Infiniti QX50 has it configured. 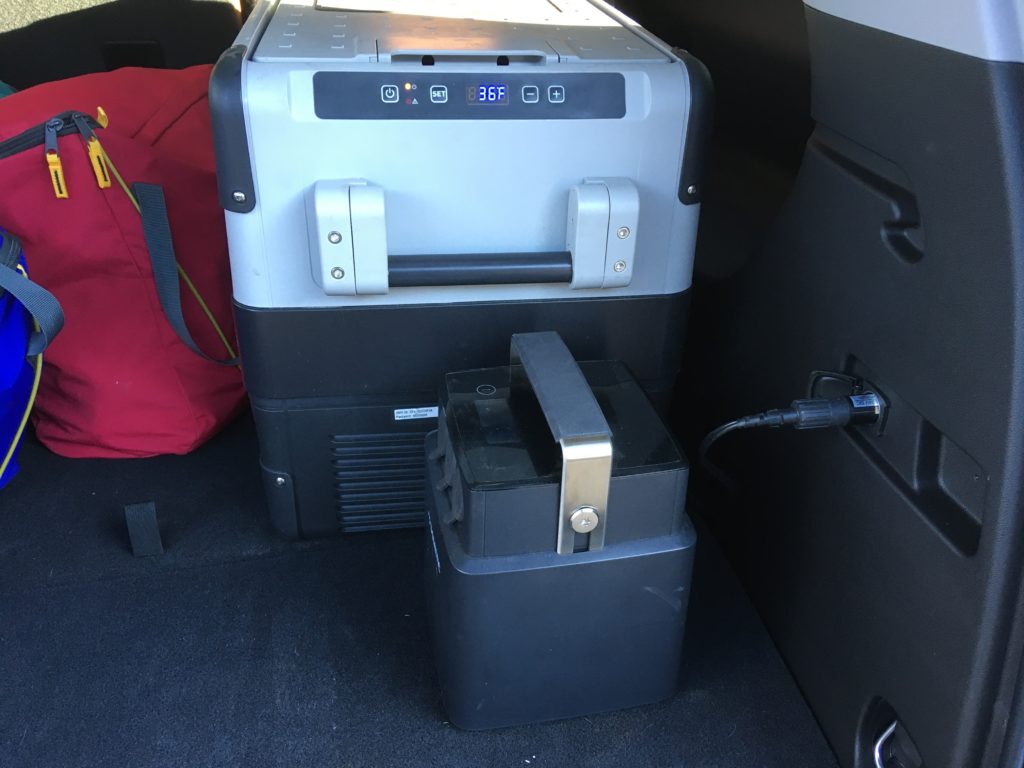 Our Acadia AT4 came with the factory crossbars installed which were fixed at about 30 inches apart on the beefy rails and couldn’t move forward or aft. But our Large (74.75-inch) Thule cargo box easily clamped on those crossbars and we didn’t have any problems the whole trip.

The 2020 GMC Acadia AT4 is rated by the EPA at 21 MPG on average with a 18/25 MPG city/highway split and by the end of our journey, we were right in that range—even with the cargo box and the internal space being pretty well loaded up. This is in part to the efficiency of the nine-speed transmission.

The AT4 trim includes an off-road-tuned all-wheel-drive system and hill descent control not found on the other trims to give it a slight advantage for rougher and steeper roads. Inside the vehicle, I was glad to see both a USB-A and a USB-C port in the center console area along with a 12v port and it’s also where the SD card port for the navigation system sits. The problem with the latter is we did find larger items kept in that space could bump into the SD card in the port causing it to eject and disable the navigation. The eight-inch touch screen and integrated infotainment controls were reasonably intuitive though there was still a little bit of a learning curve to find some of the more obscure controls like turning off the screen. Two of our favorite features from GMC are the built in WiFi (especially as travel writers constantly needing to work while on the road) and the remote start on the key FOB and via the GMC smartphone app through the OnStar service. 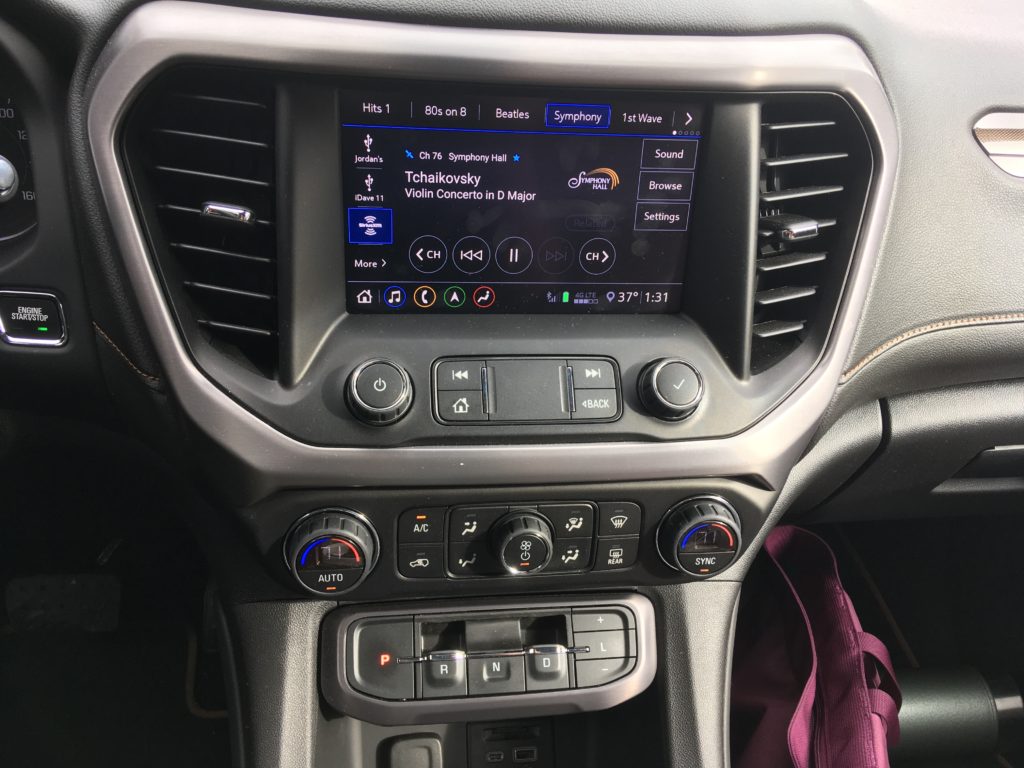 The Acadia AT4 was very comfortable for our 700 mile journey and we would be happy to do longer trips in it. Features like the eight-way power adjustable driver’s seat with lumbar support, heated front seats, three-zone climate control, and being well insulated to dampen road noise were appreciated on our wintery journey to Telluride. 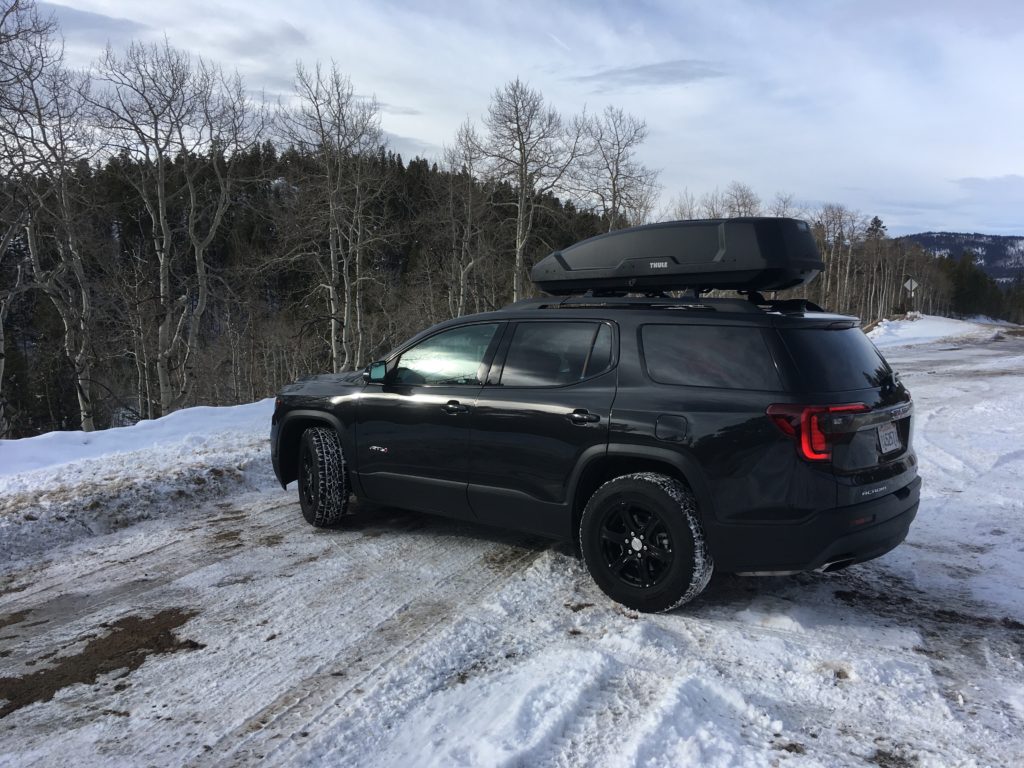 The key family friendly feature of the Acadia AT4 is the LATCH car seat anchor points for installing kid car seats—one on each outboard seat of the second row. Three-row versions of the Acaida also have anchor points behind the third row seats. With just over seven inches of ground clearance, the step into the vehicle is low enough for my 2-year-old to climb himself in (a very independent driven age). Missing from the family friendly features are the built in window shades (though it does have nicely tinted rear windows). 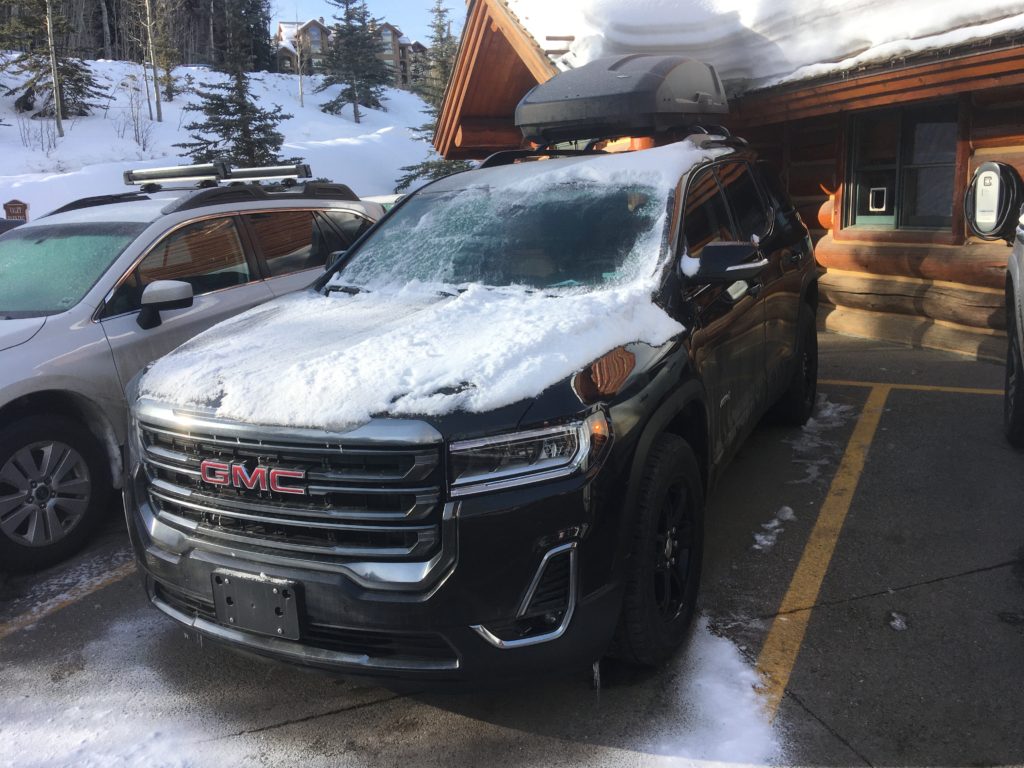