Leftover Salmon celebrates 20 years with New Year’s shows in Boulder and Denver and EO gets in on the party with a little retrospective and essential discography.

If any band defined the Colorado trend of taking traditional bluegrass and beating it over the head with rowdy long-hair revelry, it was Leftover Salmon. When Vince Herman walked on stage and yelled, “Festivaaaal!,” it didn’t matter if he was in Town Park or the Fox Theatre.

It was a call to action that turned the atmosphere into an instant party. The band’s self-dubbed brand of “Polyethnic Cajun Slamgrass” was a wild amalgam of hot picking, Zydeco dance groove, the occasional dusty ballad and a proper dose of acoustic-rock fury. At their best, Salmon would combine just the right amount of stellar string band chops with gonzo stage antics.

While Herman was thrashing around like a bearded madman, Drew Emmitt would be bobbling his shaggy head, shredding scales on his mandolin—unable to decide if he wanted to be Bill Monroe or Jimi Hendrix. Off to the side, sporting a high-country mullet, gentle giant Mark “Banjovi” Vann would work the five-string banjo with a unique electric tone that’s never been duplicated. Their shows were aerobic—many times topping four or five hours—as the band hosted all-night fist-pumping hippie rodeos. But the group also had a serious side discerning musicians and fans couldn’t deny. In addition to hopping around with the “4:20 Polka” or chanting ceremoniously with Herman on “Rise Up, Wake and Bake,” crowds were hearing original tunes ripe for tenure in the Americana songbook like “Valley of the Full Moon” and “Get Me Outta This City.”

After emerging in the mid-90s as the Front Range’s biggest buzz band, Salmon brought their hot-boxed hoedowns across the country and eventually spawned a new-school jamgrass scene that included admirers in the String Cheese Incident and Yonder Mountain String Band.
The group was never quite the same after the death of Vann in 2002, and since calling it quits in 2004, Salmon gets together for only a handful of shows every year. This December, though, the group will celebrate 20 years together with two shows at the Boulder Theatre on December 30 and 31 and a special Leftover Salmon and Friends show at the Ogden Theatre in Denver on January 2. 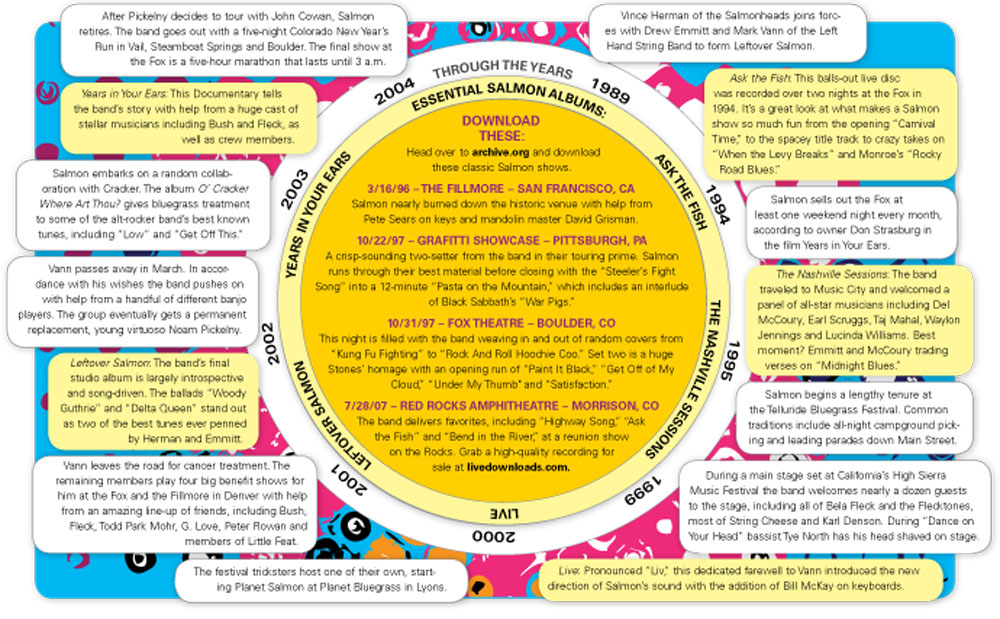