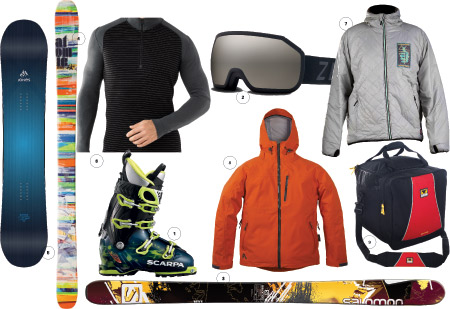 Want to know what’s going to be the hottest gear on the hill when the lifts open? Go ahead and drool over our Editor’s Choice awards for the best of resort gear in our Resort Ski Gear Guide:

Meet the one boot to rule them all. Aspen-based freeskier and all-around badass Chris Davenport put his knowhow into the design of our favorite footwear, which skis much like he does. The light (3 pound, 13 ounce per boot) Freedom SL can bang in the resort or saunter up into the backcountry since Carbon Core Technology gives a 120 flex index. Interchangeable soles—that are actually bolted through the frame—make it easy to switch them from alpine, to AT, to Dynafit.
$769; scarpa.com

Light conditions keep changing on the mountain and so do the polarized, photo-chromatic lenses on these fine-looking goggles. Armed with those two technologies, you can deal with everything from changes in the weather to transitions from tree shadows to groomers.
$150; zealoptics.com

This baby does everything you need it to do at a Colorado resort just right. With a 105 mm waist it’s reassuringly stable underfoot—that’s the perfect width to transition between powder shots in the trees and back on to screaming groomers and bumps. Salomon’s utility rocker gives it float in the soft stuff and sashay on piste.
$699; salomon.com

Simply put, the Elysian is a big mountain board made for a lady. At 95 mm underfoot, it goes where you want it to go but still tackles the deep stuff, without being too burly. And a wood core and raised heel give it a bit more of a silky feel on the slope than a men’s ski.
$499; atomic.com

Camber has become a bit passe with the dominance of rocker in everything that touches snow, but Jones created a “three-dimensional positive camber profile” that grips for the hard and variable snow conditions of resorts but has all the quick play of rocker. That construction allows you to rip harder and faster, giving you more confidence when you push the limits.
$529; jonessnowboards.com

Check out more new baselayers for this season here.

Built with Primaloft One insulation, the Polar Shift is a handy reversible mid-layer that’s just as useful kicking around town as it is on a chilly day on the slopes.
$250; trewgear.com

Most manufacturers have only used Polartec’s ridiculously waterproof/breathable NeoShell for light, fast apparel, but FlyLow went burly with a Cordura – reinforced suit that can tackle ski mountaineering and the rigors of the resort.
$500; flylowgear.com

This smart storage unit is the ideal solution for how to keep your boots handy and safe from harm on the road.
$45; mountainsmith.com