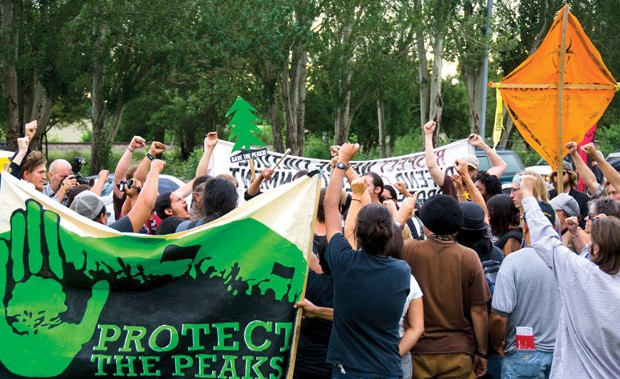 “The introduction of effluent to the pristine holy San Francisco Peaks will not only impact a sensitive mountain environment with rare alpine habitat, but it will also lead to cultural genocide,” says Klee Benally, a Navajo who has spent over half his life fighting for the Peaks. “Our identity is based on our relationship with these sacred places and this—having the source of our spiritual renewal become so contaminated and desecrated—is a direct threat to our survival.”

An initial proposal to make snow from reclaimed refuse water brought forth by Arizona Snowbowl Ski Resort in 1979 created uproar among local citizens and tribes who sought to protect fragile ecosystems and sacred lands. However, in 2005, the U.S. Forest Service approved plans enabling the resort to build new runs and a lift, and to pour up to 180 million gallons of sewage effluent on the Peaks each year.

Litigious proceedings have delayed development until this spring when Snowbowl, despite a pending appeal, began construction. This is not only an issue for indigenous people, but for locals who seek solace and quiet in the mountains. “All the way to the top of Humphrey’s, the highest point in Arizona, I can hear and see the destruction while I hike,” says Pearish Smith, a long-time Flagstaff resident and doctor with the Indian Health Service.

Representatives from Snowbowl declined an interview, but historically, both the resort and the Forest Service claim that due to “inconsistent annual snowfall” this project is necessary to ensure a “reliable and consistent operating season.”

Even as trees fall and the appeal travels through the courts, the fight continues. Certain leaders are calling on the Obama administration for support while others are hoping that new laws could be the answer.

“We will continue to resist because our cultural survival is at stake,” says Benally. “But our resistance will be peaceful and spiritual. We have to maintain that because if we lose it, we lose who we are.”