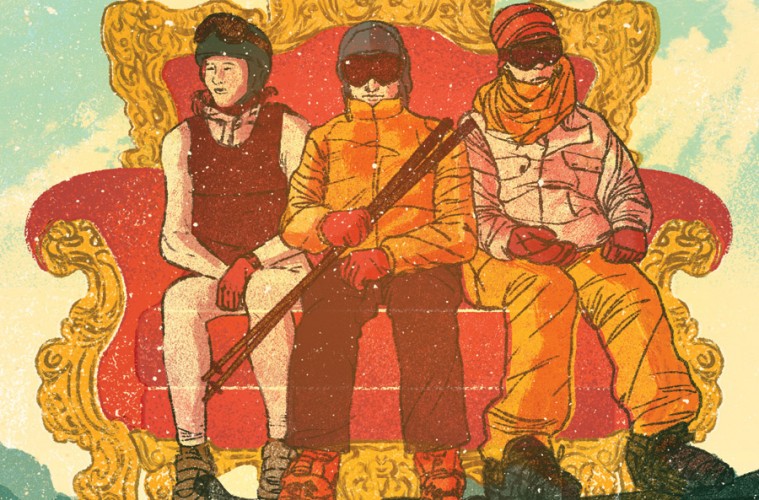 Elwayville: The Beauty of the Turn

It’s always interesting to me that some people want to draw a line or create a difference between the many ways in which they enjoy a snow-covered mountain. They’re skiers, they say, if they get a thrill from the cold, clear click of a locked-heel binding. Or free-heelers, if they love the long elegance of a waltzing turn. Or boarders, if they think the snow is a frozen wave to surf. Then they migrate off together in little fast-moving tribes.

Which is fine, and healthy and fun as hell… both utterly overflowing with and yet still completely devoid of meaning. Or as the great Mohawked master of big mountain skiing, Glen Plake, once said of lapping chairlifts, “It’s the best way I know of wasting time.”

The problem is when one or another of those blissed-out powder pilots starts to chain their preferred mode of descent with all the potential prejudices and trappings of a religion. As if the way they make a turn described the very difference between being a Buddhist, an atheist or a Christian. And worse, that there might be an actual hierarchy or ranking system when it comes to religions, or in this case, the way you make a turn.

Seriously, why? Or better yet, how could it possibly matter which way you prefer to enjoy your on-slope time? Sure I get that some people think alpine skiers are uptight, snowboarders are saggy-pantsed slackers and telemark skiers are just passive aggressive hippies who want everyone to know how hard they’re working. But as much as I respect everyone’s individuality, I prefer to just lump them into one happy community of gacked-out gravity hounds, freeriding down the line.

Because that’s what matters more than any kind of equipment you choose for sliding—that you are free, and you are riding and that your only reason for doing so is because it’s just so much freaking fun. With the celebration of every kind of freeriding in mind, here’s a little bit of praise for every kind of turn.

Alongside mountain biking, snowboarding may be the single greatest action sports innovation most of us will have the pleasure to experience in our lifetime. For a land-locked Colorado kid with limited skateboarding skills, it still lets me feel like I’m surfing, albeit on a giant frozen ocean. And from fat boards to halfpipes and terrain parks to rockered tips and a whole new adrenalized rush of new snowsports participants it absolutely re-energized the time-trapped sport of skiing. (Thank you snowboarding).

I caught a lot of grief for a column I wrote about the trouble snowboarding faced (and is still facing) here three years ago. Only because I thought too much of the media surrounding it was selling attitude, and not the timeless backside blasting beauty of an actual snowboard turn—like in deep powder when you carve up that curtain of snow then dive back through it, like a superhero leaving a vapor trail as he soars off the ground.

When news broke this fall that Black Diamond Equipment was shuttering its telemark boot production, it was greeted with a blaring echo of “Free-Heel is Dead!” headlines. But to quote the mythic American skier Tack Strau, “Skiing is made of gravity and speed. It’s dying all the time.” And to be honest, people have been trumpeting tele’s demise for at least the past 10 seasons.

Lots of folks I know say they left tele because alpine touring equipment got so much better (it did!) and they no longer “had” to make a tele turn. But I didn’t start telemarking to access the backcountry. I got into free-heel because my local hill was having a crappy season, and learning something new seemed like a great way to enjoy the limited terrain. I’ve stayed with it—mostly in the hardpack days of early season, or arcing slush under a warm spring sun—because I love that feeling of stepping from turn to turn, gripping an uphill edge with your pinkie toe, and two-planking down the mountain. Tele has never been about the uphill for me. It’s more about stair-casing the steeps and the fact that tele is the only way you can ever carve more than 300 screaming centimeters of effective edge at any time.

Whenever I alpine ski after a day on my telemark boards, I feel like I’m strapping on the seatbelts in a sports car after touring around in a VW van. There is a level of control on alpine skis, of on-snow authority and pure rocket board speed that, personally, I just can’t find in other kind of sliding. Anytime there’s more than a couple inches of fresh snow, or I’m going to a place I’ve never before, I instinctively put my alpine skis on the roof rack, because I know that’s what I’m most confident on.

My brother likes to say that when it comes to skiers, “there are drivers, and there are riders.” He’s a driver, meticulous and technically proficient, steering every turn. I’m a rider, standing on my skis and watching the world pass by. If you are too, then come on along. There’s room for everyone.

–Elevation Outdoors editor-at-large Peter Kray is the author of The God of Skiing. More than 10 years in the making, the book has been called “The greatest ski novel ever written.” Buy it at mirabooksmart.com