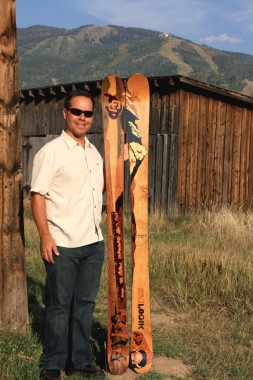 buffed out: Don Mclean shows off the boards that he hopes will raise $150,000 for the CU athletic department. Courtesy of College Skis

Shred with the Herd, Proud Buffs now have their own ski.

Like the Colorado Buffalos? Now you can show your support on your skis, thanks to two entrepreneurs smitten with the black and gold.

Don McLean, a CU graduate from 1977, recently teamed with partner Luke Dudley to launch a University of Colorado-themed ski to benefit the CU Athletic Department and Ski Team. The ski features inlaid wood designs of the Flatirons, the CU athletic logo and CU’s loveable mascot, Ralphie.

“The idea evolved after attending the CU Ski Ball last fall,” says McLean, whose daughter races for the CU Ski Team. “We wanted it to be the perfect all-mountain ski for Colorado.”

McLean came up with the brainstorm after realizing that CU gets less than 4 percent of its annual budget from the state and that the Athletic Department could certainly use additional funds. “It’s the right thing to do,” he says, adding that CU Athletic Director Mike Bohn has a pair mounted on his office wall. “So we went to work on getting the perfect design, manufacturer and product in place.”

Knowing that those rooting for the black and gold like to ski blacks, they searched for a ski that would rip, which led them to partner Ski Logik, a company known for its handcrafted, environmentally conscious wares. “We could have thrown the design on a cheap pair of skis, but that would undermine the cause,” says McLean, also a former racer. “Instead, we wanted skis that we would like to ski on.”

The result is Ullr’s Chariot Twin Tip (168, 178, and 188cm, 101mm underfoot), Ski Logik’s signature all-mountain model with Black Locust sidewalls and quadraxial Vektor 8 carbon fiber/fiberglass construction; and a women’s version called the Goddess Twin Tip (157 and168 cm, 101mm underfoot), made from similar construction. The duo hopes to raise $150,000 for the university by the end of the year.

“I have wonderful memories as a CU alum,” says McLean. “And I think other alumni will want to rekindle their love for the institution as well by having a special pair of these boards.” And how do you best hot wax them, you ask? With their graphic’s namesake: a flat iron. collegeskis.com