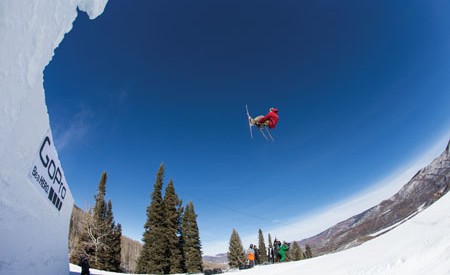 Brown is the New Gold: The Bobby Brown Interview

Freeskier Bobby Brown has it all, right? He’s sponsored by Red Bull and has won three gold medals, in slopestyle and big air, in the X-Games. But he has not been able to compete in the Olympics… until now. We had a chance to talk to the 22-year-old, Breckenridge native about the first time freeskiing will be allowed in the games, what he does to train and his competitive spirit.

This is the first time freeskiing has been in the Olympics. What are you most excited about? The TV coverage, the fans, the judges or the other athletes?

I’m excited to be able to show the whole world what we do. It’s going to bring a fresh new perspective to the Olympics, and I think people are really going to be excited about halfpipe skiing. I went to the London Olympics and saw a few events. It was pretty amazing seeing the amount of energy and excitement around the competition. It would be amazing to ski in an environment like that.

Do you know who the judges will be?

I’m not sure who the judges are specifically, but I know they all will have to be FIS (International Ski Federation) certified.

What run will you do in the Olympics?

I have to make the team first! That said, I want to take this pre-season and get a bunch of different options down. The course looks amazing, so there will be no shortage of insane runs. Hopefully I can learn some new tricks at Breckenridge early this season and debut them in Sochi.

Are there any other competitions before that you are excited about?

I can’t wait for the Dew Tour at Breckenridge—one of the qualifying events for the U.S. It has always been my favorite contest because it’s at my hometown mountain. The course is always built to perfection and no mountain anywhere in the world has a course like it.

Who will be the athlete that you will try hardest to beat?

Tom Wallisch is the favorite in my mind—he is so on lock. He can do any trick incredibly effortlessly and with a ton of style.

How do you think your run will beat the other guy?

I just have to go big and send it! Just hold nothing back, and put it all out there.

What keeps you in shape before the ski season?

I am in the gym a lot. After a couple of ankle injuries, it’s very important to keep up a high level of fitness in order to compensate for the weakness in my ankle. I like to ride the bike as well as jumping on the trampolines—trampolines are an awesome way to train while not being able to be on snow.

What’s your favorite place to ski?

Breckenridge. On powder days, it’s awesome to go up on the T-bar and rip some laps. When it’s sunny, the park is always perfect. They groom it at four in the morning, so right when it opens at nine it is pristine and ready to go. I grew up skiing there and it shaped me to be there skier I am today.

What are you good at besides halfpipe skiing?

Here is a little of what Brown can and will do at the Olympics:

Check out the rest of our home-state Olympic hopefuls here.