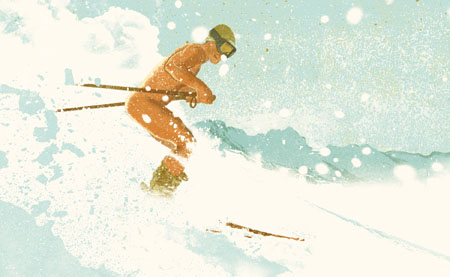 Blast From the Past: Ski Memories

Winter is my favorite season. It’s when Colorado seems the most alive, filled with the brisk bustle of people hurrying from bright bars to warm beds, the mountains beam like white castles on the horizon, and all those skiers and snowboarders in blue, pink and purple coats zip by like fast flowers underneath the chairs.

When I was growing up, my father was a volunteer ski patroller at Vail. And every weekend we would drive up I-70 to ski Prima, Highline, Blue Ox, Look Ma, Giant Steps, International and Ramshorn, skiing faster and faster every year. I got to meet President Ford there once at the top of the Eagle’s Nest Gondola. I got to steal a kiss from the first girl I ever loved on Chair Four. And I laughed until I cried when my future cousin-in-law took off all his clothes and skied through Mid-Vail. But one of my favorite ski memories was getting first tracks on Forever in the Back Bowls, floating through untracked powder as if frozen thistles were exploding everywhere.

Anyone who ever got to ride the Denver Ski Train to Winter Park on Saturdays know how sad—and ridiculous—it is that we don’t still enjoy this amenity now. Especially with I-70 so horribly overloaded every weekend. Each ride was like a rolling soda pop social with all the kids you could meet (and all the candy you would eat), and as soon as you arrived you had your own shred posse ready to terrorize the hill. A few of my best friends were made on that train, and are best friends still. We got to be pretty good mogul skiers whacking all those Mary Jane bumps. The memory that comes back the most though, is of the blind skier who came whipping by us with his guide on Ambush. Getting schooled never gave me such a thrill.

For decades I thought Ajax was the only mountain in Aspen, bopping down Gentleman’s Ridge or the Face of Bell and finishing right at the top of the storied alpine town with beautiful people everywhere. Once, after a day skiing there with my college girlfriend, I thought I achieved the Aspen dream by making out with her in the hot tub while her parents mixed cocktails indoors. More than a decade later though, I got a bigger kick skiing Snowmass with a childhood buddy, and dropping into AMF with an instructor who had taught there for 40 years. On the way home, in the left lane through Glenwood Canyon, a guy wearing a motorcycle helmet driving a beat-up sedan passed us on the right like we were standing still. We finally caught up to him near Edwards, realized he had no front windshield, and backed way off the accelerator as he roared away down the road.

When my wife’s parents moved to Salida, we quickly fell in love with Monarch Mountain, reveling in its open runs and the friendly nature of both the people who work on and visit that hill. Runs such as Mirkwood Bowl, High Anxiety and Curecanti are particular favorites, especially with a couple inches of fresh snow. But the day Marketing Director Greg Ralph asked if I wanted to go cat-skiing with ski legend Scot Schmidt blew that all away (even if the brother-in-law who I brought along kept poaching first line until I had to ask him to chill). The terrain was fantastic, the snow was perfect, and Schmidt skied everything just like he does in the movies, with an inimitable sense of speed, grace and control. He also couldn’t have been nicer, and for the last run he and I, along with Ralph and one of the guides, skied far past the snowcat boundaries, deep into old growth glades, then down to the highway where a van brought us back to the hill.

Last football season’s playoff loss to the Baltimore Ravens left a hole that hopefully this season will fill. I still ended up rooting for them in the Super Bowl however, because I don’t care much for the 49ers and the Ravens are in the AFC after all. I also kind of enjoyed not being too stressed about watching the Super Bowl, and met up with a friend at Loveland, ripping around under a perfect blue sky in search of soft snow. After passing Loveland by for quite a few years, opting for other areas up the I-70 carpark corridor, I had forgotten just how good the skiing there can be—and how relatively tourist-free, with the slopes filled instead with Denverites, and Boulderites, and Evergreenies, and the chance to share some hometown friendly conversation on every chair. I can’t wait to get back there this year, because it feels like home.

As for riding the chairs at Copper Mountain, Arapahoe Basin, Ski Cooper and Beaver Creek (especially while watching the adrenalized glory of the annual Birds of Prey World Cup stop), or skinning or hitching for freshies on Loveland Pass and Berthoud Pass, I’ve got plenty of memories there as well. And I plan on making a few more this year. I can’t wait to get started. Let the snow fall!

Peter Kray is EO’s editor-at-large and co-founder of the Gear Institute (gearinstitute.com). His first novel, The God of Skiing, is due out soon.