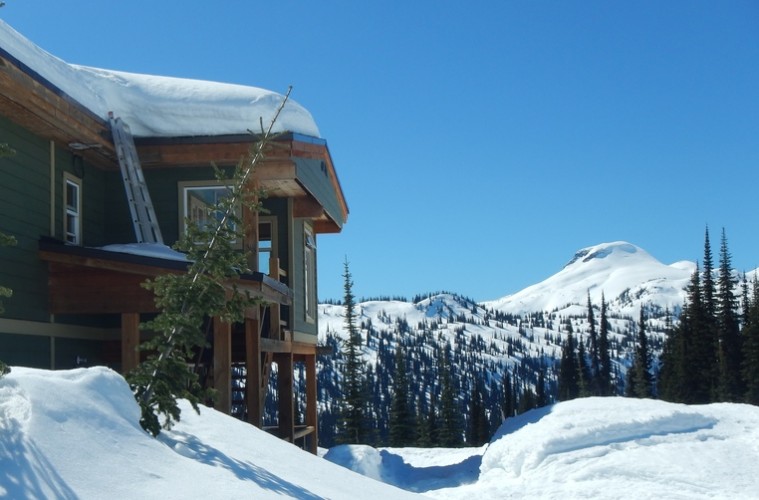 Backcountry Skiing in BC

Down in the dumps when your local ski resort closes for the season? Beat the muddy season blues with spring backcountry skiing at British Columbia’s Sol Mountain Lodge.

It’s a clear, crisp morning in early April. Toots and the Maytal are wailing a laid-back reggae tune. Lodge manager, Irene, is whipping up a batch of double chocolate cookies. Chef Bernie chops garlic for another gourmet dinner ahead. It’s 8:40 am. Blazing morning sun illuminates distant white peaks. Eager to get out there on their Alpine Touring gear, a diverse group of 25 skiers, from across North America and as far away as Kaui, have already wolfed down a hearty breakfast, put together a substantial packed lunch from the buffet bar and are heading out into a classic bluebird day. Lots of backcountry skiing still to be had in Monashee Provincial Park.

Plan for the Day

The goal for one group is the top of Sol Mountain. It’ll take three hours gliding along on climbing skins to get there. Once at the summit they’ll strip skins off their skis, put jackets on and point their skis downhill. Having earned their turns, they’ve gained the right to ski down whooping and hollering through the spring corn snow. Later, homeward bound, there’s more downhill runs with names like Laid Back and Starbucks on the route down to Bill Fraser Lake. Their day will finish with a short steep climb back to the lodge.

A smaller second group is making their way to an area known as Baldur Zone, closer to the lodge and notorious for its steep chutes. Both groups will be sure to make it back in time to gather at the lodge bar for cold beer, a selection of BC wine and appies like fresh bruschetta or flatbread pizza at 5 pm to stave off hunger until dinner at 7 pm.

The adventure began yesterday morning with a jaw-dropping twenty-minute helicopter ride from Revelstoke, British Columbia over the jagged spines of the white-capped Monashee Mountain Range. For those flying in to Kelowna, a shorter flight is also available from Cherryville, a small outpost near Vernon, BC.

After a thorough review of avalanche rescue skills, including practice with transceivers locating buried beacons, working with probes to finalize the search, then forming teams to dig them out with small portable shovels we enjoyed a quick lunch followed by an afternoon of skiing.

The orientation included an easy climb up the Bunny Slopes, past Sol Lake and beyond. On a north facing slope called Chardonnay, what’s not to love about runs named after wines, we found some still cold snow for a couple of long powder runs. After climbing back to the ridge again a mellow downhill tour led the way back to the lodge. Nursing blisters, despite pre-taped heels, I’ve opted for an afternoon ski with Irene, with whom I’ve enjoyed skiing in I the past. After five months of downhill, cross county and backcountry skiing I’ve earned the right to a leisurely tour across the meadow for a few runs on more wine inspired slopes, like Shiraz and Merlot, leading up to Aaron’s $2 special, a glass of BC house wine. After all, pacing for the next three days is what it’s all about. Apres spring skiing appies and beer in the sun

The comforts of private rooms, hot showers and indoor bathrooms and the hospitality and ski guiding expertise of owner Aaron Cooperman have made Sol Mountain Lodge the premier destination for powder ski touring since its inception in 2004. www.solmountain.com