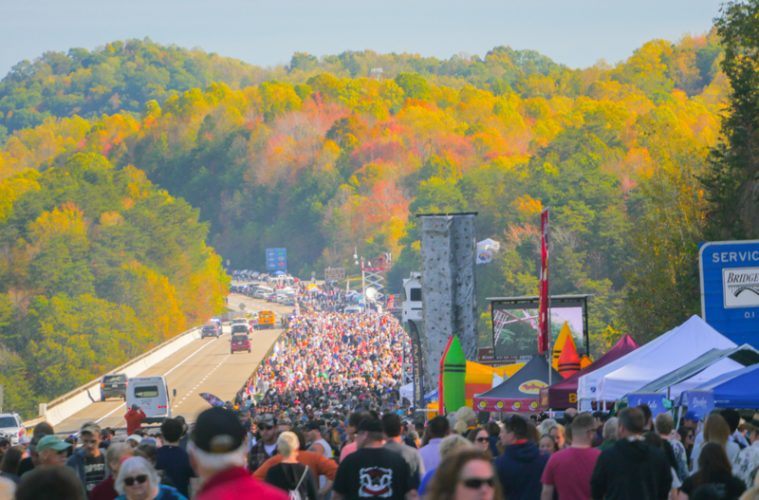 Ladies and Gentleman, our twentieth and final festival of the Live Outside and Play 2017 tour has come to an end. It’s been a long, incredible and exhausting journey but we wouldn’t have it any other way. In true LOAP fashion, we went out with a bang with one of the largest extreme sports festivals in the world. That, of course, is Bridge Day. For one day every year, the New River Gorge Bridge plays host to six hours of safe, legal, BASE jumping. We’re no strangers to the New River Gorge. The bridge, located in Fayetteville, West Virgina, is surrounded by world-class rock climbing and whitewater. In fact, this was our 3rd time visiting “The New” this fall.

The act of BASE jumping is not an illegal activity. In the United States, however, it is almost impossible to find a place where you can legally BASE jump. For those unfamiliar, BASE jumping is jumping with a parachute from a fixed object. It is illegal in virtually all U.S. cities and National Parks. For that reason, every year on the third Saturday of October, hundreds of BASE jumpers flock from around the world to the New River Gorge Bridge. Their goal is to huck themselves off the 876-foot  modern marvel towards the water below. Bridge Day is the only day of the year where the bridge is actually closed to traffic and spectators can legally walk out onto the world’s second largest single arch bridge. This feat doesn’t come easy. The act of closing the bridge, coordinating hundreds of vendors and 80,000 attendees requires careful planning. The bridge is a vital artery for traffic in the region so the closure is minimized to a 10-hour window.

For that reason, we had to wake up earlier than we have in quite a while to get in line for load-in. The early load-in not only helped everyone get where they needed to be in time for the 9 am start, but it allowed us to catch one of the most beautiful sunrises of the year.

Most of the day was spent at the booth talking to folks about the magazine and all of the great gear we brought. With the help of some of our fearless Blue Ridge Outdoors friends, we were able to break away in the afternoon and drive down below the bridge to the landing zone. It’s far more peaceful below the bridge. Traffic was prohibited so aside from the folks who hiked or biked into the gorge, the place was empty. A far cry from the hustle and bustle of the massive crowd above. From below it’s much easier to see how far the jumpers fall before pulling their parachutes. Of course, Bridge Day isn’t only about BASE Jumping. If you have the desire and are lucky enough to have your name drawn in the lottery you may also repel down below the bridge. We could see tiny humans dangling from the bridge’s catwalk. It was quite the sight to behold and something that we would really like to try. Our festivals might be done for the year, but we’re not quite finished. We’re headed south to see some friends and help give back! Thursday, October, 26 we’re teaming up with The Hub and Pisgah Tavern in Brevard, North Carolina to help clean up Pisgah National Forest. Then, on Saturday, October 28th we hit Greenville, South Carolina for a little trail maintenance with Greenville County Parks & Rec. If you’re in the area, as always, we’d love to see you!!