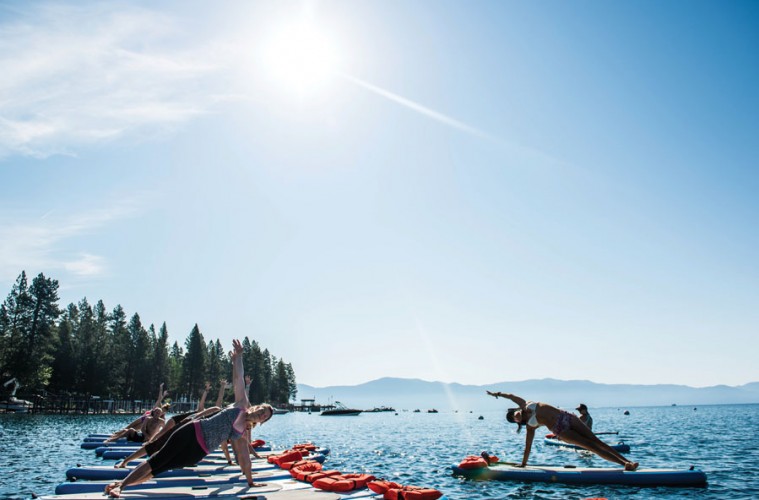 Yoga on a stand-up paddleboard may sound intimidating, but get out on the water and you will find it easier than imagined. Here are seven reasons why you should give it a try.

One of the first things I learned about yoga was how vital it is to feel the ground beneath your feet. So the first time I attempted a downward facing dog pose while teetering precariously on a stand-up paddleboard (SUP), I was pretty sure I’d lost my mind. Why the heck would someone practice yoga on the water? Well, let me tell you exactly why:

#1 Water is where we began

Water covers more than 70 percent of the surface of the Earth, but about 64 percent of the population is afraid of open water. As I moved painstakingly into that first pose, I quickly reminded myself that our first environment is the life-giving liquid of amniotic fluid, so some part of me felt right at home in that floating down dog.

#2 Water encourages embracing rather than avoiding

The practice of yoga encourages us to move toward things we might rather move away from. It invites us to become curious about the places where we tense up, both in our bodies and in relationships and other life situations. SUP Yoga is a great practice for many, like me, who tend to get into the habit of putting our yoga mats in the same place, for the same yoga classes. On the water we become aware of the things that we do in attempt to create an external sense of stability. After all, why do I want a yoga practice that’s only good when things are stable?

I find that being on the water, and the instability of practicing yoga on the board, highlights the areas in which I have instabilities and asymmetry. For example, when practicing downward facing dog pose on my standup paddleboard, I am acutely aware that I place more weight into my right hand, which causes the left side of my board to pop up. If I tense up, it furthers the instability of my balance on the board, but when I breathe and relax, I can tune into these nuances and stabilize.

In SUP Yoga, we’re asking people to trust, not to tense up, to create balance out of releasing, rather than clinging. On the paddleboard, this is most evident in our toes. The most common mistake is toe crunching. When the water and waves move beneath our boards, there’s a tendency for our toes to tense up and try to grip the board. The yogic practice, especially on water, is an invitation to align the placement and movement of our bodies with the fluidity of water, much like the movement of our breath. Yoga postures (called asanas) are reflections of the natural world. We call the poses things like tree, cobra and pigeon. When we align our bodies into these shapes in the midst of nature, rather than indoors, we have a deeper opportunity to experience a sense of interconnectedness. The root of the Sanskrit word “yoga” is “yuj” which translates to mean “union.” For the last eight years that I’ve been teaching yoga, I’ve consistently said to students, “we really should be practicing outdoors, in nature.” For example, at the Wanderlust Festival at Squaw Valley SUP Yoga practicioners actually got out and experienced the big blue of Lake Tahoe, instread of just staying under the tent.

#6 Water provides a reprieve from overstimulation

SUP Yoga invites a much-needed break from technology. We are overwhlemed by over-stimulation. With the increasing dependence on technology, people are required to do less physical activity, at the same time increasing mental activity. While often useful, if not managed carefully, this can manifest into poor health.

#7 Practicing on the water
is practical

If I only have a practice that is useful when things are stable and contained, is that a very useful practice? As we take the shape of Savasana (corpse or surrender pose) in SUP Yoga class, I trail my fingertips in the cool water, and close my eyes. I feel the rippling waves from a far-away speedboat, lapping under my board, and recognize that if I only know how to mediate when things are smooth, I’m kinda screwed.

Whatever the reasons are that people show up to a SUP Yoga class, I always hope that the ground feels different after they’ve practiced on the water.

Lisa Fierer teaches yoga, SUP yoga and rides her motorcycle in Boulder, Colorado. Read about her upcoming memoir, Thirst, and find her class schedule at lisafierer.com.

—All photos by Ali Kaukas for Wanderlust Festival