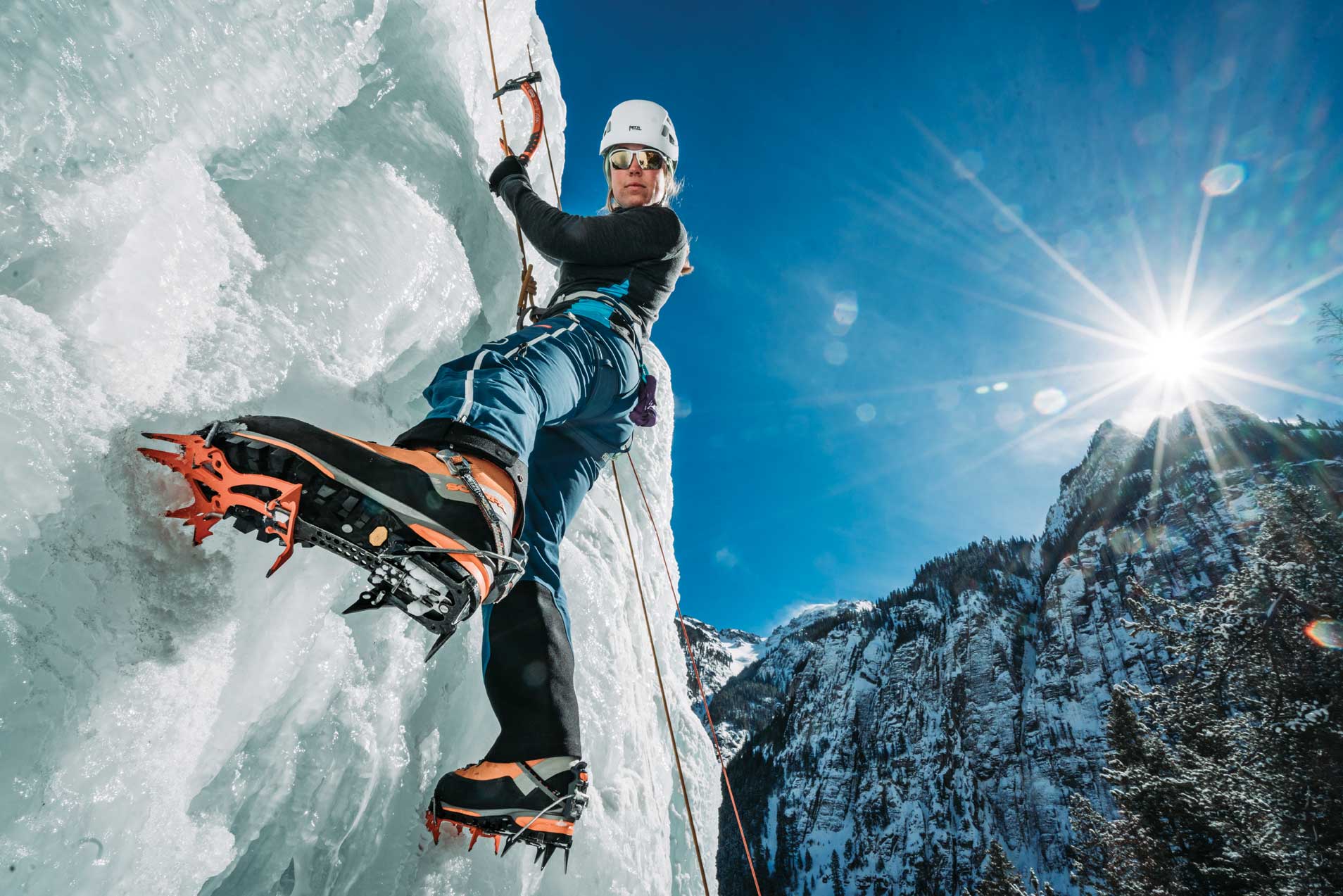 kicking and picking Morgan tilton hones her skills at the ouray ice park. Don't miss the big event here on january 23-26, 2020, when climbers from across the globe will convene on these frozen walls. Photo by Xander Bianchi.

Get schooled on ice from the park to the wilds of the San Juan Backcountry.

Dressed in snow the and red sandstone and shale cliff band curls around us like the boatman of an hourglass. I slide the rope through the belay device with my eyes on Lance Sullins, an American Mountain Guides Association (AMGA) Certified Rock Guide and Apprentice Alpine Guide, who leads our backcountry multi-pitch ice climb on the periphery of Ouray, Colorado.

Shwing, thump, thump: Sullins strikes the frozen waterfall with his ice tool, followed by two crampon toe kicks. Fragile chandeliers of ice decorate the uneven face. Sullins stops to place an ice screw and a puff of snow cascades like smoke down the ice. The morning is so still at -6 degrees Fahrenheit, that I hear the minuscule granules settle below the frozen skeleton. Moments later, Lance calls, “Off belay, Morgan!” I unclip my belay device, yell back, grab my ice tools, and posthole to the base of the vertical ice.

This is my fourth full-day climbing. Despite growing up in the San Juan Mountains, I’d never experienced the Ouray Ice Park, one of the largest human-made climbing venues in the world. But after ascending a practice wall in Banff National Park, in 2018, I became excited about ice climbing as an avenue to discover new corners of my backyard. Enter: Peak Mountain Guides (peakguides.com), owned by Sullins, which offers an introductory program for backcountry ice.

According to Rock and Ice magazine readership surveys, ice climbing participation grew by 25 to 30 percent between 2018 and 2019. Nevertheless, the sport has barriers: Educators like Sullins can mentor newcomers like me, while managing the risks including avalanche danger, pricey gear, and route-finding—all of which can be tricky for the untrained. Since 2007, the percentage of ice-traditional-and-mountaineer climbers among the U.S. population has remained at 0.8 percent, now 2.5 million climbers, according to the 2018 Outdoor Industry Association’s Outdoor Participation Report.

My exploration of the sport kicked-off in Ouray’s Ice Park, followed by three days in the backcountry. Day one, Sullins taught me the isosceles triangle form—wide stance, forward hips—and to trust my feet, via a single ice-tool drill. After six lines, he encouraged me to drop into Pic o the Vic: a 150-foot steep, sustained WI4 that starts with a committing solo rappel.

Halfway up and gripped, I fall beneath an ice-stalactite. Though shaken, I am fine. I pluck my way back on course, and continue. I realize ice climbing hinges on consistent, methodical movement and positive more than physical strength. In a way, it’s more accessible than forms of climbing that depend on technique.

Finally, on our lastclimb in the ethereal amphitheater, I scale the column, unstrained and with a quiet mind. Close to 90 feet up, the ice bulges and thins. I observe the flowing water beneath. You only need a finger-breadth to hold you, I remind myself. I decide to trust that inch.

Seconds after, I top out and exclaim, “This climb is incredible! What’s it called?” Sullins responds, “I’ll tell you if you keep it a secret. The local community ethic is for this sacred place to be unwritten and untold.” I agree. The most magical places are best revered in person.