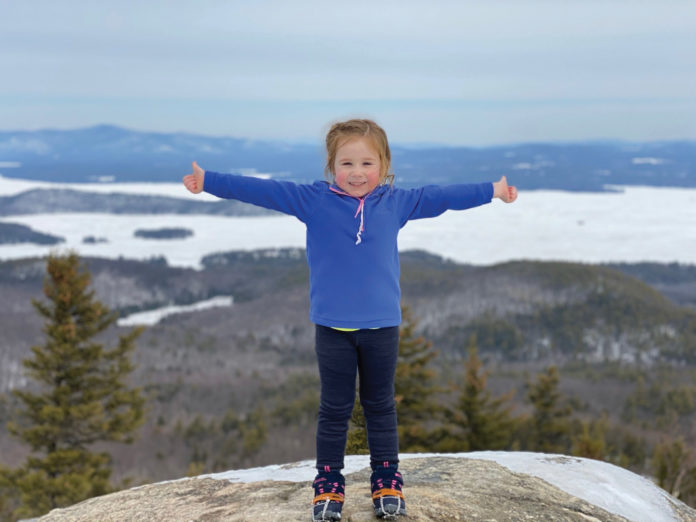 This 4-year-old hiked more than 250 miles when she ticked off new Hampshire’s highest peaks in just six months.

Over the years, outdoor magazines like ours have covered an endless number of athletes who hike far, fast, and up in record time frames despite nasty conditions and gnarly terrain. Not enough of these individuals identify as female. The number that identify as 4 years old? Infinitesimal.

But one New Hampshire native is bucking the trend. Starting last March, Scarlett Torgerson—known on the trail as “Little Foot”—along with her grandmother Kim Lesnewski, hiked all 48 of her state’s 4,000-foot peaks (that’s 259.05 miles and a whopping 85,072 feet of elevation gain). And they did it in 6 months.

Scarlett got her first taste of hiking at just 18 months old. Lesnewski, who’s a member of New Hampshire’s Lakes Region Search and Rescue, remembers letting Scarlett loose on the trail up to Piper Mountain out of curiosity, “just to see what she could do.” They allowed the toddler to choose her own course, and after about 90 minutes, the tiny tyke had hiked 1.3 miles and 970 feet to the summit. When she hiked back down. “We thought, ‘Huh, maybe we’ll see what happens,’” Lesnewski remembers. “So, we just started taking her out.”

Their hiking habit continued through Scarlett’s second year and picked up momentum in April 2020, when COVID closed her preschool, and Lesnewski’s work schedule lightened considerably. By the end of February 2021, Scarlett had hiked the Belknap 12, a collection of 12 peaks in New Hampshire between 1,660 and 2,380 feet.

On March 10, Scarlett conquered her first 4,000-footer, leading to her initial idea of completing five of New Hampshire’s 4,000-foot peaks within a year. Soon though, that goal turned into completing all 48 peaks by the time she was 5 years old, which was just a short six months away.

With long days and high mileage (their longest day: 16.5 miles), Lesnewski constantly checked in with Scarlett to see how she was feeling. “Every hike we go on, I give her the opportunity several times to turn around,” Lesnewski says. “I didn’t ever want her to feel pressure.”

Now that those 48 peaks are in the bag, Scarlett has become the first ambassador for a program from Adventure Ready Brands (parent company of Adventure Medical Kits, Ben’s, and others), appropriately named Adventure Ready Girls, that aims to get 1 million girls involved in outdoor activities by 2025. “Scarlett is so inspirational to girls and parents with her love and joy of hiking,” says the brand’s director of e-commerce, Lindsey Gauthier, of the decision to highlight the young hiker.

We’re among them, Scarlett. Hike on.