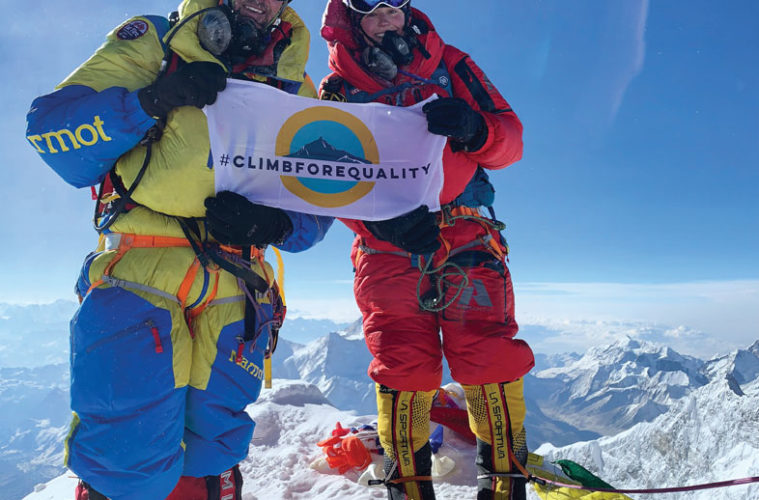 Climbing for equality only 10 percent of those who summit mount everest are women. ski mountaineer caroline gleich reached the top of of the world in may in order to inspire other women to make that number rise. / PHOTO courtesy Caroline G

Mount Everest got a lot of attention this spring—with both successful summits and traffic jams in the death zone. How did we get here? And where are we going??

june 7, 1922: Date of first recorded deaths of explorer’s attempting to climb Mt. Everest (during the second recorded attempt of humans trying to climb it). Records show that seven people died, all Sherpas. In 1924, the Brits tried again and were again unsuccessful. And in 1934, yet another Brit named Maurice Wilson attempted to climb the mountain solo. Wilson wanted to promote his belief that the world’s ills could be solved by a combination of fasting and faith in God. He died in his attempt, and his body was later found, “a short distance from Camp 3,” according to Climbing Magazine.

May 29, 1953: The date Tenzing Norgay and Sir Edmund Hillary became the first climbers to summit the 29,035-foot peak. Only four other people would summit that decade, all within short windows in May.

8: Number of people who died on Mount Everest when Jon Krakauer climbed it for his famed Outside magazine assignment in 1996. At the time, this was the deadliest ascent in history. The years 2006, 2014 and 2015 would prove even deadlier.

19: Sherpas killed in the Khumbu Icefall in 2014. As a result of this earthquake and ensuing avalanche, summit totals were the lowest since 1997. From Tibet—an increasingly popular access to the mountain—over 100 people summited. From Nepal, only six did, with aviation assist over and above the disrupted icefall.

319: Permits issued for Mount Everest in 2015, a year after the Khumbu Icefall break.

19: Climbers killed during a 7.8 magnitude earthquake that decimated large swaths of Nepal that year same year.

298: Permits issued in 2016, just 10% fewer than in 2015. Economically, this was good for a country that relies heavily on Everest traffic for its GPD. But Colorado big mountain climber and Everest vet Alan Arnette notes, “The more Everest takes lives, the more people come.” Despite abnormally warm temperatures on the mountain in May, resulting in greater risk of avalanches and ice shifting in the Khumbu Icefall and above, the crowds came. And the Icefall Doctors, who pick and establish a route through the ice flow as part of Everest’s popular South Col route, established one, using seven ladders instead of the normal 20, to get traffic moving up the mountain.

600: Number of summits in 2016; a “normal season,” reported Arnette. Some 455 climbers summited, and Arnette called it a “good year,” but with a cautionary note. “In speaking with multiple climbers, Sherpas and guides, they all make the same points: There are too many people on Everest who lack the basic mountaineering skills to survive a major weather event or their own misstep when it will undoubtedly occur. And there are too many ‘Sherpa Guides’ who simply don’t have the experience or skills to be of aid to those inexperienced climbers when the inevitable occurs.”

11: Number of climbers killed on Everest during the week of May 20 of this year. As has been widely reported, some expedition companies blame the glut of climbers, resulting from unregulated permitting by the Nepal government, stalling out in the death zone for creating dangerous conditions. And climber Robin Fischer, who collapsed and died after summiting on May 25, portended this potential problem in an Instagram post on May

19. “Around 700…people will be looking to summit from Tuesday the 21st onwards.” Hoping to avoid the crowds, he made his bid on that Saturday. “I am hopeful my decision to go for the 25th will mean fewer people. Unless of course everyone else plays the same waiting game,” he wrote.

0: Unofficial number of climbers who summited successfully after the fateful week. But as Everest climber Jake Norton points out, the peak itself isn’t the culprit: “It’s a mountain. It’s a place where dreams are realized, and where they’re crushed. Lives are fulfilled here, and they’re extinguished. It is a place of beauty and sorrow and spinelessness and heroism and all the shades and adjectives reflected in humanity.”

1: Number of black African women to summit Everest. South African Saray Khumalo became the first when she stood atop the world’s highest point on May, 16, climbing for her non profit, Summits with a Purpose to raise funds for the Mandela Library and Dr. Thandi Children’s Foundation. participateforgood.com/projects/saray-khumalo

10%: Approximate number of women who climb 8,000 meter peaks. Ski mountaineer Caroline Gleich reached the summit of Everest on May 24, ascending the less popular, and less crowded Northeast Ridge route, along with partner/fiance Rob Lea, as part of her “Climb for Equality” campaign to highlight the role that male mountaineers and people of all genders can play in advocating for women’s rights and making sure this number goes up.