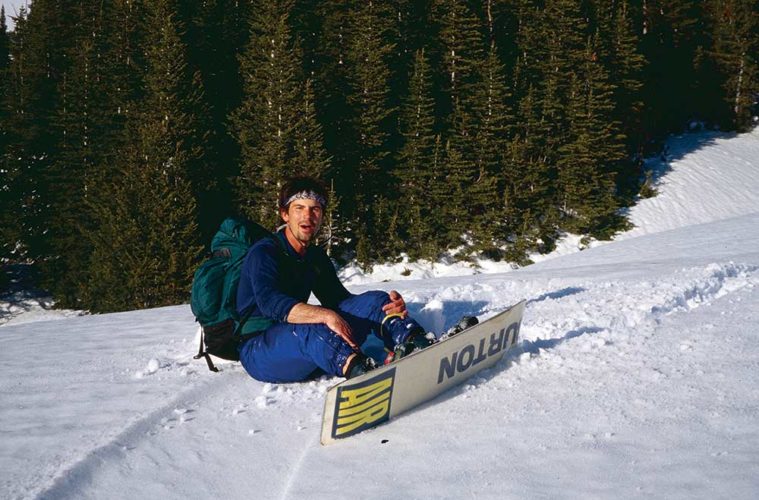 How Jake gave us the tools to rethink the way we play outside.

The first snowboard I rode was a Burton Performer Elite, a seminal stick with a big tapered nose that was completely flat in the back. The bindings were little more than straps, and I wore the leather construction boots that dudes in the ’80s used to tromp around in unlaced with acid washed jeans tucked into them. I probably snowboarded in jeans. The board was not technically mine. It belonged to my friend Steve, and the first time out, he and I switched off riding it, but he sort of lost interest and it ended up in my garage—because I loved it.

Back then, snowboards were still in uncertain status at most resorts and besides we were high schoolers from the Jersey Shore who didn’t have the cash for ski resort vacations beyond the occasional school trip, which was honestly more of an excuse to party, or Vernon Valley Great Gorge (now known as Mountain Creek), the Garden State’s premier ski hill—and I love Jersey but I will let that phrase speak for itself. So we rode in horrible spots. I guess you could call them “backcountry” because there were no lifts, but there was certainly no avalanche danger since these hills had more grass than snow (Steve was pissed at one point when he found out that I put a dinger in the base of that board that he forgot was in my garage).

It was a thrill, free from shelling out money to have fun, and a way to to both feed the teenage need for dumb adrenaline, and get out and breathe in the beauty of the woods of the East Coast in the dead of winter.

When I moved to Montana in my 20s, I would ride my Burton Air at the resorts, but I couldn’t shake wanting to go back to my roots and explore with that board in these real mountains. Snowboarding the backcountry took work in the days before splitboards. My friend Jay and I would bootpack for sweaty hours with our boards strapped to our backpacks, whacking the backs of our heads with every laborious step. But it was worth it to be–we think—the first to snowboard peaks in the deep wilderness of places like the Madison Range. I finally gave in and started skiing more when I was planning on a mountaineering trip to Denali with some friends and was told that I would have to learn to telemark ski to keep up on the trip.

I enjoy the mountain and the backcountry any way I want these days, but it all started with that Burton Performer Elite. Snowboarding has always been about this willingness to buck the norm. When Jake Burton Carpenter, who passed away in November, founded the brand, he didn’t want to change the world. He just wanted to have some fun in the Vermont woods the same way he would on a beach, riding the mountain like a wave. That basic love of movement and flow, and the rebel spirit of snowboarding have defined what it means to go outside and play.

Get on a snowboard this year. Go with friends. It doesn’t have to be perfect or pretentious. Laugh. Scare yourself a bit. Do something weird. It’s the best way to celebrate Burton’s wonderful legacy.