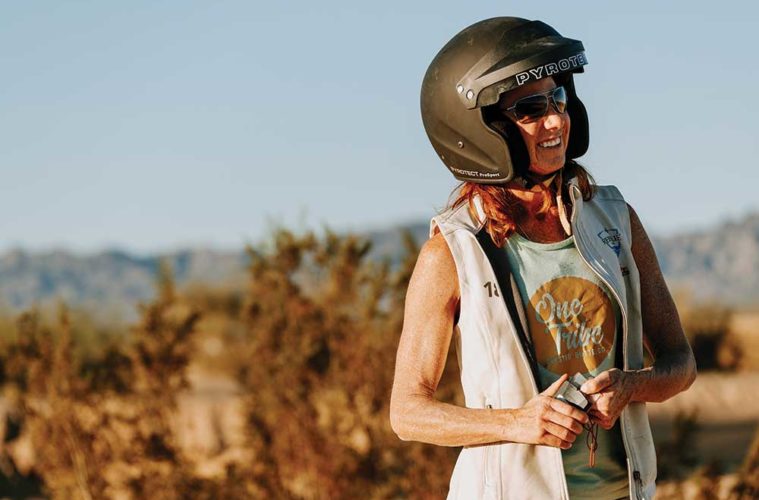 Big-mountain legend and pioneering skier Wendy Fisher still rips 25 years after her first Warren Miller appearance. Here’s how she manages to do it all.

Wendy Fisher will be the first to tell you: She still rips. That confidence should come as no surprise to anyone familiar with the big mountain skier’s scene-stealing parts in Matchstick Productions and Warren Miller ski flicks throughout the 1990s and early 2000s, when she was widely lauded as the most dominant force in women’s freeskiing.

All that success came after her ski racing career, which culminated with a trip to the 1992 Winter Olympics in Albertville, France. Oh and she also won the World Extreme Skiing Championships in Alaska. Twice. More recently, Fisher has been dubbed a “Supermom” by Salomon TV—a film bit she won a Powder magazine “Best Short” award for in 2014—and a resort ambassador for her home mountain of Crested Butte. The now 48-year-old mom of two sat down with us to talk about her philosophy of saying yes, what it’s like being choppered to the top of an Alaskan spine and her newest adrenaline kick.

Had you always dreamed of being a professional skier?

I remember I did two school reports about being a flight attendant when I was in elementary school because I had a fascination with traveling, and when I started ski racing and traveling more for skiing I just thought, “I love this and this is what I’m meant to do.”

You still travel a lot for work. And you’re a mom to two teenage boys. And you’re a resort ambassador for Crested Butte Mountain. How do you manage your busy schedule?

I went to Europe twice last winter to help coach groups with [Austrian ski racer] Franz Weber, and I was also in Whistler, Utah and Steamboat skiing with private clients and groups. I spent International Women’s Ski Day at Silverton—it was really fun. I gave a talk the night before their women’s ski clinic, and I got to take my sons on their first heli-drop. I had been dreaming of that day, but I didn’t think it would happen quite so soon! I’ve been teaching ski clinics at Crested Butte for the past 10 years, and if they need me to show someone around the mountain I try and jump on those opportunities when I’m free.

And you’re gone for part of August every year, too.

Yes, Chris Davenport spearheads a South American ski camp called the Superstars Camp in Portillo. Cody Townsend, Ingrid Backstrom, Mike Douglas, myself and Chris [Davenport] are all coaches, and it’s always a really good time. It’s a pretty advanced camp so we’re all ripping around and skiing really fun terrain, and it’s pretty much all off-piste.

What’s it like being flown onto to a massive mountain face you’re about to ski?

I’ll be in the helicopter and I’m heading to this face that looks 100 percent vertical, and in my head, I’m like, “What the eff am I thinking? Why do I do this?” And then I get on top of this peak, and I have a mantra that I go through on almost every ski slope to build up my ego and get myself back in the game. I say, “I’m skilled enough to be here,” and I deserve to be on this peak. But when you roll over that face, I mean, it’s still a mystery until you get to the bottom and you’re safe.

And you’ve gotten into off-road navigation rallies, most recently at the 2018 Rebelle Rally, where you spent 10 days driving a Jeep between Lake Tahoe and Glamis, California, without GPS or even a cell phone. Are there any parallels between that and skiing?

I understand lines, so driving in the sand dunes was pretty similar to skiing, and I could tap into that skier mentality and think, “Okay, I need to look ahead, I need to be spontaneous, I can’t stop in the wrong spot,” but it was also very different. My experience with skiing probably helped me get over fear or doubting myself in the rally, but there were times when I was asking myself, “Why do I say yes to this stuff?” It’s a different fear, but I still use what I’ve learned from skiing to get myself to the point of owning it.

Why do you say yes to those types of experiences?

I’m always so relieved that I did it, and I think the more power to you if you try something that scares you or intimidates you or pushes you out of your comfort zone and you get through it. I would regret it if I said no, and then I’d be bummed because I might never get that chance again. And that’s how I am—not every decision is great and I might walk away thinking, “I don’t know if that was worth it,” but nonetheless, it’s getting me out of my comfort zone and my routine, and I like that.

Have you given the Ski and Snowboard Hall of Fame any thought?

Yes and no. That would be an honor, of course, but it’s up to others to decide. I still look at the Powder magazine cover that I’m on with Sarah Burke, Mike Douglas, Glen Plake, Wayne Wong and JP Auclair, some of the top skiers in the world, and I think, wow, I’m really proud that I was mentioned among those people. If I get more milestones like that that’s awesome, but I can’t live my life waiting for that moment or wondering if I’m worthy.