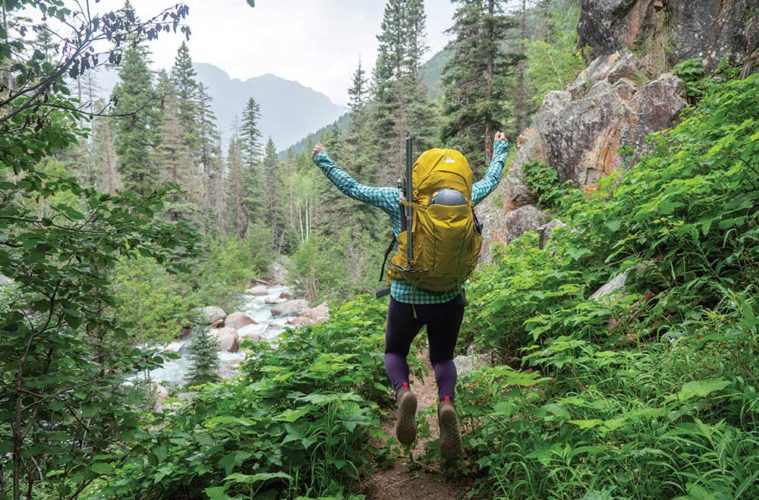 Moving from the streets of New York City to the fourteeners of Chicago Basin, one woman found transformation in the wild. Here’s how she plans to help girls discover the power of the outdoors.

I am the youngest of three sisters. For my whole life, I’ve watched my two older sisters test new hobbies, get caught, succeed and forge paths. From the safe and guarded wings, I’ve taken notes, applied what I wanted, avoided what didn’t work, and borrowed every article of clothing they would allow me to. The fake ID a few years early wasn’t half bad either.

Six years ago, when I traded sky scrapers for mountains by moving from New York City to Colorado, I was following my middle sister—keeping her sage advice close by. When I arrived in Colorado, a grown-up playground unfolded in front of me. Highways followed rivers into the mountains instead of cutting through them. Valleys opened up with steep craggy peaks towering above them whispering, “Maybe you could climb up.” Late New York City nights succumbed to twilight alarms to fight I-70 traffic and continue the exploration. Here was an activity that neither sister was interested in. I had to make my own mistakes and figure out my own routes. How do I go about buying an ice axe?

Alongside new hikes and climbs, I found an intense appreciation for the land. I’ve always skipped hair-washing days and carried a reusable water bottle, but this landscape compelled me to go farther into zero-waste life. Toothpaste pellets replaced plastic tubes, personal glass containers served as take-out boxes, the bulk section became my new best friend—I went in for the whole nine yards (all compostable material, of course). My entire family adopted this ethic: All three sisters (and Mom) are working toward making the smallest impact on the world as possible.

I currently live in a van full-time and I grapple with my reliance on fossil fuels as a means for transportation. I use very little water, rely on solar for power, and have changed a lot of my lifestyle to shrink my carbon footprint. Though I still drive—how else to catch the aspens turning on Kenosha Pass?—I purchase carbon credits to offset my mileage, but there’s always that push and pull between doing the “green” thing, and doing the convenient thing.

After six years of exploring nature and knowing I needed to do something more, but lost as to how to contribute, I found The Cairn Project. It’s an organization that works to expand outdoor access for women and young girls. The founders use donations to support community-based wilderness and outdoor education groups around the country. With exposure to the outdoors comes respect, and with respect comes the responsibility to protect. By working with the Cairn Project, I would be helping get young girls out into the wilderness to spark the same flame that blazes in me. And I hoped it would engender the same need to protect these lands. 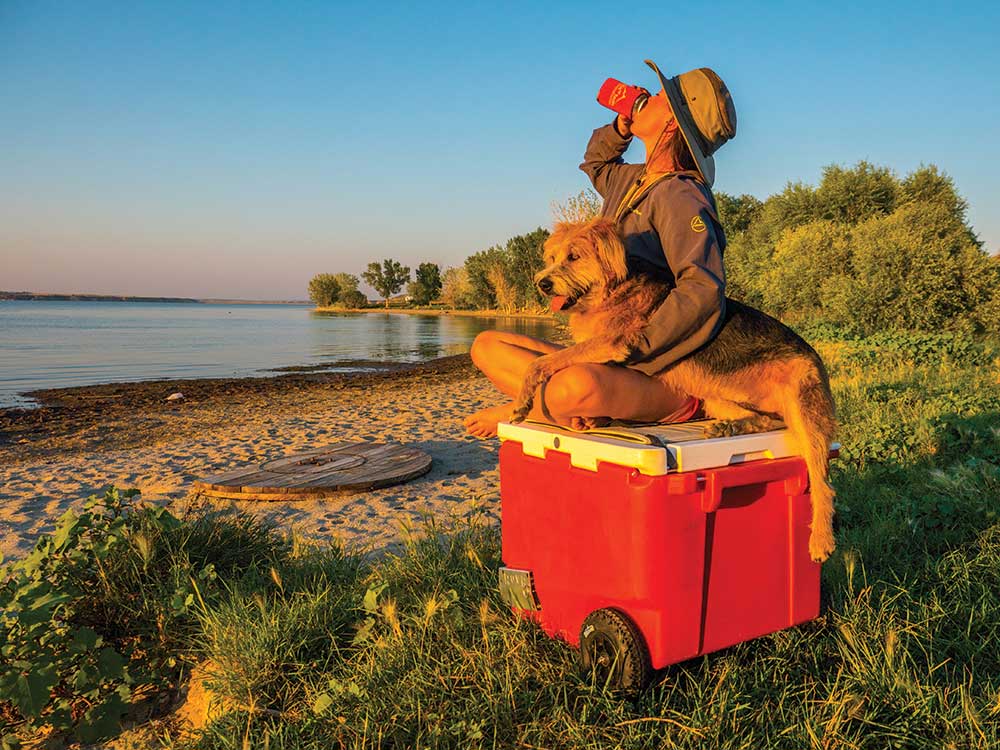 Always on the Road –
Working on the Elevation Outdoors live outside and play team, Harbitter and partner Ben Dawson live a low-impact life in a van, stopping to spread good vibes (and hand out magazines) along the way. / Photo by Ben Dawson

The way The Cairn Project works is you pick an outdoor project such as a thru-hike or bikepacking trip and fundraise donations to complete the project. I picked The Three Sisters Trail in Southern Oregon, which winds for 50 miles around three closely spaced volcanic peaks, all part of the Cascade Volcanic Arc and all over 10,000 feet. My plan is to backpack around the three mountains on September 16, completing the longest trip I’ve done to date. I am even more inspired for it because my project will celebrate my two older sisters, aid the next generation in protecting our only planet, and allow me to explore lands I knew nothing about. In August, in Colorado’s Chicago Basin, I started to train for my trip.

Chicago Basin is a hot spot for environmental concern and conservation. One of the fastest ways to access the basin is by coal-powered train. I know—raise a red flag for traveling by a vehicle that pumps more carbon into the atmosphere. But I’d buy more carbon offsets, and the train’s history is intrinsically linked with the Basin.

Last year, while traveling from Durango to Silverton, a cinder blew from the train’s smokestack and ignited the 416 fire. The extreme drought conditions of last summer caused the conflagration to spread rapidly, and eventually become the sixth largest fire in Colorado history. A lawsuit filed by the U.S. Attorney’s Office on behalf of the U.S. Forest Service for the District of Colorado is set for trial in September 2020. The lawsuit has divided the town—the train brings in millions of tourism dollars yearly, yet it caused massive destruction.

The controversy fades away when you step on the train. A joyous conductor takes your bag and escorts you to the correct car. Images of horses clopping down the street and hoop skirts swooshing the coal-dust-covered road flash by in my imagination as the train slowly chugs towards the mountains. This is an experience for the tourists—the backpacking trailhead along the way is an added bonus. The hike into Chicago Basin covers almost seven miles and 3,000 feet of elevation gain. About a half-mile into the journey, you come along the Wilderness Boundary sign. This is where you usually pick up a few human waste disposal bags, tucked in a bin attached to the sign, for the trip.

Human waste is a huge issue in the Chicago Basin. At high elevations, there isn’t the right bacteria to break the fecal matter down. At lower elevations, if waste isn’t buried deep enough, animals will dig it back up. If it is too close to water, it will seep into the streams.

The U.S. Forest Service and the San Juan Mountains Association have initiated a program that encourages visitors to use a human waste containment bag. There are usually bags available for pick up at the entrance to the wilderness area, but according to Devin Wanner with the U.S. Forest Service, the officer in charge of stocking it has since retired and hikers have been using it as a trash receptacle.

Luckily my partner Ben and I had a shovel with us to bury waste at least six inches deep. It would have been more responsible to bring in our own waste receptacles and not rely on them being at the trailhead. Hindsight. With enough thought put to poop, it was time to start hiking.

Hip straps clipped, shoulders aching, I drug myself up Needle Creek Trail. Here’s a surprise: I am a huge wimp when it comes to carrying bags loaded with gear up steep pitches over rocky ground. One of the reasons I chose a backpacking trip for The Cairn Project was because I knew I’d be out of my comfort zone.

How am I going to do this for 50 miles on The Three Sisters? I’m three miles in and I might pitch my tent right here. The multitude of thoughts that pass through my brain while hiking is like a full fledged therapy session. I always thought if I said any of the things I thought out loud, I wouldn’t have any hiking partners. I can’t do this, so many things hurt, are we there yet, I don’t care about that mountain goat. But when you’re walking, you’re rebelling against the use of fossil fuel. You’re using your body to travel. I chug on.

Eventually, the aspens gave way to a sloping basin protected by an intimidating skyline of ragged peaks. With a break from my constricted breath, I was able to see the beauty of the landscape around me: Waterfalls poured down from mountain passes in the distance and wildflowers taller than me lined the way to my campsite. A family of goats shared the sunset views with me.

After two 3 a.m. wake ups, and constant inner battling, I made it up three fourteeners and hiked my body out of the basin. On the way out, I stumbled on what I thought was garbage. I picked it up and continued on my way, but the smell from the garbage made me re-think what I had done. Turns out what I thought was un-eaten backcountry meals was actually poop in packages. Whatever. I still packed it out.

Back at the trailhead, I was exhausted. I had summited three mountains and carried considerable weight up and down thousands of feet. I felt more prepared for my ultimate goal, The Three Sisters. And here’s a bonus: In prepping to climb them, I compounded my offering to The Cairn Project, by educating myself (as I’m now educating you) about some of the impacts we humans have on the wilderness. 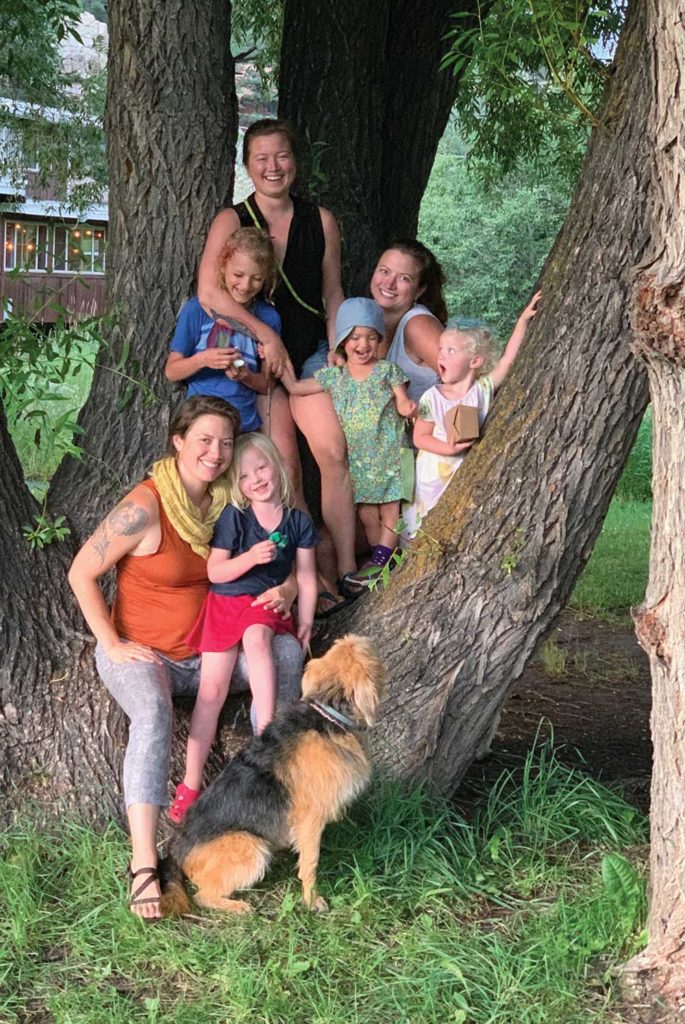 The youngest of three girls, Roxy (middle) chose to backpack the three sisters trail in oregon to celebrate her siblings and the hopes of the next generation. / Photo by Lisa Jan

And when I do head to The Three Sisters this month, I’ll be bringing all the versions of myself: The littlest sister, New Yorker, Colorado transplant, environmentalist, backpacking and mountain climbing me will complete those fifty miles. And I’ll bring the wonder and respect of the great outdoors with me the whole way, to share with that next generation of adventurers.

Roxy Harbitter is one of the two-person Live Outside and Play Road Team for Elevation Outdoors and Blue Ridge Outdoors magazines. She has been living full-time in a van for three years—working, exploring, creating content and trying to live as gently on the earth as possible.