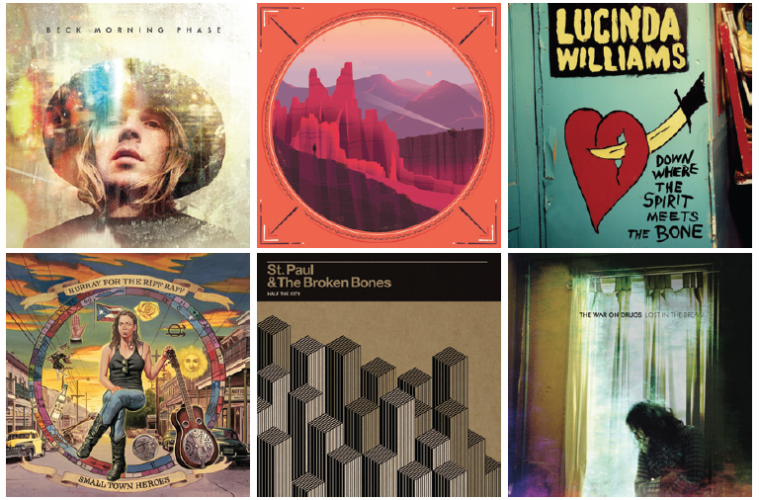 The latest effort from Mark Kozelek smacks you in the face with it. Through mesmerizing minimalist arrangements, the longstanding alt-folk tunesmith finger-picks his way through startlingly candid personal revelations. At times the album feels like a talking-blues brain dump, as Kozelek unloads details on everything from freak accidents that resulted in family deaths to first sexual experiences to hanging backstage at a Postal Service show. While tragically beautiful, Benji can be a tough listen, since it never stops reminding you how fragile life is.

Down Where The Spirit Meets The Bone

Lucinda Williams is getting more prolific with age. Now 61, the country-rock songstress recently unveiled her first double album. It’s a deep, 20-track set that revels in hip-shaking Memphis soul while also offering plenty of the open-hearted emotional moments that only she can deliver. The best? The stark, a raw opener “Compassion” that she composed from a poem written by her father.

The War on Drugs

Lost in the Dream

In the studio, The War on Drugs is largely a solo quest for sonic fulfillment by front man Adam Granduciel. On Lost in the Dream he wanders into a wilderness of guitar layers and airy synths, all while keeping the root of his songs grounded in honest folk-rock. The album floats along with a dreamy groove, electronic swirls made exciting by steady dance beats, often drifting into ‘80s-style indulgences (“An Ocean in Between the Waves”) yet never forgetting its Americana heartbeat (“Eyes to the Wind”).

Hurray for the Riff Raff

Alynda Lee Segarra has a unique American story. She’s a banjo-toting singer-songwriter of Puerto Rican descent who grew up in the Bronx and left home as a teenager to hop freight trains and sing as a street bisker. She eventually settled in New Orleans and the latest album from her folk outfit is largely a love letter to that city. The group deftly moves along the Americana spectrum, blending elements of blues, vintage country and string-band jazz. With her powerfully sultry voice, Segarra sings about friends in the Lower Ninth Ward while pushed by a Cajun shuffle in “End of the Line.” She also doesn’t shy away from the political, crafting a fresh take on the murder ballad to lament violence against women in “The Body Electric.”

With Morning Phase, Beck is back in the mode of somber simplicity that defined his 2002 release Sea Change. It’s a mood that once again sends him to the territory of Laurel Canyon-style acoustic rock, taking listeners on a meditative journey. This is by no means Beck’s most daring record, but the soothing quality of standout tracks like “Blue Moon” is infectious. The mellow setting is often enhanced by lush arrangements from Beck’s father David Campbell, who adds tasteful flourishes of piano, pedal steel and orchestral strings.

St. Paul and the Broken Bones

Half the City delivers a soulful trip back to the heyday of Muscle Shoals—in-the-pocket R&B grooves and complementary horn blasts. It’s led by the big voice of Paul Janeway, an authentic husky-piped singer who grew up immersed in gospel in Alabama. His roots run deep, He possesses the swagger to sweat through the relaxed lovesick cool of Sam Cooke (“I’m Torn Up”) and the deep funky emotion of James Brown (“Like a Mighty River”).

Justin Vernon’s old band mate stepped it up when crafting this sophomore release. Chris Porterfield comes off as a rough, blue-collar dude with a poetic interior, and on Marigolden he ponders booze demons and rigors of the road through an enhanced sonic palette that mingles acoustic guitars with dark piano accents and well-placed electronic backdrops. “Home (Leave the Lights On)” is the catchy gem that will definitely stick in your head, even if the lyrics are reflecting on personal damage: “The body remembers what the mind forgets/Archives every heartbreak and cigarette.” •