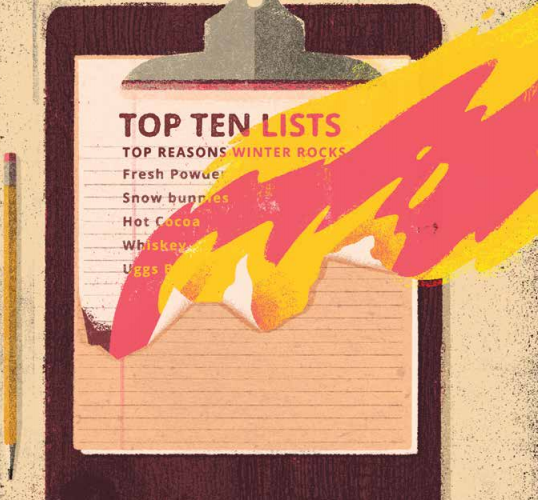 The explosion of Facebook and Twitter, the constant warts-and-all exposure of reality TV and, especially, the endless op-ed outrage of Fox News have all but destroyed the last vestiges of what used to be known as journalism. And so a particularly toxic new form of “news” has emerged. Yep, it’s The Top 10 List. You know, that must-read ranking where everything from mountain towns to ski runs to pizzerias to brewpubs to washed up child stars to best James Bond chase scenes can be neatly arranged and ordered according to some obscure blend of alchemy, observation and sometimes—though not often—reader-generated votes.

There have been more than a few Top Five, Top Eight or Top 10 lists penned in this very column, including Top Western Movies, Top Reasons Winter Rocks, and one of this writer’s all-time favorites: “It’s Ruined: Ten Things that were Cool about Colorado … Until You Got Here.” And I’ll bet a sack of tacos the majority of you read some sort of top something or other list already this week. I bet you were doubling up, halfway through said list, shaking your head

Why? Because for the most part, Top 10 Lists suck. They’re lazy, contain almost no real information and are usually forgotten the moment you finish reading them. In that spirit, here are Elwayville’s Top 10 Reasons Why Top 10 Lists Suck:

#1. The author has absolutely no idea what he/she is talking about. I recently saw a list of top Colorado ski towns. When I cyber-stalked the author, I found out he lived in Chicago. So, I’m thinking he might not be my best source for slopeside know-how. Anytime you see some write-up touting Longmont as a vacation Mecca or extolling the Commerce City nightlife, you know it’s a bum list.

#2. Top 10 Lists involve NO science. These are all opinion pieces. There’s no mathematical formula or head-to-head bracket to determine who grows the best weed, grills the juiciest cheeseburge, or has the most hair-raising steep slopes. Unless someone were to devise a thoroughly taste-tested best pizza championship. I’d sign up to judge that.

#3. If there is any “criteria,” it’s almost certainly something you don’t care about. Like how many lifts the top ski area has (you’ll only ride two or three of the good ones anyway), or how many locals moved there after first visiting as tourists (I’m guessing that would be everyone who wasn’t born there, right?).

#4. The author DOES NOT name your favorite brewpub, pizzeria or ski slope. And thus, has no idea what he/she is talking about.

#5. The author DOES name your favorite brewpub, pizzeria or ski slope. And the next time you go, it’s twice as packed.

#6. Every Top Ten List would always be better as a Top Five List. That’s because the first five are usually so much better than the next five. But then the list would only suck half as much.

#7. Because Moses (or somebody) wrote the world’s first—and best—Top 10 List (with more than a little divine intervention and stone tablets, of course), and God knows we still haven’t figured out a way to stay true to that. Then David Letterman followed that act up with comedy’s nightly version of the Ten Commandments, TV’s best recurring shtick. (We probably should’ve stopped while we were on top.)

#8. Because by #8 the narrative begins to wander, walking out onto the porch to see the way the December sun is setting through the trees, calling a friend to talk about skiing tomorrow, and looking for that last little bit of inspiration to bring it all home. That, or our Internet-infused ADD encourages us to forget what we were reading. Wait, what were we talking about?

#9. One of these lists might actually change your life. Spend enough time on the Interwebs, daydreaming about some “10 Most Affordable Mountain Communities,” “Still Undiscovered Ski Areas,” or  “Singles-Dog-MTB-Caffeine-Bluegrass-Friendly Places” and you might actually be convinced to take the leap. We’ve all seen those pictures of shimmering lakes, untouched powder playgrounds, and wood-stove cabins with nothing but deer for neighbors, which start to convince even the most committed Coloradoan that it might be time to forgo the I-70 traffic. You could do worse than that.

#10. Because for every Top 10 List you actually take the time to read, that’s ten moments of your life you’re never going to get back.

—Elevation Outdoors editor-at-large Peter Kray is the author of The God of Skiing. The book has been called “the greatest ski novel of all time.” Don’t believe the hype? You can buy it here: bit.ly/godofskiing