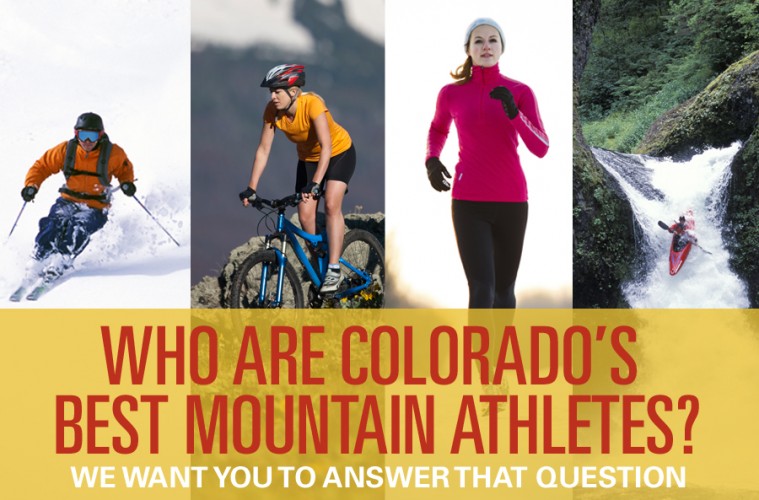 We Want You to Crown the Top Colorado Mountain Athlete

Voting is closed as we determine the first round of winners!

We will feature the top vote getters (overall, man and woman) in the January-Febraury 2015 issue of Elevation Outdoors magazine! Then, you will vote again out of that group for the one and only Colorado’s Best Mountain Athlete.

We scoured the hills, rivers and trails and picked the brains of all our experts, and have narrowed down this extremely competitive field for you to vote. Just click on your favorite athlete in each category, click Vote, and you’ll see who is leading the polls at that moment. Rally your friends and vote every day (one vote per day)! We’ll feature the winners in our January-February issue. The first round of voting ends Dec. 10 at 5 p.m. EST!

Colorado has more than its fair share of outdoor athletes who push the idea of what’s possible. They shine on every stage from the Olympics to YouTube videos. But who rises above the pack? Who are Colorado’s Best Mountain Athletes? We want you, dear readers, to answer that question. We narrowed the choices down to the three best male and three best athletes by discipline in the state. We put men and women together. You vote to determine the winners. We will feature the top vote getters (overall, man and woman) in the January-Febraury 2015 issue of Elevation Outdoors magazine and vote again out of that group for Colorado’s Best Mountain Athlete.

Vote for your favorite athlete (one vote per 24 hours) in each category, then check out the January-Feburary print issue of EO to see the winners and vote for the single Best Colorado Mountain Athlete.