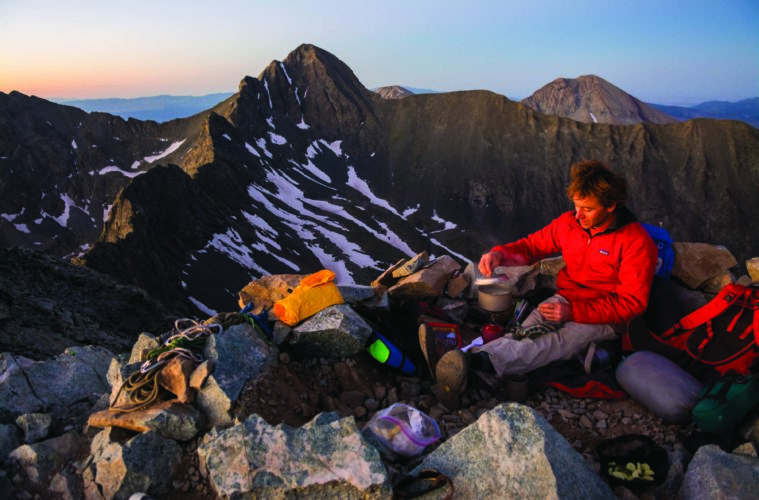 The Slowest Are First

What’s the best way to escape the crowds and find some type of new, authentic experience on Colorado’s over-loved Fourteeners? Spend the night on top and bring a kite.

It’s a long trudge up the 4×4 track to Lake Como—especially in the blazing afternoon sun. Rising 4,000 feet in seven miles, the road is labeled the “roughest in Colorado” and a memorial plaque at the Jaws II crux section serves a testament to the ambition of some four wheelers. “Kind of seems like soloing (climbing rope-less) with a lead weight attached,” my partner Allen observed. From our alien-like encounters passing several jeeps—us gawking, them rocking—it was clear that neither party really understood the point of our respective adventure objectives.

The weather remained perfect into the afternoon as we headed up the 1,400-foot West Ridge Direct route we had chosen for our ascent of Little Bear. The warm setting sun, mostly good rock, and the fact that we had no rope kept us rooted happily in the moment until the route abruptly ended at the slender summit—a conjunction of three lengthy ridges providing little more than a tattered summit register and shallow rock depressions for shelter. It looked like home to me.

Holding a kite in one hand, I teetered along the rocky ridgeline descending from 14,035-foot Little Bear Peak while Allen unrolled a slender spool string attached to our magical toy. Together we counted, “one, two, three,” and I tossed while he pulled. With no room to run, the kite started to fall over the edge. If you want to sleep on top of a 14er so you can beat the crowds to one of the most precipitous and popular traverses in Colorado, you need to bring a kite, right?

Summiting a 14er should be a top priority, a rite of passage for Coloradans (and an increasing number of visitors). Part of the appeal is that there are so many of them and so many ways to enjoy them. While California’s 14,505-foot Mount Whitney is the highest in the lower 48 States, its permit system can be a challenge. Washington’s 14,411-foot Mount Rainier, which has the greatest prominence, or vertical rise, is logistically difficult to climb, with countless crevasses and weeklong rainstorms. Colorado’s 14ers, on the other hand, offer everything from the ability to drive to the top to technical climbing on exposed rock, and they benefit from generally sunny weather and moderate, glacier-free approaches.

The only problem is that accessibility makes them popular: Visit the Longs Peak Trailhead in summer at 3:00 a.m. and you will see more headlamps than a field of fireflies, and on the summit you will fight off a horde of fat marmots queuing for your lunch. You won’t be alone or the fastest or the first. But this popularity can easily be avoided by embracing the individual freedom and creativity that are the foundations of mountain exploration, by climbing them with personal style.

Harken back to your grade-school PE class. The teacher, most likely sporting white-striped Adidas pants and a whistle, is herding everyone onto the track, bellowing, “Run, everybody, run!” The class spreads out around the oval, most barely trotting, except for the fast kids who invariably lap everyone. There’s a moment, when you first hear the fast kids’ pounding feet coming up to pass, that you have a stylistic choice. You can accept the indignity of being really slow, or you might pretend that you are actually in front, racing to the finish line neck-in-neck. If someone took a photograph of this moment, it would corroborate the fantasy. It turns out that being last can sometimes mean being in front. 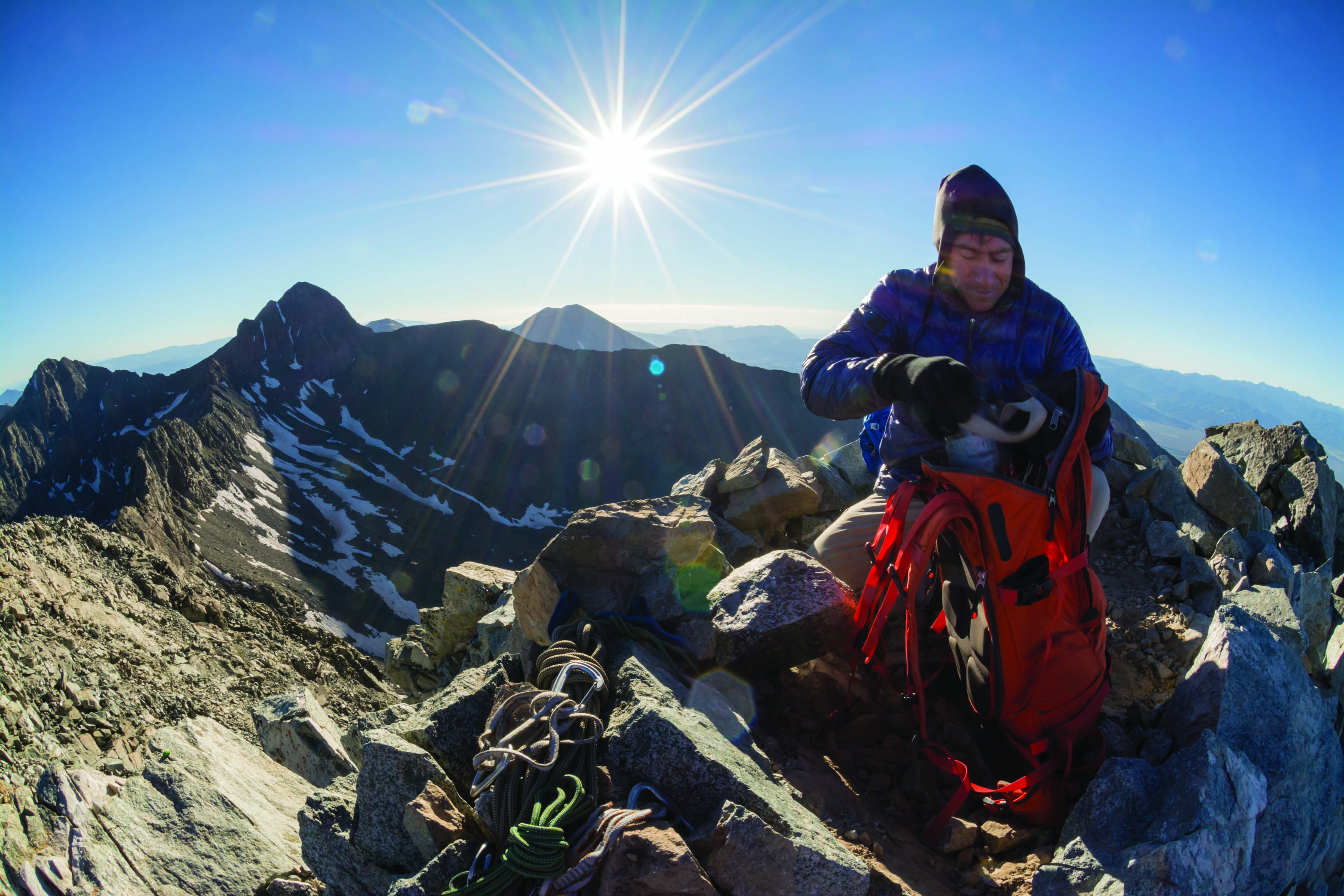 At least that was my argument to Allen Riling, a frequent climbing partner from Durango, as I explained the idea of a minimalist, nighttime summit-bivi on Little Bear, the second most difficult 14er, jutting steeply above the eastern edge of the windswept San Luis Valley. My plan for the peak was unusual in that it went against the cardinal rule for climbing any 14er in the summer: Start early with a headlamp and descend by noon to avoid the frequent and violent electrical storms. I wanted to be last.

“Nowhere does this rule include summit bivvy,” Allen replied skeptically.

“We’ll reduce the hazard of climbing below other people and potentially knocking rocks down by starting really late and sleeping on top,” I argued. “We can assess the thunderstorm potential at noon before even leaving the car, and then again at 4:00 before we climb above treeline.”

Allen still looked unimpressed. He and his wife were expecting their first child soon, so I understood why he was questioning my wacky idea.

“With a liter of wine, a stove and light sleeping kit,” I pressed, “our packs will be tiny compared to the awesome sunset over the plains over 6,000 feet below.”

I sold him on it. Our style was set.

While our plan was unusual it is not unique. In 2011, Jon Kedrowski slept on 54 summits in 95 days, publishing a book with meteorologist Chris Tomer called Sleeping on the Summits. Camped on Mount Harvard, Kerdrowski got chased from his tent by a rogue thunderstorm. He remembers being guided by an angel-like figure sitting on a rock pointing where to go. Moments later, lightning struck the tent, knocking him down and melting the poles and the contents within it.

The difficulty of Little Bear was another draw. Its summit is the stepping-off point for Colorado’s most precipitous ridgeline, the Little Bear-Blanca Traverse. A serpentine “walkway” of towers, pinnacles and rock dropping exposure, this mile-long crest resembles the Great Wall of China—with slightly different proportions. It’s just two feet wide and 1,000 feet high. There are no easy escape points so bad weather is a real concern, making an extra early start key.

Although last to summit, we were now first in line for the traverse. Those shallow rock depressions insulated us from the jaw-dropping exposure while our camp stove labored in the thin air to boil water for a pasta supper. We felt cozy yet  giddy from the altitude.  As the sun crept towards the horizon, we wished we were in summertime Alaska so the day would last forever.

Our evening was thankfully free of any weather-related pyrotechnics and after a leisurely breakfast we were well along the actual traverse before the first “fast kids” rolled over the summit of Little Bear and joined into the delicate choreography of climbing along the narrow path to Blanca.

After a couple of hours of focused, precipitous, beautiful movement, Allen and I reached the summit of Blanca Peak, pausing for a moment before beginning the long, knee-tweaking descent back to our car. Looking back over our sinuous pathway from Little Bear, still hours before noon with no need to rush, Allen recalled  the moment from the previous day when we had the summit of Little Bear and the evening all to ourselves and he unfurled his stunt kite and we tried to launch it. 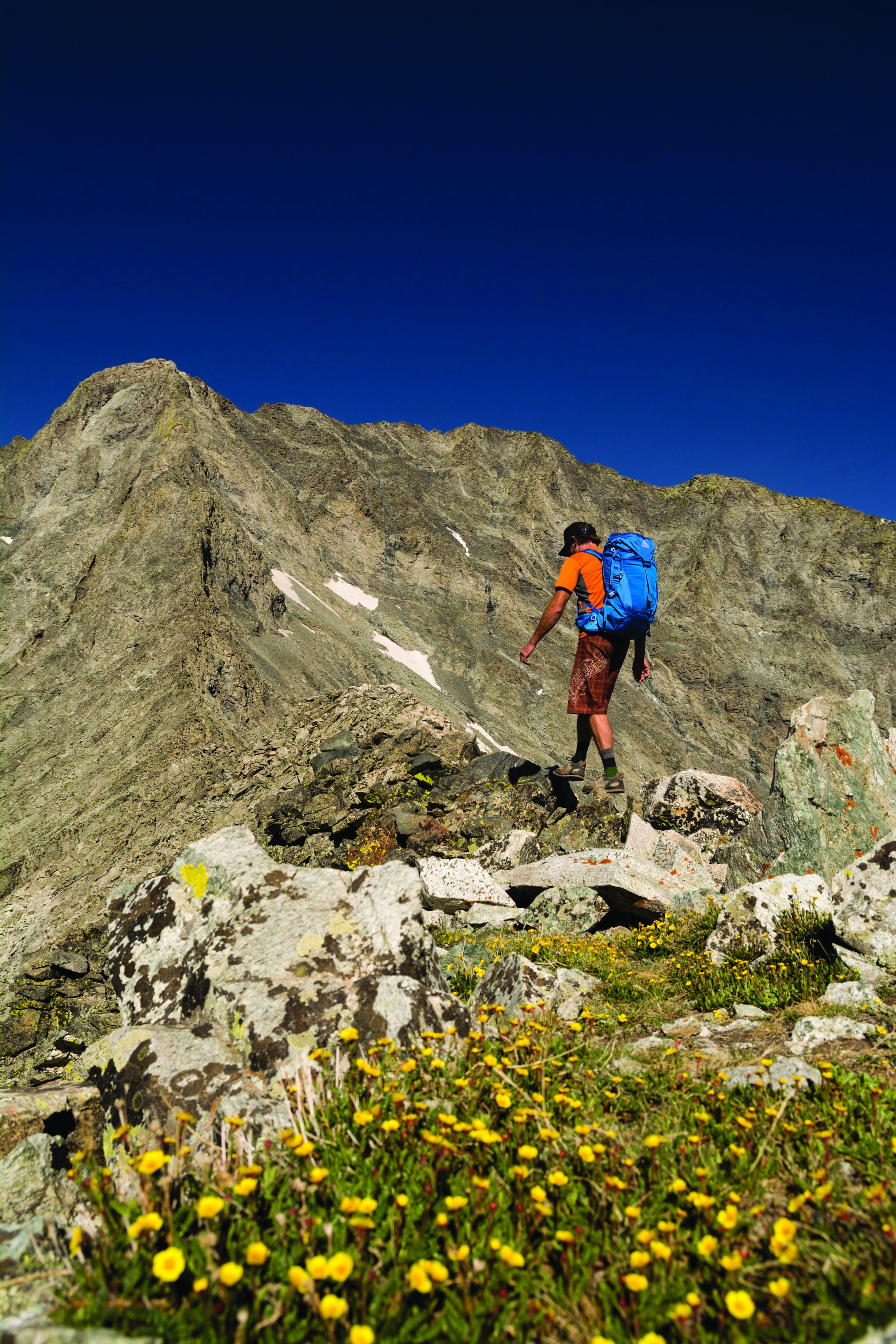 At first, we failed to properly align with the wind. The kite faltered and tumbled. Then, like a fish on a hook, it shot up, suddenly high overhead, glistening and rippling in the golden evening light. It was a moment we wouldn’t have had time for had we been hurrying our way around the 14er PE track, so to speak. Holding the strings like reins to a horse, the fabric of our wind-filled fancy danced above us. It was a mythological white-winged Pegasus, free and unrestricted by our earthbound perch. Amid the lengthy list of 14er firsts, summit kite at sunset is surely the next big thing—at least for anyone who wants to sleep in for the noon-time departure.