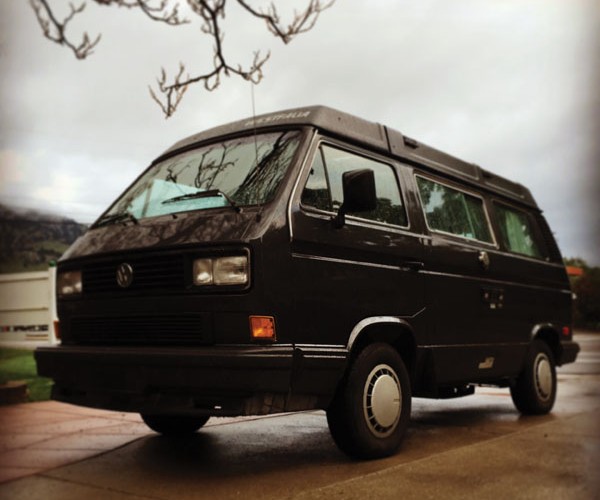 The Road to Taos

Escaping winter and seeking warm refuges down south is a priority of mine when winter lingers into spring on the Front Range. I go on my way, in sandals. And as that iconic roadtripper, Dennis Hopper, once said, “There is destiny in Taos.” An Easy Rider fan myself and having been to Taos several times during winter months, I never understood the allure, maybe the blizzards covered the shambhala. So there was only one thing to do, when winter came in May to Boulder. I would have to go back to find Mr. Hopper’s destiny—and I would have to do it in the appropriate style.

Friends had turned me on to Rocky Mountain Camper Vans in Golden. Started by a couple who had recently embarked on a vanagon venture of their own, the outfit rents out newly vintage and fully vintage Volkswagen vans. But this is no Easy Rider throwback—RMCV fully kits these babies out. This is true easy riding with everything included: stove, fridge, pots, pans, silverwear, headlamps, cutting boards, camp chairs, even fresh linens for the beds, yes, plural. All you need to do is hit the quickie mart for some essentials and off you go.

Boyd, one of the owners, gave me a quick run-thorugh of the intricacies of my chosen battleship before I hit the open road. He explained that each Volkswagen truly has a mind of its own

Soon, I plugged my iPhone into the shiny new radio, streamed a classic rendition of “Franklin’s Tower” and set off in an unnamed 1988 Volkswagen Vanagon Westfalia edition. After rigging up some tacky LED Christmas lights and plugging them into the inverter, I picked up my co-pilot/girlfriend, her unsuspecting friend visiting from Philly and my trusty pointer Loosa. We left the Front Range behind and I let the steamship gradually reach cruising speed. Boyd had advised I take it easy on the brand-new 90-horsepower engine, a transplant that was only 500 miles into it’s break-in period. He also reminded me to embrace the journey, and to accept that 60 miles per hour is a decent goal but that I would need to “feel it out.” “You’ll find your speed,” he had assured me.

As we climbed from mile-high elevation to 7,000 feet to almost 10,000 feet as we neared Fairplay, Colorado, I began to understand what Boyd meant by “feel it out” in terms of speed. My best guess was, find another Westy (common nickname for the Westfalia), and follow it. Which is pretty easy if you’re cruising along back roads in the West. I also found a new respect for orienting a fifteen foot bus in Colorado during Rocky Mountain monsoon season, which equated to rain, sleet, snow, hail and gusts that had even blown a semi-truck off the road. My mantra was go slow, no quick corrections and let the steering wheel float in your hands.

It was at this point on the journey, as we made our way south on RT 159 passing by the Sangre de Cristo Ranches and Culebra Peak, that I swear Peter Fonda and Dennis Hopper came into view in the Westy’s enlarged rear view mirror. Harleys, Triumphs, three-wheel chromed-out machines the roar of V-Twin engines and leather passed by us. They were out in clubs and adorned on their backs were patches: Sons of Silence, Vagos, Bandidos.

Then I noticed that our fuel level was bordering on low. As we crossed the New Mexico border into the town of Garcia, a single gas station came into sight (the only one in town). I let the bus coast in. In no time, we were surrounded by the motorcycle clubs, eyeing us as if we were hippies stright out of 1969. (I’m positive I heard Jimi Hendrix’s “If 6 Was 9” bellow from a chopper’s speakers.) To my left, a group was passing around a fifth of Jack, and to my right was a tattooed couple with matching leather vests adjusting their tattered leather chaps before they hit the pavement. The only thing missing was our tie dye. We descended into Taos and past its pueblo with these outlaw riders swarming around us. We quickly learned that the Red River Motorcycle Rally had taken over Taos and pretty much all the blacktop in the surrounding area this weekend.Motorcycles be damned, we were on the hunt for the ultimate mole and cervezas. Eating establishments with a long wait usually cause the New York blood within me to boil. Not so when you’re traveling in a Westy. The party is always inside.

We met up with some long-lost friends on a roadtrip of their own in a parking lot we uncorked a few bottles of wine, popped the camper top and turned the front seats around and bam! in an instant, our steed became our living room. Forty-five minute wait? Bring it on. Thankfully, takeout from the Love Apple of Taos did not disappoint. In fact, I still have a jar of their famous mole in my freezer.

Surrounded by national forests and BLM land, we made our way towards the Ski Valley, in search of a place to pop the camper top for the night. Nestled alongside the Rio Hondo, we curled up in the double bed belowwith the pup, while our friend got the penthouse up top all to herself. At dawn, we broke camp in just minutes and set our sights on devouring breakfast at the Taos Diner. The famed breakfast burritos with Christmas sauce awaited us.

The rest of the weekend lived up to what we had hoped for: We had escaped rain and snow up in the Front Range to embrace wanderings on the backroads of northern New Mexico. Spring in the Southwest is surely something to be one with, whether you’re behind the wheel of a vintage Volkswagen bus or sharing the backseat with a hitchhiker, who identified himself as a New Age practitioner (I admit, it was my idea to pick him up). The sweet scent of piñon and sagebrush filled the air. We hiked the banks of the Rio Grande gorge and visited friends on Michael Reynolds Earthship Ranch. We soaked our bones in the Ojo Caliente Mineral Springs. We took it slow heading back home and stopped in Salida, Colorado, to ride some singletrack and grab pizza.

Renting a Volkswagen bus made us part of a gang of our own. Fellow vanagons would give us “Westy Wave,” and when we pulled into a gas station we were instant superstars. I’m going to miss hanging out in the right lane and so many of the other fun times we had with Frankie, the name we christened our Vanagon. And wherever he is, I know his current passengers are enjoying their own destiny.

—Joseph Risi recently became race director for the COSMIC series (Colorado Ski Mountaineering Series) where he can be seen organizing skimo races throughout the west to make skiers suffer uphill and down.