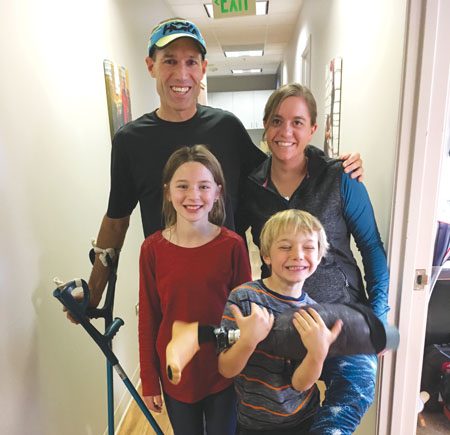 Dave Mackey is one of the most accomplished ultra runners in America: He’s won numerous USATF trail running championships and set the course record at the Miwok 100 (which he won three times), as well as set the fastest round trip up and down Boulder’s Third Flatiron. But those accomplishments pale in comparison to Mackey’s most recent challenge. In May 2015, Mackey, 45, was running down Boulder’s Bear Peak when he stepped on a loose rock and tumbled more than 20 feet. A 250-pound rock came trundling after him, crushing his leg and shattering his tibia and fibula. After months of surgeries and the likelihood of lifelong pain and limited mobility, Mackey made a decision that will allow him to walk, run, ski and be an active father: He had the leg amputated. We caught up with Mackey to discuss his decision and how he’s doing after surgery while he waits to get his prosthesis.

When the accident happened, did you have an idea of how severe the injury was going to be, or was it a surprise?

The rock was on my leg for about five or seven minutes and it hurt like hell, but I didn’t know how badly I was hurt. When [rescuer] Paul got the rock off with a big stick, I wasn’t too astounded that I had an open fracture. The biggest surprise of all was when I survived the fall itself through dozens of sharp boulders and landed on a small patch of sloping gravel before another drop off. I am lucky that my leg injury was the only serious one I sustained!

What was the deciding factor that made you want to undergo the amputation surgery and not keep the leg?

The decision to amputate my leg was multifold, but it basically came down to the fact that the tibia bone grafting to replace the fracture site had failed. To re-graft the site would involve a lot more recovery time, up to a year. I still had residual infection in the leg, and with that infection present, the grafting would not work. That’s why it didn’t work in the first place. I also had a carbon fiber rod nail, which is a long rod through the tibia, which was moving around and would need to be re-situated. All in all, even if the graft worked and the nail was set, the likelihood of limited mobility and pain with mobility would be a constant issue for the rest of my life. Amputation was the logical, albeit less than desirable, choice. It was by far the most difficult choice of my life so far, but I am happy with the outcome now.

What are some of the best things you learned during this process? has this injury given you any new perspectives?

Absolutely. It sounds cliché, but I feel fortunate to simply be alive. For many months after the accident, I felt somewhat like a ghost walking through the world, like I should be dead but wasn’t. Being alive feels so good. Now that I will live a normal life, I appreciate the simple things even more, like walking, having a functioning brain, and, most of all, my family and friends.

Who are some of the people that have supported you throughout this journey?

My wife Ellen has taken on a big burden for me and our family for much of the past year and a half. I have had to work a lot more as well and travel for much of my work, so she has been there 100 percent for us. Many, many good friends have come forward to help me as well with meals, walks, medical advice and just time spent together. My kids, too, have been flexible throughout the whole experience.

There have been some amputees such as Amy Palmiero, Malcolm Daly and Emily Harvey—all incredible people who are below the knee amputees—who have been inspiring role models. So yes, given what they have done, including Ironman triathlons, ice climbing, 135-mile ultrarunning races, and more, I should be able to attempt a couple of those things! I do plan on skiing this winter, too, both tele and randonee and skate skiing.

What would be your advice for any athlete trying to recover from a major injury?

To be honest, my injury is mild compared to what it could have been, and others have much more difficult situations from trauma injuries. The best mental aspect to undertake is positivity in any hard situation. Much like any long race or getting through a difficult graduate school program or medical school, you just need to take it test by test, tree by tree, aid station by aid station. You have to make sure you don’t get overwhelmed by the whole situation all at once.