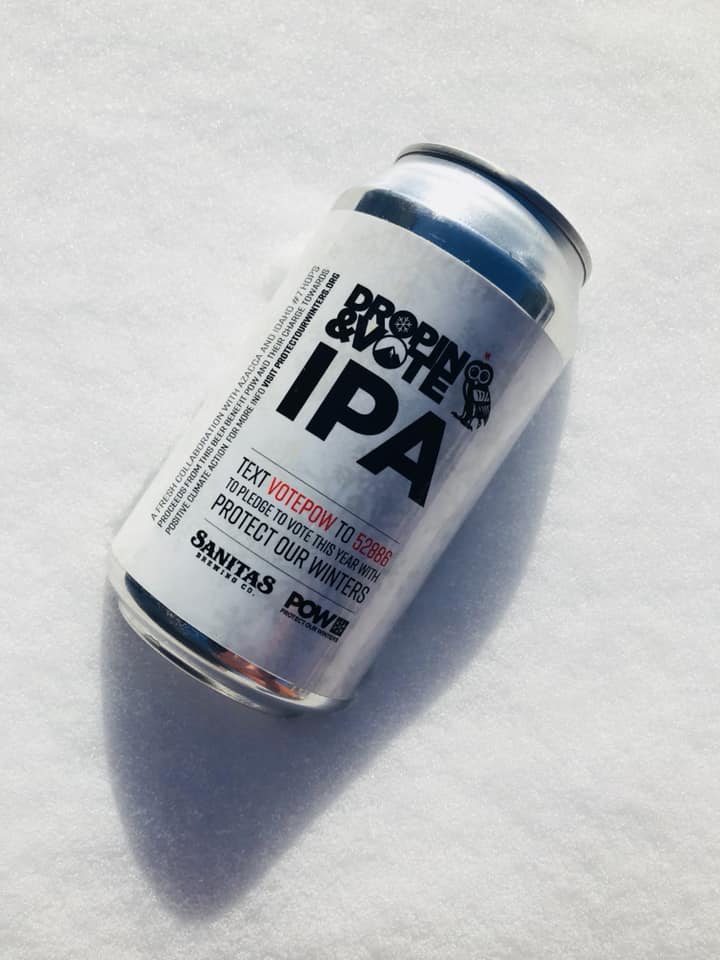 Sanitas Brewing Co. Teams Up With Protect Our Winters to Launch a Beer for Climate Change

If you’re looking for a new beer to add to the ol’ après cooler this season, Sanitas Brewing Company has the beer for you. The Boulder-based brewery teamed up with Protect Our Winters (POW) to release Drop In & Vote IPA — an easy drinking session IPA brewed to help the organization dedicated to climate advocacy raise funds for the cause.

“I’ve been a big fan of POW and what they do for years,” said Michael Memsic, co-owner of Sanitas Brewing Co. “We wanted this collaboration to be focused on the election. POW’s big mission is getting people to vote to fight climate change, and that’s something we can definitely identify with.”

Drop In & Vote gets its hop-forward flavor from a combination of Azacca and Idaho #7 hops. At 5.5 percent ABV, the crushable, light-bodied brew is a solid post-powder day beer; which can be found in six-packs at participating liquor stores throughout Boulder and the Denver Metro area, or on draft at the Sanitas taproom. One dollar from every pint sold in the Sanitas taproom and $1 from every six-pack sold in liquor stores will benefit POW and “their charge towards positive climate action.”

“I love to play in the mountains, I love to ski, and I want to see more activity towards keeping winter here as long as possible,” explained Memsic, who also noted the importance of clean water to his business as an overall cause for choosing to raise funds for POW.

Protect Our Winters was founded in 2007 by professional snowboarder, Jeremy Jones. The organization has morphed into a strong community of athletes, ambassadors and forward-thinking business leaders working towards moving the needle on climate change issues in Washington D.C. According to POW’s website, 2017 was the hottest year on record, causing a major loss in vital spring snowpack and decreasing the length of the winter season.

While Drop In & Vote is a limited release beer, and only available while supplies last, Memsic hopes to continue collaborating with the non-profit. In recent years, the brewery has remolded their charitable endeavors, choosing fewer organizations to partner with in hopes of having a larger impact.

“A lot of it’s personal,” said Memsic. “I want to stand for something, and it’s our opportunity and obligation to do something.”