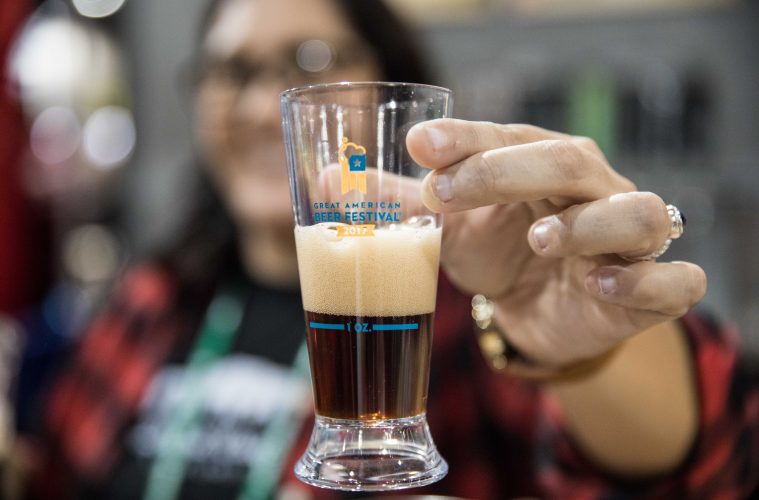 A modern day gold rush took place in Denver over the weekend, with hundreds of bearded men and driven women flocking to Colorado in search of gold, silver, and even bronze at this year’s 36th annual Great American Beer Festival awards ceremony. And just like the big boom of the 1800s, craft breweries from the Rocky Mountain region struck it big — sending a message to anyone questioning the state of the independent craft beer industry that the new guard of small craft breweries entering the market are here to stay. Here are five young Rocky Mountain craft breweries that struck it big at this year’s festival.

If you made it to the festival this year, you know that the crew at Melvin Brewing is hard to miss — and not just because they kicked off the fest by towing a brass brand around the streets of Denver on a flatbed trailer, but because this Jackson Hole-based brewery is making some explosive IPAs that will knock you out of your socks. Melvin not only picked up two gold medals at this year’s awards ceremony (one for Hubert MPA in the Strong Pale Ale category, and one for Wet Hop Melvin in the Wet Hop Ale category), they also took home the award for Brewery Group of the Year. Melvin’s original brewpub, the Thai Me Up, still hydrates and feeds ski crowds in Jackson Hole, Wyoming, but the brewery’s huge growth in the past few years inspired the brewery to expand into a larger production brewery located just down the road in Alpine, as well as open a lively brewpub in Bellingham, Washington. 624 County Road 101, Alpine, WY; melvinbrewing.com

Since opening up shop in Greeley in early 2015, Weldwerks has quietly been dominating many of the craft beer conservations throughout the state of Colorado. In the past two years, Weldwerks has been racking up accolades for their clean, flavorful brews, but it’s what they’re doing with sour styles and barrel-aged beers that really turned heads at this year’s fest. The brewery picked up a gold medal in the Wood-and-Barrel-Aged Strong Stout category, which festival-goers were lining up to get a taste of. The brewery’s Peach Climacteric Barrel-Aged Sour aged with fresh Colorado peaches was also a show stopper, and had many people at the festival working to find Greeley on a map. 508 8th Avenue, Greeley, CO; weldwerksbrewing.com

This small brewery from the small town of Lone Tree managed to snag two medals at this year’s Great American Beer Festival, and rightfully so. Lone Tree won a gold medal for their easy-drinking Mexican Lager in the American-Style Lager or Malt Liquor category, which is currently on tap in the brewery’s cozy taproom. But the big win came in the form of a silver medal in the Imperial Red Ale category for Hop Zombie — a limited release beer the brewery launches every fall. At nearly 9 percent ABV and 90 IBUs, Hop Zombie is a melting pot of eight different hops with a rich malty backbone. Visit this award-winning brewpub next time you shred some singletrack in the area. 8200 Park Meadows Drive, Suite 8222, Lone Tree, CO; lonetreebrewingco.com

Operating in small, 2.5 barrel brewhouse, Baere Brewing is the definition of small — but the flavors coming from this Denver-based brewery are anything but little. One of my favorite beers from this year’s GABF was Baere’s Bring the Greenback — a table sour made with Colorado spruce tips foraged by the brewery which complimented the Simcoe hops in the brew. What makes this beer even better, is proceeds from the brew benefit The Rare Fish / Rare Beer Project — a non-profit organization dedicated to preserving and restoring rivers and endangered fish in Colorado. Baere also picked a bronze medal in the Berliner-Style Weisse category for their delightfully balanced Blackberry Table Sour. 320 Broadway Unite E, Denver, CO; baerebrewing.com

The 2016 Great American Beer Festival was the year for Überbrew, an innovative brewery located in Billings, Montana. Last year the brewery picked up two gold medals, a silver medal, a bronze medal, and to cap it all off, took home the award for Small Brewing Company of the year — a Cinderella story of sorts for a young brewery (Überbrew officially opened in 2012) from the vast state of Montana. Überbrew put Billings on the map as a craft beer destination, and a visit to this place is worth the trip. Not only can you pick up Überbrew’s handcrafted beers in cans, but they’re also serving up a locally-inspired hearty food menu at their brewpub which includes a Kegs & Eggs weekend special for only $9. Swing by this place for a taste of their 2017 GABF silver medal-winning Canu Recreation Ale — a cream ale that just might become your go-to après beer. 2305 Montana Ave, Billings, MT; uberbrewmt.com