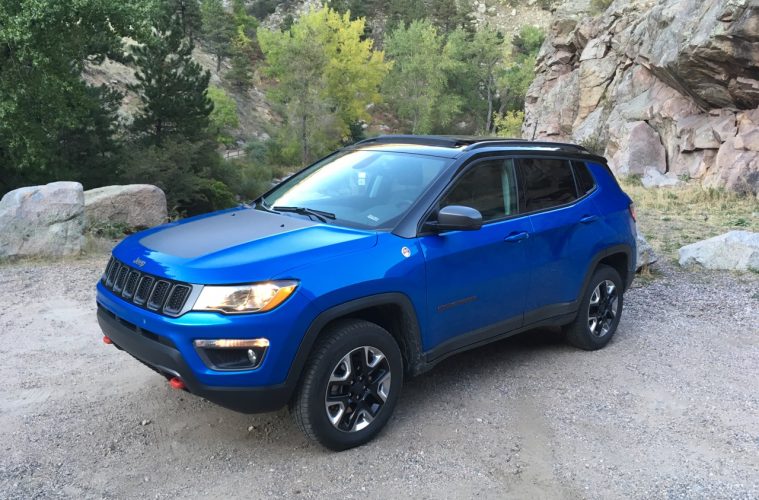 For 2017 Jeep completely redesigned the Compass. If you’re familiar with the previous Jeep Compass, forget all of that. We took the new Jeep Compass up to Beaver Creek for a family weekend getaway to see how it handled a family of four (kids are 3 months and 3 years old), on a road trip. We stayed at the Osprey Hotel and checked out Beaver Creek’s new shoulder season festival, the Hike to the Mic. Read on to see how it handled driving around town as well as the 2+ hour haul up into the mountains of Eagle County, what all we could fit into the vehicle to take with us, what we did and didn’t like about the interior, and more. The 2017 Jeep Compass come in four versions, the Sport, Latitude, Trailhawk, and Limited (no Trailhawk for 2018). We had the Trailhawk and more of those specs can be found at the end of the review. Our model as reviewed was priced at $33,815.

The 2017 Compass handles like a Jeep. It’s better suited on dirt roads or even off road than on. Maybe this is intentional to make it clear that it’s a Jeep, but for long road trips or even just running errands around town the suspension was stiff and essentially rugged. Ironically, it also has some give when cornering and when coming out of sharp turns the suspension has a bit of recoil. It’s far from the smooth rolling on pavement provided by so many other compact SUV’s on the market. The steering felt a little jerky, which plays well to off-road maneuvering around boulders and such but is awkward on the highway. It is certainly one of the more capable compact SUV’s to handle off-road driving available which should put it squarely in the market for those looking to travel on double-track more than paved roads but don’t want to stand out like a monster 4×4 truck when in town. Every version of the new Jeep Compass comes with the same 180 horsepower 2.4-liter Tigershark four-cylinder engine under the hood. Our Trailhawk 4×4 version, with the nine-speed automatic transmission to manage the 175 pounds-feet of torque is designed to be as fuel efficient as possible and for that it doesn’t have much spunk in the acceleration department, even for an SUV.

Jeep lists the towing capacity at 2,000 pounds for all of the 4×4 models, but towing is not recommended with the 2-wheel drive versions. That’s well below the ability to haul the new compact Airstream Basecamp which has a GVWR of 3,500 pounds. But you’d be fine with even the largest of Teardrop style trailers. We reviewed one last year from Colorado Teardrops, based in Boulder. Another unique feature of the Trailhawk is the signature ruby red tow hooks on the front and rear of the vehicle. Although, with that 2,000 pound towing limit, it’s more likely that those hooks are going to be for being rescued more than rescuing (considering the Jeep Compass weighs a bit over 3,000 pounds itself). Still, a nice safety feature—just be sure to only attempt places where you might get stuck with someone who has a vehicle with more towing ability. The Jeep tow-hook. Makes it easier to be rescued from a sticky spot. The small engine is not likely to pull much out of a predicament. The owners manual says the roof top load isn’t to exceed 150 pounds, which is plenty for hauling bikes, boats, boxes, etc. But with the new fad of roof top tents, which can weigh between 100 and 200 pounds on their own (not including you and your crew crawling up there), it doesn’t sound like that would be a good use of the Compass. This antenna is not going to work with a rooftop box. Hopefully they have a sharkfin style available.

The cargo capacity of the Compass is rather small compared to other compact SUVs at 27.2 cubic feet. The floor space of the rear area only measures 28” deep and around 40” wide between the wheel wells. That’s a bummer because a standard 30” piece of roller luggage won’t fit long ways and has to be turned 90 degrees to fit—which makes the efficient packer in me cringe. We just managed to fit the luggage for four of us for a weekend at a hotel into that space. We didn’t even have room for the kid carrier backpack we wanted to take to go hiking with our littles (4 months & 3 years). For us to go camping, we’d need a very large rooftop cargo box, or a trailer. For a single or a couple, the rear seats fold down flat and more than double the cargo space to 59.8 cubic feet. Plenty of room for a luxurious and possibly romantic car camping getaway for two (and the Compass will get you to the most remote site). All packed up. Gear for a family of four on a weekend trip to the mountains staying at a hotel. Camping with this cargo space would not be an option.

After our trip out to Beaver Creek and back from Boulder (covering 247.5 miles) the computer in the Compass told us we averaged 24.5mpg. That’s pretty close to the 25mpg mark of the listed combined city/highway mileage, but a bit below the 30mpg highway rating listed—considering our drive was pretty much all on the highway. Granted, the EPA rating is based on the vehicle being totally empty and on flat ground (their tests are actually done on rollers in the garage). We had the thing totally packed and humped it up to the Eisenhower Tunnel, over Vail Pass and up to Beaver Creek. Nevertheless, that’s great mileage for a compact SUV—your pocket book will be ok without spunky accelerations. The front passenger seat is moved pretty far forward to accommodate the rear-facing baby seat behind it.

For myself, as a person of average size (5’11”/170lbs), the interior of the 2017 Jeep Compass is tight. Even with the driver’s seat set as low as it will go, I felt like headroom was limited. The Dual-pane sunroof did alleviate that contained feeling some when the cover was open and let the extra light in from above. As always, a center console mounted shifter tends to take up valuable space in a compact configuration like this and this was most noticeable with the awkward angle to reach the rear cup holder in the forward center console. Also, while the center armrest slides forward for better placement, it slides over that same rear cup holder which makes it really awkward to reach a stowed drink. As the driver, I insisted on my drink being in the forward cup holder and my passenger had to deal with the futzing around. The center arm rest slides over top of the cup holder. The front seats themselves however are very comfortable and again, this will serve well when off-roading, but on the road the seats didn’t buffer the rough ride of the vehicle itself. In the rear, average size adults will fit fine though headroom may be a challenge for those over 6 feet tall with long torsos.

For the full details on what amenities come with the Jeep Compass, visit Jeep.com.

This is not a very family friendly car for families with young children. It may be fine for a family of four with kids old enough to not need car seats. I’m lucky that my 3-year-old is pretty responsive to me asking her not to kick the back of my seat, because the Compass does not have enough room for me to move the driver side seat forward far enough so her legs won’t reach at all. Similar for the rear-facing baby seat on the passenger side. We had to slide the front passenger seat forward a bit to get the baby seat to fit, sacrificing the front passenger’s comfort significantly. Again, we were pretty crammed in for a simple weekend trip to the mountains staying at a hotel. Camping—and to put the Compass Tailhawk in its intended off-road environment chasing down some remote campsite—would have to be done with backpacking style gear instead of the more luxurious car camping gear. How do the smallest kids take up the most room? Pretty tight with car seats in the back.

For safety ratings of the 2017 Jeep Compass check out these websites: