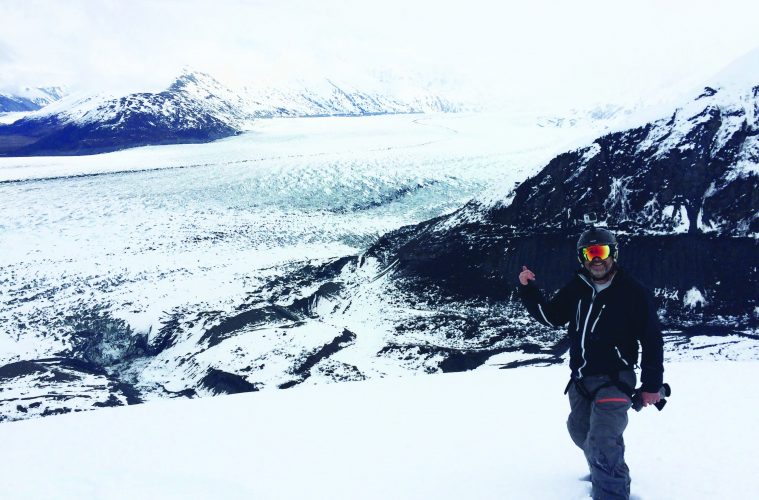 “Doesn’t matter. Not listening. I’m in.”

Maybe I should have paid more attention to that hitch: I had to cook three meals a day for 20 people. But heliskiing in Alaska, without the $10,000 price tag and returning home with a paycheck? Dude, how bad could it be?

I soon learned that waking before dawn to cook a hot breakfast for a lodge full of mega-amped skiers is hard. So is prepping a couple dozen custom-made sandwiches with fresh-roasted meats. So is driving two hours every other day and towing four shopping carts around the Fred Meyer grocery in Palmer, Alaska, checking off a list that spanned several pages of legal tablet. And a four-course dinner six-days a week? Man, that is some serious work.

But you know what was even harder? Standing there watching every morning as a bright yellow AStar full of giddy rippers disappeared over the horizon, headed out for lap after powder-filled lap in one million acres of the Last Frontier.

Then came the day when I finally got to ride in that AStar. After a few hours ripping 5,000-foot laps of pillowy pow on kitchen-weary legs, Call me Cookie! I was ready to sign on for a 10-year contract.

A confession: I’m a heli-skiing junkie. I’m not a cook. I was. More than 20 years ago. I worked the line at a San Francisco joint that would churn out as many as 1,200 Mediterranean-inspired dinners a night. I cooked burgers and steaks as a ski bum in Vail, shredding all day and working all night. I spent weeks in a tent, serving pre-dawn breakfasts and high-end suppers to elk hunters out in the Eagle’s Nest Wilderness, packing everything I needed in on horses.

But that was a previous life, a quarter century ago. Back then, I had energy. I was in my 20s and could ski six hours, work eight hours in the kitchen and then drink beer for four hours. And do it all over again the next day. Now, dangerously close to 50, I can do one of those three things per day. Today, I drive around and type and talk on the phone and ski on the weekends, chasing two daughters who are quickly becoming better than me. Oh, and every night, I cook dinner for my family.

Cooking for four does not, however, translate to cooking for 20. So I was not prepared to shop, prep, cook and clean for a revolving posse of super-fun, goggle-tanned skiers who were dropping mad cash for the trip of a lifetime. And, truthfully, I’m not really prepared to drop into 50-degree funnels of snow that will move and chase you, requiring fast-twitch maneuvering that simply isn’t needed in 99 percent of the world’s lift-served terrain.

I’d like to say I spent weeks poring over menus and training for the skiing. But life is busy. I pounded on this keyboard and chased kids down the hill right up to departure. I had a day to prep on the ground in AK and told myself I’d spend it online at the lodge and create a week’s worth of menus that I could repeat for each group. So it was somewhat disconcerting to learn that the lodge did not have internet.

Those were some long hours in a tired truck in the parking lot of the Fred Meyer, working an overheated phone to create the right dinners and chart the necessary ingredients. Brill’s crew—the hard-charging guides who I’ve know for years—had little faith in me. Why would they trust me to make their meals? To provide them with all the calories they needed to ferry 20 clients through 18 heli rides and upwards of 50,000 feet of vertical? Up to that point, I was the fun-loving guy who’d visit with his own crew of fun-loving guys for turns at Silverton Mountain. None of them had actually seen me work before. They certainly hadn’t seen me cook. They questioned their leader’s wisdom in selecting a clown on fat skis as a chef. Even I was skeptical of Brill’s decision-making in this particular instance.

Unlike a chef with experience, I was extremely inefficient. But it worked. Biscuits and gravy, omelets and pancakes and endless trays of bacon every morning, with fresh fruit, coffee and juice. I roasted beef and turkey and chicken for fresh-made sandwiches, each built to order. Dinners included homemade soups, salads with custom-made dressings, steaks, crab, pistachio-encrusted salmon, halibut in a lemon caper sauce, grilled polenta, roasted red peppers, pureed cauliflower with roasted garlic, seared Brussels sprouts in browned butter. Desserts were simple: fresh berries and whipped cream with maybe a store-bought cake. It may not have been fancy, but it was definitely quality.

The folks at Fred Meyer didn’t take long to notice me. The department heads wondered how certain products were disappearing every other day from the shelves. I would buy up all of their halibut. All of their salmon. All of the pistachios and polenta and red potatoes. All of their fresh-sliced bacon. Every clamshell of berry in the produce department. Eventually they caught up with me and asked how long it was going to last. You see, they said, we order food on ships from Oregon and I was blowing up their supplies.

I probably could have ordered ahead or even used a food service, but I slid into the cooking gig at 100 miles per hour. Even the 14-hour shifts in the kitchen and grocery seemed like a respite from the daily grind at a newspaper where the workload is always increasing while staff numbers are constantly dwindling.

Once I was in the kitchen though, I planned and prepped ahead. For good reason, and it wasn’t about being a good chef. You see, the call to jump onboard that AStar could come at any minute.

Every so often, a client would bail for an afternoon, or God bless them, an entire day. Silverton Mountain Guides is not AK 101. Clients start the first run of the first day on the stuff that most helicopter outfits reserve for grizzled veterans of Alaska heliskiing. Since guests are vetted back home in the helicopter on Silverton Mountain’s notoriously terrifying terrain, there is no need for the gradual stepping up into the AK goods, a time-worn strategy employed by just about every other helicopter outfit in The Last Frontier. With Silverton Mountain Guides, the day features gut-churning exposure on every run and stays full-throttle throughout the week (the operation prides itself on offering 10-18 runs a day as opposed to the measly six that the usual heli outfit guarantees).

When the guests would return from that first day, I would scan them for the weak-link. I became familiar with the signs of fear: They pass on beer and cocktails and wine. They leave food uneaten. They huddle on the couch in the dining room—the only place where cell phones work—and whisper to spouses back home. They ice ankles and knees and shoulders, staring into the middle distance. They retire to their cabins early with a stack of DVDs from the lodge library.

I watched them like a lion on the edge of the herd and I cooked the next breakfast in my base layers. Just in case. Most often they left in the morning. But when the ship returned for midday re-fuel, chances were good the fearful/nervous/worked would be onboard. And there would be Cookie at the helipad, dressed to ski.

The oven was on low, the steaks were seared, dinner was prepped and I was ready to join skiers who’d trained for months and were days-deep in their heli adventure.

I’d catch the first ship home at the end of the day and race to the kitchen in my Langes. I cooked more than a couple of dinners in ski pants. My legs wobbled. My grin didn’t.   It’d crack my sunburned face for the next week despite the four-hour trips to the grocery, stacks of dirty dishes and 4 a.m. alarms.

It worked. I worked. And I was getting paid to go heliskiing in Alaska.

Jason Blevins lives in Eagle, Colorado, and has covered the ski industry, mountain business, and adventure sports for The Denver Post since 1997. last season, he logged more than 60 days on the hill, most of those with his wife and two daughters.