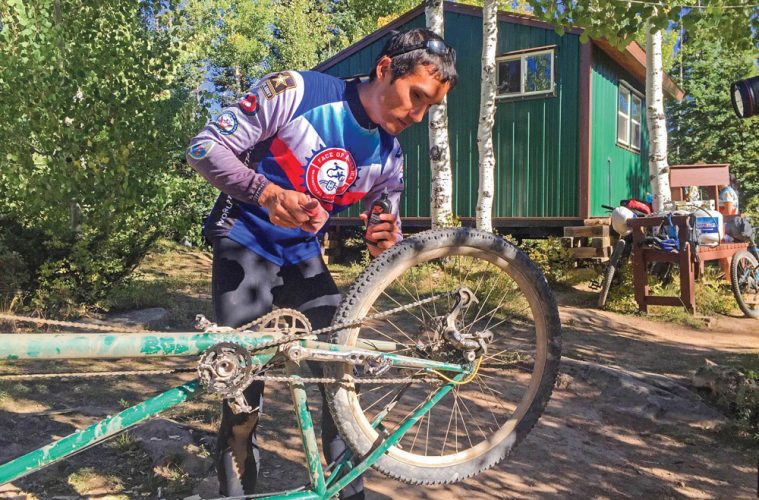 It’s a time-honored ritual for bikers to trade first snow in the mountains for cottonwoods blazing in the desert. But to me, the grinding, road-trip transition from high country to slickrock—missing everything in between—has always seemed jarring by car.

So last September, I joined Joe Ryan, owner of the San Juan Huts, and his wife Anne, director of LEADs (an adventure coaching agency), on a mountain bike ride from Telluride to Moab. Our mission: accompany a wounded veteran, Steve Baskis, 215 miles on a bike.

Steve’s life since he served in the Army in May 2008 defines the meaning of bravery. That year, a command-wire-controlled, lethal projectile blew through the side of his armored vehicle and exploded in a burst of deadly shrapnel. Body armor saved Steve’s life, but the sergeant he’d been sitting next to didn’t have a chance. Mercifully, Steve had been knocked unconscious, bleeding out from his face, neck, arms and legs.

He recalled, when he awoke: “I knew my eyes were damaged real bad but I was hoping it was okay.”

Transferred to the Walter Reed Hospital from overseas, he learned that he was permanently disabled—blind at 22 years old. He’d also lost hearing in his right ear and feeling in his nearly amputated left arm. “I had 22 years of vision,” Steve told me, “so I’m not complaining.” He began kayaking and then climbing the Seven Summits; he still had all of his life in front of him—without the golden leaves and soft light of fall that I’ll never again take for granted while cycling through (or to) paradise.

Halfway up the Silver Dollar Road from Telluride, we started pedaling to the first hut. Steve and his pilot, Anne Ryan, led on a tandem bike. Although he hadn’t ridden a mountain bike since Iraq, Steve has logged thousands of road bike miles surrounding his home in the Midwest. Anne, an ace bike mechanic, is a frequent mountain bike competitor—no guarantee, it turned out, from bottoming out, stalling and splashing her in a cavernous mud puddle. Steve danced out of the water, mostly dry; Anne was soaked, but also smiling big.

Joe brought up the rear with their teenage son, Nolan, Steve’s brother, Kevin and Victor Henderson, videographer and partner in Steve’s Blind Endeavors Foundation (which raises awareness for the handicapped through adventure) following. We spent the last hour pumping up the final switchbacks to the top.

At Silver Dollar, the first of six huts we reserved, Joe gave us the tour. His chain of 20 humble biking, backpacking and ski huts hide in the woods alongside composting outhouses. Joe, as I would learn over the next week, blithely spends an hour below—rather than on—the throne of each and every tall outhouse. Stooped over in the surprisingly odorless vault here, he stirred the waste with wood shavings, then shoveled this rich fertilizer into a composting bin—locked against inquisitive bears. Within a year, Joe will scatter the compost-turned-into-soil in the forest.

The outhouses are hardly the main draw, just another smart amenity in this environmentally astute and well-built hut system. Truly, the huts are perfectly spaced for a long day’s ride. They are spectacularly located and offer lodging for up to eight riders. Here’s how it works: squeeze a few warm layers into panniers, top off your CamelBak, and cruise 28 to 40 miles a day—gaining and losing thousands of feet in elevation—on back roads and singletrack. The huts are stocked with beer, ready-to-cook foods and sleeping bags. You play cards and Trivial Pursuit, make journal entries, read, stargaze, sleep, then wake up, ride and repeat, down mountain ranges, across high plateaus and into the desert.

That night at Silver Dollar, I heard Steve slip out of his bunk and tiptoe out the door to pee. Forty yards out in the chill, high-altitude air, he got disoriented and walked further away from the hut. Several minutes later I heard him say: “Somebody?” Then louder, “Somebody please?”

Rushing to the door, I said, “Hi Steve,” and guided him back to the hut. Lying in my bunk, I wondered about the disorientation (more likely panic) I would’ve felt alone and outside, blinded in a permanently dark wilderness. I couldn’t imagine how one would manage the myriad of daily chores-cum-puzzles one must navigate in a sightless world. Particularly on adventurous expeditions (e.g., climbing Kilimanjaro and Elbrus) that Steve regularly embarks upon. I couldn’t, so over the next week, I tried to let go of how I saw the world and adopt Steve’s perspective, learning to be reactive instead of proactive, relying on touch and good communication.

In the morning, we coasted 2,000 feet out of the San Juans to the highway on Dallas Divide. We breezed past glowing, trembling aspen leaves, through air redolent with the honeyed rot of autumn. I rode next to a grinning Steve and asked, “Isn’t the air sweet?”

“I haven’t been able to smell anything since 2008,” he answered,  lifting his arms and mimicking a bird as he balanced behind Anne.

She smelled the brakes overheating on their long-framed bike, so they stopped at a stream and splashed the smoking discs with water. Steve was clearly reacting proactively, feeling the lack of pressure in her pedaling, her back stiffening, the front tire hitting jarring bumps.

This is how it went for a week of perfect autumnal weather—from Spring Creek to Columbine Huts, then from Graham Ranch to the Gateway Huts. The whole time, Steve made us laugh. “Got to hut and it was dark,” he wrote in one logbook. “I go to sleep hoping for it to be light in the morning.”

Always a philosopher, even while pedaling, he pondered aloud whether regaining consciousness after the explosion had brought him into the afterlife. Even on this bike ride—unable to utilize most of his senses—he mused about whether he had entered some sort of purgatory.

Sipping a cold beer with him on a picnic bench outside the town of Gateway, we took in the spectacular sandstone towers in front of us. At one point, he put down his IPA and stood. Ever the joker, he excused himself to go to the bathroom. Before heading off, though, he fiddled with his prosthetic eye. He pulled it out, and placed it next to his can of beer.  “Keep an eye on this, will you, Jon?” he said to me.

Leaving Gateway Hut on the sixth morning, we began the 5,000-foot climb to the last hut beneath the La Sals, blanched with the season’s first snow. The climb approached an 18-percent grade, and while Steve wouldn’t stop pedaling, Anne prompted constant banter, even at the most muscular of speeds.

I focused doggedly on keeping up their pace. Our final destination was now just a day away. Cottonwood leaves were already turning and I realized the bike ride would be over in Moab. I repeatedly breathed in the sweet aroma of fall. Two thousand feet above town, I traced my fingertips over the edges of dinosaur tracks, cast in stone. A raven squawked in the distance. And then, as I began the long descent toward the end of this stimulating trip, I watched circling hawks, lengthening shadows, tawny golds and flickering red leaves go by as if I had never seen any of them before—as if I was now seeing them for Steve.

Jonathan Waterman lives in Carbondale, Colorado. He is the author of 12 books including The Colorado River: Flowing through Conflict. Between remodeling his home and building a tiny house, he makes frequent trips to the desert.

To book a bike trip or just some down time in the San Juan Hut System go to sanjuanhuts.com.