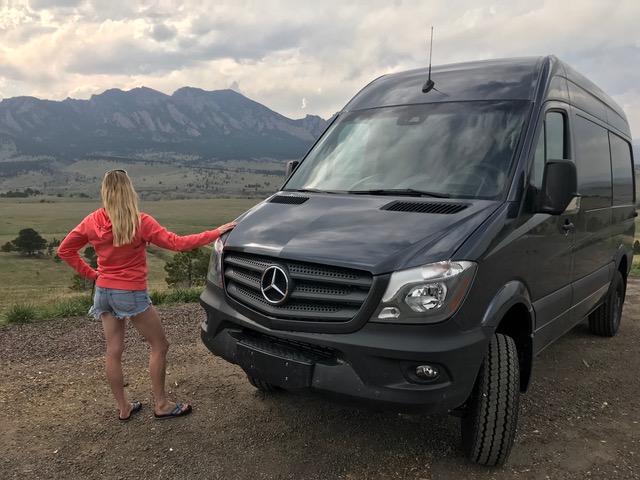 “No, Dirtbag, I Won’t Give You My Sprinter Van!”

The ink on my Sprinter’s title wasn’t dry yet when Outside published Cedar Wright’s scathing rant on tricked-out vans. The world-class climber, a dedicated dirtbag who slums around in a Dodge Grand Caravan, grumbled about an infestation of Sprinters at popular climbing spots in Rifle. Climbers have gone soft, he says, lamenting that one friend after another has fallen “victim to the temptation of the massive tricked-out cargo van.”

I had just returned home from Whole Foods and was sitting at my desk in Boulder, Colorado, staring out the window at my gleaming Sprinter High Roof 144″ 4×4 when Wright’s words leapt off the computer screen and seared my eyeballs: “Give your Sprinter to a real dirtbag.”

It was like a needle scratching across a record. I’m not a climber but I definitely have dirt running through my blood, and I’ve been dreaming of van life before it was #vanlife. Can I not be a dirtbag in a Sprinter?

I feel for him, but I don’t feel bad. My whole life led up to this day.

My obsession with vans germinated in college, when my boyfriend (now husband) and I set out on an epic road trip in my 1983 Saab 900 hatchback, spending three weeks cruising from Boulder to California, Oregon, Idaho, and Wyoming. Our first stop was San Francisco to catch the Jerry Garcia Band at the Warfield. It turned into one of the most fun nights of my life.

After the show we stumbled out of the theater, and lacking Google maps and cell phones, drove off into the city with a vague intention of finding somewhere to sleep—preferably in the car. People familiar with those old Saab hatchbacks know the rear seat folds down into a dirtbag-worthy sleeping space.

Somewhere on Market Street a bewildering array of bus lanes, railway tracks, and left-turn lanes fused into confusion, and we slammed on the brakes at a red light. Bam! I swiveled my head around and saw a VW bus crunched into the back of my car. It wasn’t a tricked-out hippy mobile. It was a non-descript white specimen with no license plate. After hitting us, it drove away.

Before I could compute what was happening, we were on a low-speed chase through the city.

The van would pull up to a stop sign, teetering at the edge of a steep hill, and then dart across the street just as a car was about to pass. We’d gun after it and catch up after half a block. At one point the van pulled over in a deserted neighborhood. The door slid open and a gaggle of punk rockers spilled out, surrounding our car. One bent down behind the Saab and tried to stuff a banana in the tailpipe. We jammed the car in reverse and nudged the guy out of the way. True story. You can’t make this shit up.

The chase ended anticlimactically when the van pulled over at an apartment building and the thugs disappeared inside. Left on the street staring at a van with no license plate, we had no idea what to do. Where is a cop when you need one?

“We sure would like to have that van,” we smirked.

After a while we took off in search of somewhere to sleep, ending up in a Walmart parking lot. I clamored out of the car exhausted and tried to open the back hatch. A huge dent had crushed the latch, cementing it closed. Shit. We spent the next three weeks having to climb through the front doors to get into the back, wishing we had a van. We craved that freedom to drive anywhere and pull over on a whim to sleep.

But there was no way we could afford one. A year later I graduated from college, landed an internship at an environmental education company, and put my van dreams on hold. My $500 per month stipend didn’t stretch far past rent, so I worked nights as a checkout clerk at Colony Market, a dilapidated grocery store that occupied the North Boulder shopping plaza where now spandex-clad cyclists, skinny-jeaned hipsters, and Lululemon-wearing soccer moms line up to order soy chai lattes at Vic’s.

Nights spent in the Saab continued to fuel a desire for a van. One winter evening we posted up in a Breckenridge parking lot for a powder day and tucked into our sleeping bags. Our breath froze onto the windows, creating a handy privacy shield. In the morning we brushed our teeth in front of families traipsing out of condos in their ski boots, looks of horror on their faces.

Our early 30s brought a renewed sense of wanderlust, prompting us to quit our jobs to backpack around the world for a year. We sleazed through Asia on $5 a day, haggling over pennies with tuk tuk drivers and enduring bumpy overnight bus rides. In New Zealand we sprang for relative luxury, renting a van to drive around the South Island for two months. It was a simple cargo vehicle “tricked out” with a bed platform, storage space underneath, and cute gingham curtains that helped distract us from the curious way the van pulled left on the road. No doubt we got a screaming deal because it had been in a bad wreck. But we didn’t care. It was home.

A longing for ventilation sprang from this trip. One soggy night I woke to an incessant buzzing in my ear. Smash! I crushed a mosquito. The annoying sound resumed. Smack! Smash! I killed five more. “What is going on?” I thought. Turning on my flashlight, I saw a cloud of mosquitoes in the van. Smash! Smash! Smack! Swat! I inflicted carnage for an hour before giving up. “I can’t take it!” I screamed. We pulled out of the campground, headlights blazing through the night, and woke up an innkeeper for a room. The next morning I spent two hours wiping smeared carcasses off the van walls. “Why, yes,” I thought.  “A fan and screened windows would be nice.”

The next time we looked into buying a van, about six years ago, we built a small house instead. We’d been eyeing Sportsmobiles and their daunting price tags. It made more sense to build a garage apartment so we could rent out our house and save up for a van.

After moving into the garage, we celebrated with a trip to Iceland, driving a van around the country’s perimeter for two weeks. As I shivered in Westfjords, sleeping in seven layers, I thought, “Too bad the van’s heater doesn’t work.” The fridge didn’t work either. Nevertheless this road trip sealed the deal. “We love van life! We’re ready! Let’s do this!” we said when we returned home to Colorado.

And the search ensued.

Anyone who has tried to buy a 4×4 Sprinter knows they’re not easy to find. The wait when ordering a new one can be more than a year. Used ones are few and far between.

“I don’t want a brand spanking new van,” I said. “I want an old beat-up one.” I joked that if we managed to buy a new one, I’d bash it with a baseball bat before we pulled out of the lot.

And then a month ago, my husband was trawling Craiglist. “Hey, here’s one,” he said. “It’s in Vail, and it’s almost exactly what we would order. And it has only 120 miles.” We couldn’t believe our luck. Somebody had bought a Sprinter, driven it home, and changed his mind. We pounced.

Back at my desk, I’m basking in the glow of our Sprinter and dreaming of how to kit it out, which might require a second mortgage. For now we’ll toss a mattress in the back. It’ll take at least two years to cobble together the inside, and I probably won’t be baking any cookies in it. But I’m pretty damn sure that in 30 years I’ll still be driving it, by which time it will be considered vintage. Maybe by then I’ll have earned some street cred.

But don’t worry, Mr. Wright, I won’t be crowding next to you at the base of a crag. That sounds like a total shit show. More likely I’ll be camped on a beach in Baja so I can kiteboard every day. And you can bet your ass that when I’m sleeping in my Sprinter, I’ll be dreaming of what it’s like to be a real dirtbag.

Avery Stonich is an award-winning freelance writer based in Boulder, Colorado, who has traveled to more than 50 countries in search of adventure. Visit her website at averystonich.com and follow her on Twitter and Instagram: @averystonich.