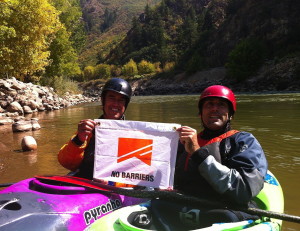 Barrier: Noun/bar-ri-er/something (such as a fence or natural obstacle) that prevents or blocks movement from one place to another.

What is a barrier? That is a potentially complicated question. To someone in a wheel chair it could be a set of stairs. For a dyslexic it could be a drive-thru menu board. For an elderly person it could be something as simple as getting out of a chair. The point being made here is that the definition of a barrier changes depending upon whom you talk to. One individual’s potential stopping point could be another’s starting line. You never know.

That’s one of the lessons that the No Barriers Organization has learned over the last decade as they have worked to create a world where anyone can overcome obstacles placed in their path. “As we continually evolve we have come to realize that anyone can have barriers, not just the handicapped,” says Erik Weihenmayer, NB’s Co-Founder. “We have people reaching out to us with issues ranging from obesity to phobias. We are trying to teach people that anything can be conquered.”

By focusing on six key elements that they believe, once mastered, provide the tools to overcome any barriers; the leaders of No Barriers believe they have created a program that can make a lasting change in the lives of anyone who embarks on a journey with them. Last week they held their annual summit in Salt Lake City where over 1,000 people spent four-days learning how to master their lives.

With a roster of individuals that have overcome their own barriers in life—Olympian Any Van Dyken Rouen, blind artist John Bramblitt, comedian Josh Blue, and blind adventurer Erik Weihenmayer, plus scores of others, attendees were able to mingle with like minded individual facing their own barriers. The idea of the summit is to create a community of people that support, and understand what it talks to overcome.

Using traditional outdoor activities such as rope courses, climbing, and hiking, No Barriers is able to force participants outside of their comfort zones. But, it is not all about physical challenges, they also had seminars and presentations designed to open up people’s perceptions about what is achievable. And it is working. “Every year we are flooded with success stories from participants after they leave telling us how their lives have changed,” says Weihenmayer. “It is one of the reasons we are looking to expand the program over the next five-years with the goal to touch over one-million lives.”

They plan on doing that by holding several mini-summits in key cites across the U.S. starting this summer. The idea is to take their largely successful Summit plan and distill it down to several key elements and take it to individuals who cannot make it to Utah for a week. They also are looking into expanding their Warriors program that takes participants out into the wilderness to achieve goals they previously thought out of reach. With a large influx of wounded veterans returning to civilian life along with the already underserved population of folks with a variety of issues holding them back from normal life it seems that No Barriers won’t lack in finding willing participants.

So while Weihenmayer and his team take their message to the masses, check out their foundation and offer them support if you can, or if you know someone staring at a seemingly insurmountable barrier pass along their info. Maybe they can help.