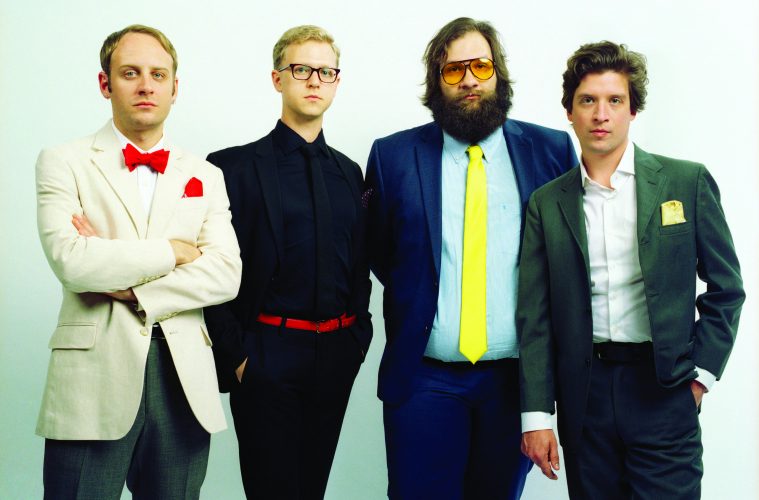 Bluegrass expansionists the Infamous Stringdusters are bringing a two-night Halloween stand back to Denver for a second straight year, holding court at the Ogden on Friday and Saturday. No strangers to Colorado, they’re returning after a recent ripping set at Rockygrass and a slot opening for Ryan Adams at Red Rocks in June. As theater headliners, though, the nimble-fingered quintet will go deeper, likely delivering two long sets of progressive string explorations. Expect surprises, too, as the band peppers its shows with a range of covers. For a taste, check out the EP “Undercover,” which features acoustic takes on Pink Floyd’s “Fearless” and Tom Petty’s “American Girl.” Minnesota-based stringbusters Pert Near Sandstone will open on the first night, while the second will feature Midnight North, a California folk-rock band that includes Grateful Dead bassist Phil Lesh’s son, Graham. Playing the Ogden Theatre in Denver on October 27-28.

More Jams: If you dig what you hear from Midnight North, the band will also be at the Fox Theatre in Boulder on October 29.

Rumors have been swirling for some time that Corgan is trying to reassemble the original line-up of the Smashing Pumpkins, but in the meantime the ’90s alt-rock icon hits the road behind a new album, “Ogilala,” which drops October 13. The new effort, released under the name William Patrick Corgan, finds him working with mega producer Rick Rubin, but the results are more subdued than what you’d expect. The record’s first single, “Aeronaut,” is a dramatic piano ballad that features Corgan’s distinct, nasal croon lifted by swells of strings. In a statement about the album, Corgan said he let Rubin take lead on the sonic direction: “Having written the songs for voice and guitar, I put myself in Rick’s hands to take the music wherever he’d like. Normally, I would have done more, and tinkered more on production, but rather Rick put the onus on me to deliver at a molecular level via live takes. The rest was simply a reaction.” Playing the Boulder Theater on October 29.

More Melancholy without the Infinite Sadness: Masters of mellow, Real Estate, will bring its airtight indie pop-rock to the Fox Theatre in Boulder on October 30.

Electronica fans looking for a Halloween-themed fix should spend the weekend with Papadosio. The improv-minded quintet blends the pulsing digital soundscapes of STS9 with Phish-y jazz-rock explorations, and its shows are often just as visually interesting as they are sonically intriguing. The band’s headlining gig at Red Rocks back in May featured the work of popular visionary artist Alex Grey. Dubbed Rave from the Grave, the group’s two-night stand at the Boulder Theater will feature support from Dynohunter and Bass Physics. Playing the Boulder Theater on October 27 and 28 and the Aggie Theatre in Fort Collins on October 29.

More Electronica: Simon Posford will bring his Shpongle project to the Fillmore in Denver on October 27.

Deer Tick went four years without releasing any new music, but the indie folk-rock mainstays made up for lost time by releasing two albums last month. “Deer Tick Vol. 1” and “Deer Tick Vol. 2” bridge the different sides of the band’s dusty punk sound. The first is predominantly acoustic, leaving room for the blue-collar ruminations in scratchy-voiced frontman John McCauley’s lyrics to surface. “Vol. 2,” on the other hand, showcases the band’s brawny, bar-rock side with plenty of full-throttle distortion. In turn, shows on Deer Tick’s fall Twice is Nice Tour will feature two sets, one acoustic and one electric. Playing the Black Sheep in Colorado Springs on October 27 and the Gothic Theatre in Englewood on October 28.

Post-Black Crowes, Chris Robinson keeps trucking with his band of shaggy road warriors that likes to indulge in expansive psychedelic rock. Known to loyal fans as the CRB, the group tours relentlessly and continues to crank out new music. Back in June, the band released “Barefoot in the Head,” its fifth studio album since forming in 2011. The record jumps from the dance-ready, groove-rock of opener “Behold the Seer” to hazy country rambles (“She Shares My Blanket” and “High is Not the Top”) and mystical folk meditations (“Dog Eat Sun”). As a seasoned live act, the Chris Robinson Brotherhood likes to augment its own material with an eclectic range of covers. Recent set lists have featured classics such as The Velvet Underground’s “Rock and Roll” and The Kinks’ “Where Have All the Good Times Gone?” Playing the Gothic Theatre in Englewood on October 31.

More Dusty Grooves: Hiss Golden Messenger, the Durham, North Carolina act which leans to the indie side of the Americana world, plays the Bluebird Theater in Denver on October 30.