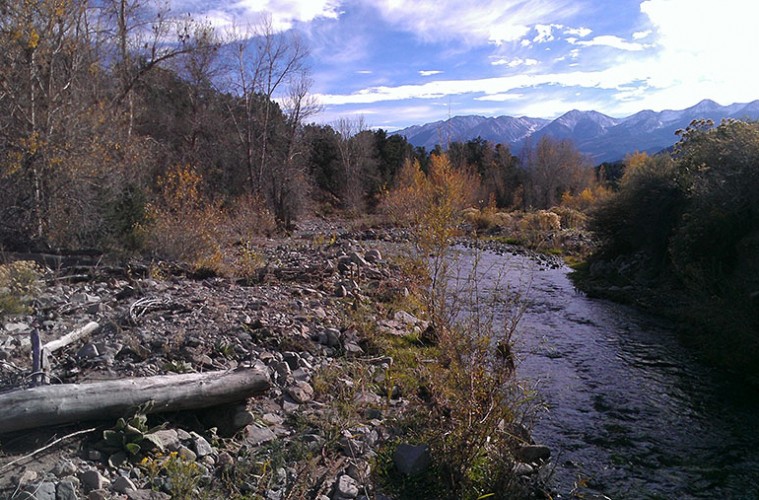 Get Involved: The Bureau of Land Management’s Eastern Colorado Plan

The drive down US 285 is one of Colorado’s most iconic; encircled by mountains, ranches, and the wild terrain of Central Colorado, it embodies much of the diversity and eclectic mix of interests that make up the state. The Arkansas River cuts through this swath of land and provides ample opportunities for fishing and rafting, as well as granting water to the many ranches and farms that contribute to the food and livelihoods of countless Coloradans.

Currently, the Bureau of Land Management is drafting a plan to dictate how this land, and many other areas scattered throughout Eastern Colorado totaling 668,000 acres and 6.8 million acres of BLM managed mineral estate, will be used in the decades to come. As diverse as it is extensive, the area constituting this massive acreage stretches from Cañon City to Leadville, and encompasses plains as well as high alpine terrain. Land use plans take years to draft, and create a guideline for decisions about land use within the given area for at least twenty years. Land allocation decided in the drafting process for the Eastern Colorado Resource Management Plan, or the Eastern Colorado RMP, will create a guide for decisions about conservation, recreation, grazing, energy development, transmission lines, logging- pretty much anything the land could and would be used for. With a growing population, and many interested parties that include environmentalists, recreationalists, ranchers, miners, and the oil and gas industry, the Bureau of Land Management has the enormous task of creating a plan that falls within the framework of the law, while also meeting everyone’s needs.

The Process
However arduous this may seem, the drafting process for the BLM’s Eastern Colorado RMP isn’t shrouded in layers of bureaucracy as one might assume. In fact, the BLM is launching a new format for this process, dubbed Planning 2.0, which promotes transparency, and heavily depends on public involvement. Members of the Royal Gorge Field Office, which is in charge of the Resource Management Plan, explained that much of Planning 2.0 hinges on public input, and that because of the length and scale of the drafting process (land use plans typically take anywhere from 4-8 years to put together), they have organized both recreation focus groups and envisioning meetings with the purpose of asking participants, “What do you want from your public lands?” Resource Management Plan Project Lead, John Smeins, explained that the drafting process the BLM will be using for Eastern Colorado aims to keep the public in touch with BLM officials. “The new process of Planning 2.0 creates more of a conversation between us and the public. This land use plan really affects everyone, whether they know it or not, and we want to get everyone involved in creating it,” he said. In this sense, the revised land use drafting process seeks to decrease the time between plan revisions, and keep the comment period open as well.

Outside Influence
Other groups around Colorado are also using the drafting process as an opportunity to get the public engaged in decisions that will affect the land that many live and play on for years to come. Conservation Colorado and Wild Connections both have had a hand in getting people involved in the Eastern Colorado RMP discussion. John Sztukowski, of Wild Connections, has been involved with the project for over two years, and has helped to increase advocacy for land preservation by helping the BLM take inventory of land with wilderness characteristics. “It’s a huge project, and they’re really receptive to feedback,” he said. Sztukowksi helped make the case for nearly 250,000 acres of land with wilderness characteristics that is being considered in the drafting process from the BLM’s original inventory of 77,000 acres. “They [the BLM] often find discrepancies between current land use and previous inventory, and they appreciate outside input in the process of drawing up a plan for land use.” While the BLM will also have to accommodate for industrial use along with conservation, Sztukowksi hopes that much of the inventory he has mapped out will help preserve wildlife habitat and recreation outlets for future generations of Coloradans.

Conservation Colorado has similarly taken a proactive role in assisting the BLM with a public use plan that balances environmental protection with development and private use. Scott Braden, Conservation Colorado’s Wilderness Advocate and Policy Lead, explained the importance of public awareness and involvement in the drafting process for Eastern Colorado’s RMP as pivotal, as it guides land use in an area that is heavily trafficked by the Front Range for the next two decades. “The land in the Eastern Colorado RMP is pretty extensive as it goes from southeastern Colorado all the way up towards Leadville, and encompasses the Arkansas River headwaters. As more and more people from around the state use this land each year, it’s important to put together a plan that balances recreation, preservation, and more extractive uses,” he explained.

What do you want from your public lands?
The common thread between all of the parties involved in developing the Eastern Colorado Resource Management Plan is the importance and value of public input. Although the BLM has been proactive in organizing meetings for members of the public to have their voices heard over proposed land use, the numbers turning out for the meetings has oftentimes been disappointing. Scott Braden, of Conservation Colorado, similarly echoed the sentiment that many people who use the land avidly for recreation are unaware of the land use plan being drafted, even if it directly implicates land on which they regularly hunt, fish, or hike. While groups like Wild Connections has been organizing hikes to familiarize people with some of the areas this land use plan will affect, the biggest way to have an impact is to directly get in touch with the Bureau of Land Management.

“The purpose of restructuring the drafting process is to encourage more people to get involved with decisions about the future of their public lands, ” explained Kalem Lenard, the project’s Outdoor Recreation Planner, “This is a long term vision for a large area of Colorado, and public input is so important for us to create a vision that people are happy with.”

Get involved by contacting the Bureau of Land Management’s Royal Gorge Field Office, or connect via the Royal Gorge Recreation page on Facebook.