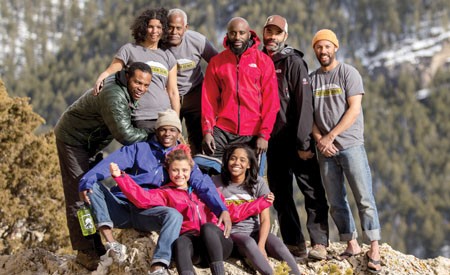 Editor’s Letter: Expedition Denali and Diversity in the Outdoors

This magazine is not very diverse. It is a fact that bothers me, especially since I have sat through and promoted countless events, and speeches, and work groups, and brainstorming sessions focusing on how to make the outdoor industry more diverse. I have criticized the industry for talking about the issue over and over again without making any real difference, and yet, my own magazine is mostly a gallery of smiling white faces. The truth is this is pretty much what the outdoor space in Colorado looks like. It’s just not very diverse and it could be even more egregious to simply stuff diversity into the magazine to make it look different—that would be patronizing. It’s a conundrum. How do we make the outdoor space more welcoming to a wider range of people of different backgrounds? Expedition Denali is making a real difference in that arena, but first, we need to show why it matters?

The demographic makeup of the U.S. is changing. There is no one racial or cultural group that’s “American,” and few in the growing minority groups are visiting national parks or becoming skiers and mountain bikers. Why? For one, there just are not many people who look like them in our outdoor world, which paradoxically makes them less willing to be here. Then, there are cultural differences. Like it or not, moving to Boulder to bike with your lab and improve your Strava times is a bit of a privileged white-person idyll. It’s not necessarily what many members of the African-American or Hispanic community see as living the dream. Or is it? The real, complex answer comes down to individuals rather than broad ethnic generalizations.

The National Outdoor Leadership School (NOLS) decided to face the issue… on a mountain face. Expedition Denali (expeditiondenali.nols.edu) was the first African-American team to attempt to summit the continent’s tallest peak. Like so many others, the team decided to head down with the summit in sight last June when deadly storms rolled in. But the trip was just the catalyst for educational tours and a film that the team hopes will inspire kids to follow in their footsteps. It wasn’t so much an attempt to show that African-Americans could climb Denali for the sake of diversity as it was a chance for the team members to share their love of wild places with kids who rarely hear people like them talk about climbing.

We can’t deny race, and yet we also can’t deny that there are simply people like the Expedition Denali team who just love to explore the wild. It’s about individuals as much as ethnicity. As James Mills, who is writing a book on Expedition Denali, told me when it comes to the minorities-in-the-outdoors issue: “The question isn’t why don’t black people spend time outdoors. The question is why don’t you spend more time outdoors or you or you or you. Ask yourself that question regardless of the color of your skin and decide whether or not it matters. The life-affirming benefits of physical exercise and establishing a worthwhile relationship with nature can be incentive enough for most. Add a sense of adventure and the desire to escape from the work-a-day world of modern society and you’ll find all the reasons you need. The simple fact remains, no one’s stopping you.”