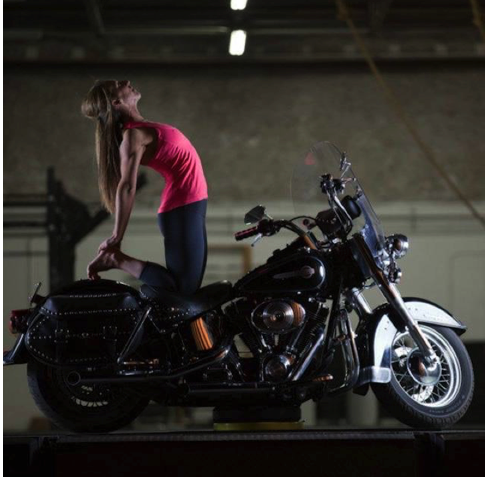 Being a badass is more than just a title, it’s a lifestyle.

Lisa Fierer, a yogi that lives in Boulder, Colo., shares what it’s like being a badass, how to overcome a challenge, her favorite thing about living in Boulder and the one word she picked to describe herself.

While doing a handstand on a stand-up paddle board (SUP) is badass, Fierer explains that being a badass has a lot more depth to it.

“What’s really exciting to me is to witness someone overcoming their fear of falling, or discovering they do indeed have ‘what it takes’ to get into a headstand, allowing them to see the world from a different perspective. In seeing the world differently, we see ourselves differently. And that’s badass.”

Clearly, there’s more to being a badass then meets the eye. Fierer, who has done a balancing yoga pose on a Harley, who has traveled around the world to teach yoga, believes that being a badass every day is imperative, and it’s important to move past the idea that adrenaline is the only way to deem yourself a badass. For example, she aims to be more badass while brushing her teeth.

Yoga, meditation and Sanskrit have played an integral role in Fierer’s life and it’s taught her valuable lessons. One is how she overcomes a challenge.

“Overcoming a challenge is great but first it’s important to understand it. Challenges come so we can learn from them. I call them ‘gifts wrapped in poo poo paper.’ At first, we might be dissuaded by how much that particular thing stinks. But, with curiosity and exploration, we begin to see that buried beneath the smelly exterior, there’s quite a gift. A gem of learning we may not have experienced any other way.”

When facing a challenge, Fierer suggests to snuggle up to it and to let it teach you something.

“We live in a culture where we are encouraged to always fix problems. If I am perpetually fixing, then I am constantly broken. When I’m inquisitive, I’m open. And when I’m open I can see ways through obstacles I may have missed.”

Originally from Illinois but a local Boulderite now, Fierer says her favorite thing about living in Boulder is not the 300 days of sunshine that one might guess. Instead, it is the light. As a yoga practitioner and instructor, Fierer knows the importance of acknowledging both the light and the dark. She says Boulder reminds her of the light.

Fierer is a role model, badass and someone we can all look up to. The word she decided to use to describe herself sums her up pretty well, and that word is supercalifragilisticexpialidocious.

For more information about Lisa Fierer, her upcoming memoir, and the yoga classes she teaches around Boulder, visit her website, lisafierer.com.