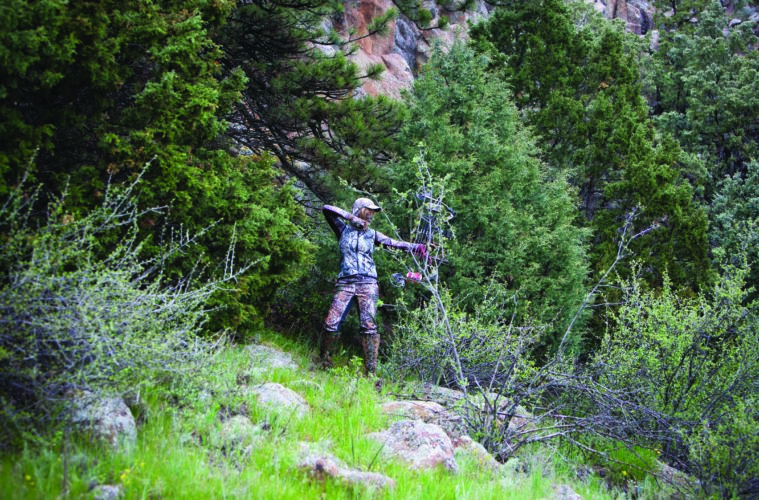 At Home in the Woods

How a light-and-fast backpacker learned that those same skills applied to hunting. And how she found a surprisingly deeper relationship to the wild.

My husband Alex and I were en route to the Needleton stop on the Durango-Silverton steam-powered railroad, and the train steadily lurched on as I anxiously watched the rain outside. From Needleton, we would hike in six miles to Chicago Basin where we would set up camp to attempt to climb four Colorado fourteeners—Sunlight, Wisdom, Eolus and North Eolus. As the train slowed to a stop, we exited, retrieved our bags, and began hiking.

A few miles in, Alex and I took a break under a steady drizzle on the side of the trail surrounded by lush, green, wet forest. The rainy season in the San Juans had taken hold.

A group of hunters soon appeared, all dressed in camouflage and steadily pacing by us one-by-one. As they passed, something caught my eye—a compound bow strapped to the front of a large, camouflaged pack. It never occurred to me that hunters would be in the same area as backpackers, let alone this deep in the backcountry. I had recently entered the world of hunting, having taken a hunter’s education course a few months before this trip and I was dead set on using a rifle. The thought of bow hunting, let alone bow hunting in the backcountry, had never crossed my mind.

In the end, we never reached the peaks of those fourteeners; between attempting to wait out a snow storm at Twin Lakes and massive thunderstorms dropping snow high on the summits overnight, the proper weather window never opened up for us. But as we left the basin and crawled into the train for our return trip, I couldn’t stop thinking about those hunters filing past me, their bows gleaming in the woods.

I didn’t grow up hunting—I didn’t even draw my first bow until I was 29 years old—but a love of animals and a sense of responsibility for my food that began when I was a college student slowly set me on the path to becoming a hunter. It may come as some surprise to learn that I was a vegetarian for two years. I made that choice out of the frustration of both not knowing where my food came from and my own lack of hunting skills, my fear of shooting any projectile—rifle or bow. But still, I wanted to become responsible for the substance I put on my plate.

I learned to shoot a rifle because I began competing in winter biathlon, a combination of Nordic skiing and shooting. I was excited to think that I could finally hunt. I dove head first into the hunting world. Soon, encouraged by my husband and those hunters in the San Juans, I tried a bow. I was hesitant, however—I worried what would the hunting community think of me? I was a city girl who loved hiking and backpacking, but was always paranoid and anxious about being lost and off-trail and I had only just learned how to shoot a rifle and a bow. I was pleasantly surprised at how misguided  my fears ended up being.

Complete strangers took me under their wing and shared their knowledge gleaned and honed from lifetimes of hunting in the mountains, forests and plains. My mentors and newfound friends taught me how to read the habitat on topographic maps, how to shoot a bow, how elk think, and most importantly, what it means to hunt. For many of the hunters I met and learned from, hunting was much more than a means to get food; it was a way of life and a quiet retreat to reconnect with nature and oneself. Often times someone would tell me, “I don’t know how to explain it, but hunting feels natural. It’s awakening a part of you passed down from generations.” I didn’t understand this until I began preparing and scouting the woods for my first hunting trip.

I had high expectations that my new sense of knowledge coupled with my love of hiking far and high would allow me to scout a large area efficiently—I learned extremely quickly to reset my expectations much, much lower. What looked like a simple path through the woods to an open meadow with a small pond on the topographic map was in actuality covered in impenetrable deadfall. My path constantly changed—instead of deadfall I’d find a cliff or a boulder field or I’d see signs of game that steered me in a different direction. I slowed down. I breathed the forest air. I looked around.

Slowly, I felt my senses opening. I explored the woods as a hunter. Soon, I began stopping to observe everything—the trees, ground, vegetation, access to water, potential shelters. What would take me an hour to hike on an established trail took me several hours to observe and traverse. As I studied the terrain around me, I wandered—letting my senses and knowledge guide me—but I was never lost.

Soon enough, my first hunting trip arrived. Excitement and adrenaline kept me awake the night before opening day for Colorado bow season. I found myself waiting and sitting in the car on Rabbit’s Ear Pass at 2 a.m., looking at the planetarium of stars. I didn’t see an elk or deer my first time hunting, but I will never forget the feeling of stepping into the darkness of the woods with a bow strapped to my back and the silent stillness of the night and the crisp mountain air.

I found a spot to sit in silence for an hour as I waited for legal shooting light.  I thought of those hunters in Chicago basin, thanking them for inspiring me and feeling a small kinship while I waited. After I watched the stars slowly fade away, the sky lit up and I heard sounds of rustling critters. I nocked my first arrow with a soft click. Finally, I felt at home in the woods.