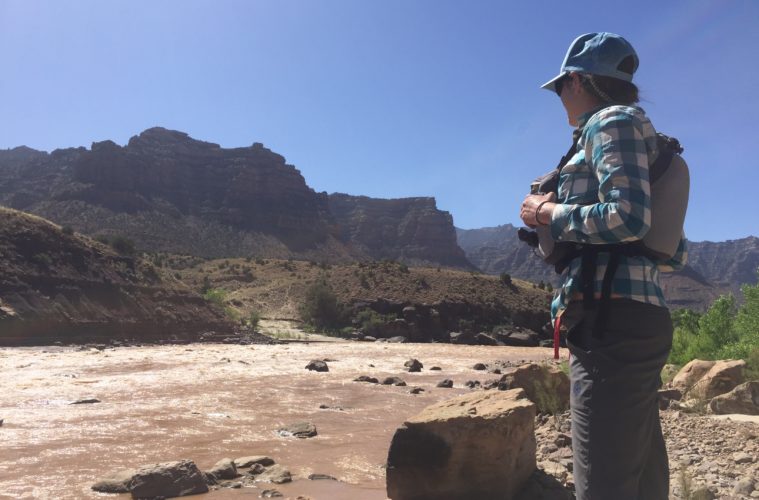 Alone in the Flow

A SOLO TRIP DOWN THE GREEN RIVER TURNS INTO A BIG GAMBLE WHEN A WOMAN SEEKS TO NAVIGATE RAPIDS AND IMMERSE HERSELF INTO A DEEPER UNDERSTANDING OF THE ISSUES OF WATER IN THE DRY WEST.

ed Creek, the biggest rapid in the fish-choked section of the Green River that some folks call the rude, churning surprise around a bend in the river. The blood-colored canyon bows and twists. The water roils, compressing into the corner. From above, all I can hear is the thunder of whitewater.

I knew this was coming—sort of. The day before, I’d stopped at Trout Creek Flies, a fly shop in the dam-side town of Dutch John, on the way down to the boat ramp to get some beta about the river. Steve Habovstak, the manager, who looked like he’d just drifted in from Baja in his flip-flops and deeply unbuttoned shirt, told me that the river was up. A fishing guide had lost his boat in the rapid earlier that week. It caught an edge, swamped, and disappeared below the surface. A whole drift boat, gone. Habovstak said they figured they’d find it when the water went down, but until then there was nothing they could do.

I can’t shake that image of a boat being pinned and sucked under as I pull over on the river’s left side to scout.

Plenty of fishing boats run the mellower, seven-mile stretch just upstream of here, right below the Flaming Gorge Dam, because the cool, clear, dam-released flows are prime habitat for trout. But once you get farther downstream, the river’s natural silt starts to creep back in and the fishing tapers off. This morning on the boat ramp, there had been plenty of commercial trips launching, but they’d pulled off the river at the first takeout. I headed deeper into the canyon alone. Now at the lip of the whitewater, I’m suddenly hyper-aware that no one really knows where I am, and I have no clue when the next boat might be coming through.

By looking at the river itself, and talking to water users along the way, I figured I could start to understand the state of scarcity and risk. Doing it alone felt like the clearest distillation of that mission.

I am alone of my own, potentially stupid, accord. I had decided to paddle the length of the Green River to try to better understand water, and the way we use it in the increasingly hotter, drier, more crowded West. Two weeks ago, I launched my pack raft from the Wind River Range’s Green River Lakes, in Wyoming—bow pointed, eventually, toward Canyonlands, where the Green runs into the Colorado River.

I had decided that the best way to understand the risk of future supply and demand was the best way I know to figure out a lot of things—from the river. By looking at the river itself, and talking to water users along the way, I figured I could start to understand the state of scarcity and risk. Doing it alone felt like the clearest distillation of that mission. But all of a sudden my metaphorical quest to figure out resource peril is palmsweatingly real. I’m so nervous I can’t take in a full breath.

There aren’t many slow-water eddies to catch because the river is raging up over its banks, and I can’t see anything downstream past the spray of white water, so I jam the boat into a sandbar above the tamarisk tangle, where warm, ochre-colored Red Creek runs into the river. I jump out quickly, dragging my packraft up the bank. The tamarisk, a knotty-rooted invasive, which is almost impossible to move through, makes it hard for me to scout. I stumble, sweating, through the bramble, trying to get a look at the rapid. Fine-grained sediment from the creek forms a sandy island between it and the shore.

Since I can’t get above the rapid, I try to get next to it—but when I try to cross over to the sandbar to get a look, I am immediately crotch-deep in moving water. I grab at tamarisk stalks to try to keep vertical, very, very aware of the peril of foot entrapment. The first thing they teach you in baby raft guide training is, “Don’t stand up in the river,” and with that in mind, I flash through all the ways I could die here, sucked under, stupid and rash, knowing much better.

I shimmy myself back up the shore, but the banks are so thick that I can’t see anything without getting into places where I think I might get trapped. I don’t know what to do. I have no one to ask for advice. All I know is that there’s an unseeable rapid big enough to swamp a boat right there, and I have to get downstream. There is no other way out of the canyon.

I clamber back to the top of the bank, sweating and scratched up, and decide to portage around the rapid, despite the nettles and brush that choke the banks. It seems sloggier but safer. But, as I wallow back up, hot and frustrated, I second-guess myself, and change my mind. 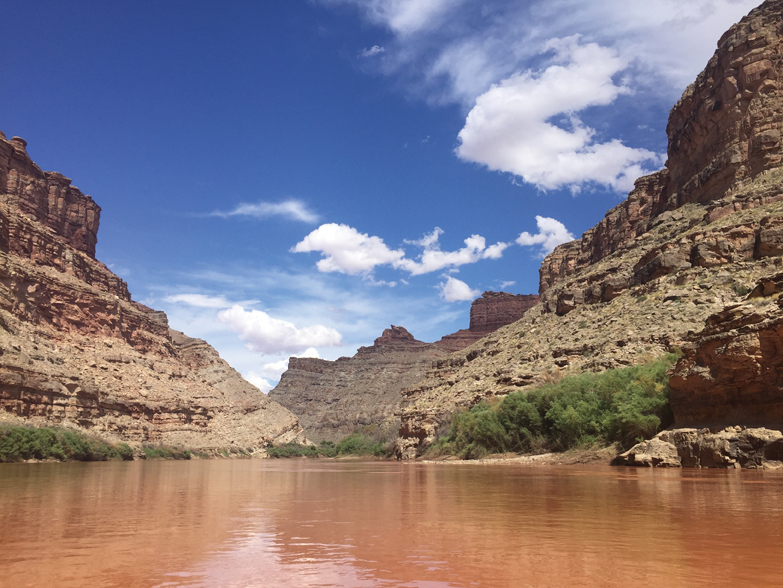 The Story of the West
Along its course from Wyoming’s glaciated Wind Rivers to Utah’s red rock desert, the Green River supplies water to 33 million people—Hansman wanted to immerse herself in the culture of this precious but endangered resource.

I convince myself that I can sneak my boat through the narrow tamarisk-choked channel between the island and the rapid. Yes, it looks like it might be skinnier than my boat in some places, but I’m exhausted and low on judgment, so I tell myself it will be less work than walking around, and less dangerous than running the un-scoutable gut of the rapid. No option feels good.

I push off and sneak through the boat-wide gap next to the island, scraping the bottom of the river. It’s just as narrow as I feared, and the boat drags and catches. The river picks up speed, pushing against the rail of the raft. It presses me into the tamarisk, making every movement frantic. My paddle tangles in the reeds, yanking on my shoulder, spinning me off line.

I ’d like to say I thought about consequences, and worked through my decisions logically and carefully, but really I gambled. I tried to make the best choice I could with what little information I had. I tried not to second-guess myself, even though I knew my decision-making was full of holes. But I made it.

And that experience epitomizes the biggest thing I learned on my whole trip downriver: Almost everyone who manages water, from ranchers to raft guides, is trying to make the best possible choices based on a sketchy, unseen, ever-changing future. And they are all trying to protect themselves against the potential of incoming disasters. Water management is like risk management, like river running. You can scout and try to predict where the water is going to push you, but you don’t know what’s actually going to happen until you’re in it. Fear can help, but it can cloud your decision making, too.

When I reach the end of Red Creek I have to pull myself free from an arm of tamarisk, but then I’m flushed out, back in the main channel. I’m upright, paddle in hand, but by the time I catch my breath, the river has bent again. I can barely see the whitewater from downstream. I have no idea if my choices were good or not, but here I am, moving forward. 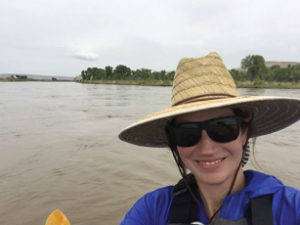 HANSMAN, PICTURED HERE SCOUTING RAPIDS IN DESOLATION CANYON, UNDERTOOK THE ENTIRE 730 MILES OF THE GREEN RIVER ON HER OWN.

—HEATHER HANSMAN IS THE AUTHOR OF DOWNRIVER: INTO THE FUTURE OF WATER IN THE WEST, A CHRONICLE OF HER 730-MILE SOLO TRIP DOWN THE ENTIRETY OF THE GREEN RIVER AND THE PEOPLE SHE MEETS ALONG THE WAY WHO RELY ON ITS WATER.