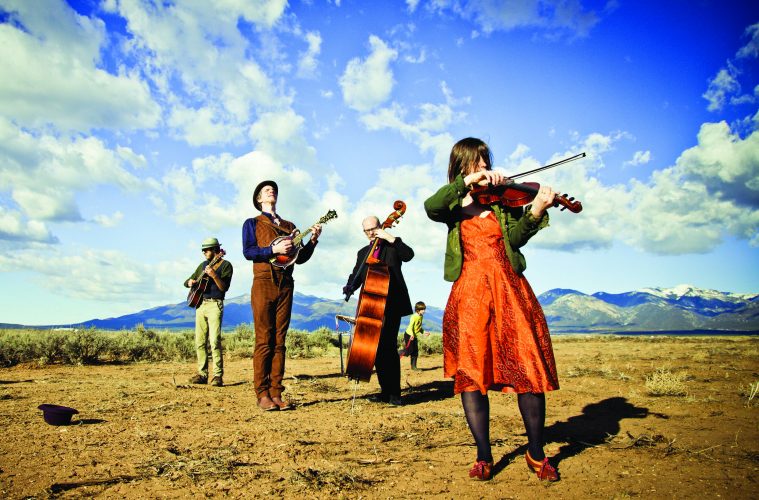 In the chorus of the optimistic, up-tempo newgrass tune “Sun and Rain,” a standout from Taarka’s new album “Fading Mystery,” mandolin player David Tiller and five-string violinist Enion Pelta-Tiller harmonize: “Don’t try so hard and it won’t get harder.” The song is an anthem of resilience, which the married couple and leaders of the eclectic string band know something about. Back in 2013, the Lyons residents lost their house during the flood of the St. Vrain River that turned the sleepy town into a national disaster area.

In the aftermath of dealing with the loss and uncertainty about where they would ultimately live, the Taarka couple found solace in making new music. They loaded up salvaged instruments from their waterlogged home studio and retreated to David’s family house on Virginia’s Eastern Shore. And just months after being forced to evacuate, they recorded the songs that would become the 2015 album “Making Tracks Home.”

It’s a therapeutic album with some direct responses to their experience, including the Delta throwback “River’s Eddy Blues.” Focused around this comfortable recording space, the trip to Virginia has become annual; hence the quick follow-up. This year’s “Fading Mystery” is a concise 10-track effort that summarizes Taarka’s evolution as a skilled and versatile string outfit. The new album blends nimble-fingered acoustic exploration with well-crafted songs highlighted by thought-provoking lyrics.

David and Enion met in 2001 at a shared gig in New York City and soon after bonded over a love of acoustic music from around the world: Celtic traditionals, the gypsy jazz of Django Reinhardt and Stephane Grappelli and the stylistically inclusive work of quick-picking masters like David Grisman. The couple initially swirled these influences as an instrumental duo but eventually decided to expand their reach by adding band members and finding their singing voices.

“When we first got together, you wouldn’t have wanted to hear us sing,” David jokes. “We have a love for all of these world music styles and at first we were really focused on our instruments. When we decided it was time to try singing, it wasn’t great. We had to work on it. As we started writing songs and our voices got better, we saw a larger variety in our audience.”

That effort can be heard on some of the most engaging tracks from the new record, the band’s seventh, just released in March. David’s “Polyamorous Polly Ann” is a pastoral story song with fanciful, Beatles-esque lyrics about feelings for an old lover, even after moving on to another. Enion conjures the raw emotion of Joni Mitchell in the driving folk-rock of “Athena,” and shares the heartbreak of losing a family member, in the title track, a mystical ballad about her late brother.

“Enion writes dreamy songs. They’re like landscape paintings of her experiences,” says David. “My songs tend to be more story-like. I’ll start with a theme and take notes as I think of things. When I eventually sit down to actually write a song, I work with those scraps of ideas and it often goes in a completely different direction.”

Even with more focus on lyrics, deft instrumental composition is still very much part of Taarka’s equation. “Fading Mystery” contains three instrumentals, including the Latin-inspired “Retreat” and the speedy, progressive bluegrass odyssey “Finn McCool Crosses the Rocky Mountains.” The latter features tight string interplay between David, Enion and guitarist Mike Robinson, who joined the band three years ago. Bassist Troy Robey, who has been with the band since 2008, rounds out the quartet.

With the new album released last month, the group’s focus now turns to touring. David says the band—which has played with the likes of Darol Anger, Peter Rowan and Yonder Mountain String Band, and found favor in the worlds of both indie folk and jamgrass—will have a big presence on the summer festival circuit. First up, though, is a Front Range show at the Caribou Room in Nederland with We Dream Dawn on April 14.

As far as home life goes, David and Enion are settled in Lyons again. The couple purchased a new house last winter and they have another studio in the works. “I am in the process of building it at this moment,” David says. More music is on the way.

If you want to download “Fading Mystery” and find updated tour information, head to taarka.com.