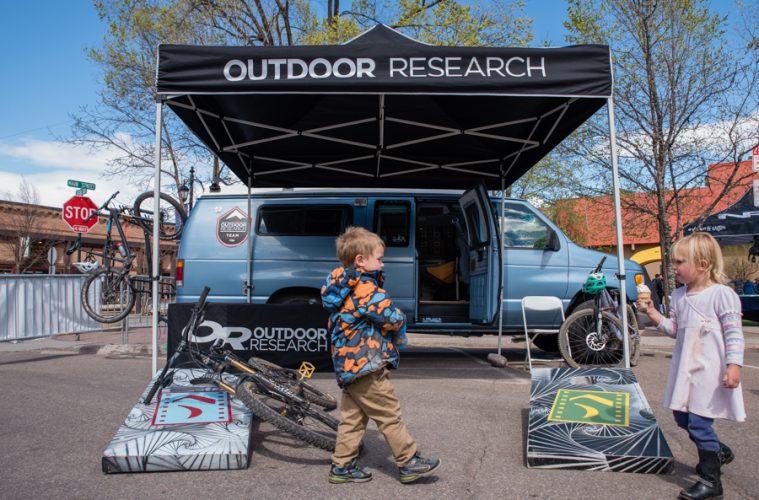 One of North America’s leading adventure film events—5Point Adventure Film Festival—held its 10th anniversary running last month, once again proving that tiny Carbondale, Colorado, is on the mountain-town map in a big way.

The sell-out flagship festival, founded in 2008 by Julie Kennedy, former owner of Climbing Magazine, and Yvon Chouinard, founder of Patagonia, delivered audiences an immersion in real-life, big-screen adventure with a compelling program of more than 60 short films, panel discussions, community events, parties and more during the four-day event. The festival kicked off with its signature Van Life Rally—a celebration of outdoor living and dirt bag culture with live music, food and drink. New features included community-focused activations across Carbondale, daytime events and an expanded schedule with two new film programs on Saturday and Sunday afternoons, which celebrated the best films of 5Point’s past ten years.

5Point is a non-profit organization with a mission to “ignite personal and communal adventure of all kinds through the experience of sharing meaningful stories.” Organizers deliver a unique experience by combining passionate athletes, artists, filmmakers, documentary films and local communities. World premieres at 5Point included several highly anticipated releases. One of our absolute favorites was The Frozen Road , documenting 22-year-old British university student Ben Page as he sought an adventure of perfect solitude. The Frozen Road is an honest reflection on his solo trip through the unforgiving emptiness of one of the world’s last great wildernesses in the Canadian Arctic. In Above the Fray, filmmaker Graham Zimmerman profiled climber Beth Rodden, one of the great climbers in recent history, as she reflected on a terrifying expedition in Kyrgyzstan and how motherhood has helped her discover a balanced life. Another local favorite was Chocolate Spokes , Brendan Leonard’s documentary of how Gregory Crinchlow left his architecture job in 2011 to start a bicycle shop in Five Points, a traditionally African American and Latino neighborhood in Denver. He now services the bike maintenance needs of a changing, underserved community and creates custom bikes.

Students from Colorado Mountain College’s Isaacson School for New Media interned and volunteered with this year’s 10th anniversary festival, their third year in this collaborative role. On site, students captured dynamic still imagery of the events surrounding the festival—360-degree photos of the Van Life rally, art exhibition at the Carbondale Launchpad, panel discussions and the daily film programs.

“I got a ton of hands on experience with the orchestration of a film festival–from the process of film selection to reaching out to directors and producers to getting permits from the town for street coverage… all the little intangibles that go into such a large event,” said Outing.

Beyond their involvement as volunteers, a student film crew of four—Ben Hunter, Danny Feria, Thang Khan Sian Khai and Rachel Mayoral—succeeded in placing their film “Big Air Max” into Sunday’s Film Program IV: Changemakers. Several members of the team were volunteers at last year’s 5Point festival and were so inspired by the films, they set out to make their own.

“The fact that we were able to bring back a film one year later was incredible,” said Mayoral. “It felt surreal to be up there on the big screen with these filmmakers that have been coming to the festival year after year.” “5Point has allowed me to experience the world through a different lens,” said Leici Hendrix, left, “one where people come together and have a shared experience that bonds them through inspiration and storytelling. I walk away feeling like I’m not a stranger to anyone in the theater. We’ve just been on an incredible journey together and there’s a lot to talk about.”

The four-day festival also included a myriad of special guests with filmmakers, industry personalities, friends and faces of 5Point including Wade Newsom, Brendan Leonard, Travis Rummel, Jeremy Collins and Krystle Wright. New guests included Katie Lee, a flamboyant of knights among a growing legion of pro-wilderness activists; and the USA Men’s Rafting Team—including two Roaring Fork Valley locals—who set their sights on making history by attempting to break a legendary speed record down 277 miles of the Colorado River through the Grand Canyon.

Over the last five years, 5Point has supported more than 15 film projects, many of which have gone on to win awards and tour in festivals and theaters all over the world. 5Point connects artists and filmmakers with opportunities to showcase their work, with outdoor industry funding, and to a network of creatives to form meaningful collaborations, a kind of support which is essential in finding, telling and sharing inspiring stories.

5Point’s Dream Project is a unique program that offers outstanding high school students from Colorado’s Roaring Fork Valley the chance to explore their own personal boundaries and dreams. The five students that best exemplify 5Point’s five guiding principles receive a $1500 scholarship to embark on a life-changing opportunity and follow their passions. Visit the 5Point website to submit an application for next year or find  more information.

The 5Point big screen takes you off of the computer and into a giant viewing hall where everyone watches the same films together every night in an atmospheric experience and emotional roller coaster. Many of the filmmakers and oftentimes the actual subjects of their films are on hand to talk and party with attendees.

Every day during the festival attendees are out climbing, biking, fishing, hiking and doing river cleanups and other community projects as life imitates art before heading into the theater each evening. The values of the festival are poignant and contagious and we carry their message every day in our own lives of adventure.