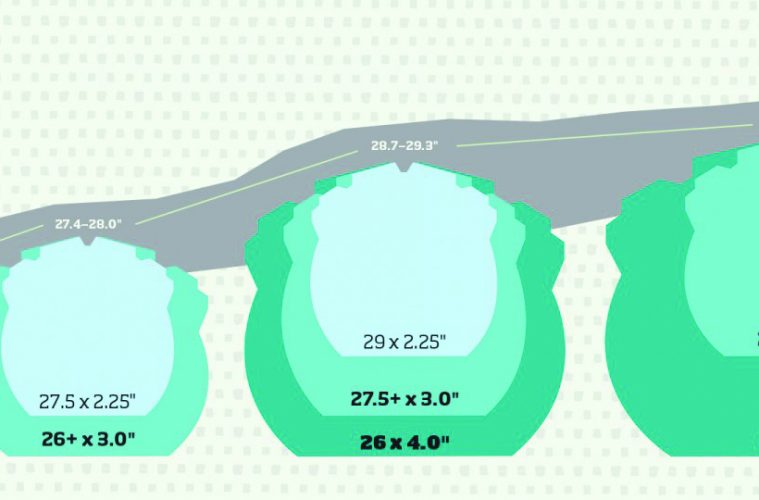 Size Matters: See how your tire width stacks up.

You’re not going to learn anything reading an article about tire widths.

That’s the tongue-in-cheek message from Steve Heal, Director of Operations at Golden’s Wheat Ridge Cyclery. The shop is massive, with 100 bikes in its demo fleet, and it’s the largest Yeti dealer in the nation. What Heal means is that the only way to really understand the difference between a bike with 27.5-inch rubber versus a bike running 27.5+ rubber, is to ride both. “People get an idea in their heads and the more they read online forums, the more confused they get. Just go ride and decide for yourself,” says Heal.

Fair enough, but the lowdown on 27.5+ is important to understand before you make any decisions. This new-ish tire size is typically 2.8-inches wide, and splits the difference between four-inches-or greater fatbike tire widths and “normal” mountain bike tire widths of 2.2-2.4 inches.

The reason to consider a 27.5+ width is that it offers some of the leverage advantages of a 29er in smaller wheel size. Huh?

We’ll explain. Wheels act a lot like rolling pry bars. The longer the contact patch, the more leverage you have to clear an obstacle, like a log or a rock. Twenty-niners offer that longer patch, so they roll over trickier terrain that can stall bikes with 26-inch tires.

But 29ers typically ride higher, so shorter riders can feel a lack of control at slow speeds, and those tall wheels are hard to make stiff, so they can feel noodle-y when you’re ripping. Also, 29ers can be very l-o-n-g, which gets tough for weaving through tight switchbacks. Splitting the difference with 27.5 wheels has helped, but 27.5+ tires further fatten the contact patch, giving less experienced cyclists, “a ton of confidence,” says Travis Mosbar, Service Manager for Pro Velo in Ft. Collins, Colorado. Mosbar says the local trails are super rocky, the kind that scare a lot of mountain bikers. The 27.5+ has been catching on with Fort Collins shredders because, “There’s traction galore, so they just make people really confident.”

The downside of 27.5+ tires is more mass and rolling resistance. You’re going to be a slower climber, so Mosbar and Heal both recommend shedding weight by running your plus bike with tubeless tires. “Tubes on these bikes add more than a pound of rolling mass,” says Heal, and going tubeless also lets you run ultra-low pressure (a la fat bikes) for even more traction, he says.

Both Mosbar and Heal say some riders are also eyeing 27.5+ tires for their one-bike-quiver potential, because some rigs, like Giant’s XTC Advanced 27.5+ 1 and Santa Cruz’s Hightower, allow hot-swapping to 29er wheels. You’ll get a machine that can run skinnier, 29er tires when you’re climbing all day, or revert to 27.5+ for ultra-techy terrain. Or you can confuse matters even more with bikes like Yeti’s SB5+, designed specifically around 27.5+ tires. All the better, argues Yeti, to rail the most rugged singletrack at the lightest possible weight.