It’s time to praise the stuff that makes our winters even better.

Twice each year we hand out these coveted Peak Gear Awards to the very best gear we put to the test in the field. How do we determine the winners? Simple. We ask our top contributors—who, we are proud to admit, spend far more time skiing, riding, skinning, biking, climbing and exploring than they do “working”—to name the best gear they used over the past year. What products made your adventures better? What gear can’t you live without? What gear changed your life?

Why they Won: These stretchy Swedish touring trousers can take a beating out on the trail and work as ski pants, too, with hems that adjust to accommodate ski boots and zipper venting for when you work up some steam. Plus, they’re made from enviro-friendly recycled polyester and organic cotton. Men’s and women’s.

Where We Took them: Everywhere from the Arctic mountains of Fjällräven’s home country in Lapland to the snowy streets of Boulder

Why It Won: This is the “Ueli boot,” a boot designed/conceived by Ueli Steck before his untimely death. Light, climbable, insulated, positive in crampons, workable on rock, and providing all the feeling of a mountain-running shoe, the Ribelle Tech OD blew us away as soon as we slapped a rigid crampon on it.

Where We Took It: This is our go-to boot in Chamonix. It proved its versatility on the Aiguille d’Entrèves, Cosmiques glacier, and Vallée Blanche.

Why It Won: The Hoji Pro Tour took home a Peak Gear award last winter and our staff was right back on board for this season’s new big-brother version, which has the abilty to work with a frame touring binding like the Marker Duke as well as tech bindings. It only builds on the performance of the original, with the ability to drive with power and precision like no other tech-binding boot on the market thanks to the innovative lock system that pulls together the shell and upper to deliver all the performance of a full-on alpine boot.

Why It Won: The Hovercraft wowed us with its power to punch far beyond its weight—with a squat nose and short length the rockered board motors up the skin track, but it can truly float in the deep stuff when you get it up to speed. It proved quick and agile in tricky terrain and tight trees. Plus, the STD clip system is simple, trustworthy and doesn’t mess with the riding.

Why It Won: This is truly a one-quiver boot—light on the uphill and stiff and responsive on the downhill. It’s incredibly comfortable and can be molded to fit a variety of feet. Weighing far less than an alpine boot, it feels and performs like one on big descents.

Where We Took It: Ski touring in the Tetons, resort skiing at Jackson Hole, ski mountaineering in the Italian and Austrian Alps, skiing off the Aiguille du Midi in Chamonix, hut skiing in Colorado

Why It Won: For such a big ski—115mm underfoot—the Anima is surprisingly nimble thanks to a flex pattern that becomes progressively softer towards the tip and tail of the ski. The former racers among us were able to set these big planks on edge like a GS ski on the groomers. We all enjoyed the big, fat, playful float they provided when we got them in the deep stuff.

Where We Took It: SIA On-Snow Demo test at Copper Mountain, Eldora, Durango, the Front Range and Berthoud Pass touring

Why It Won: At just 22.4 grams, it’s the lightest, most compact harness we’ve ever used. Bonus: It folds flat.

Where We Took It: Long, hard climbs in the Sierra 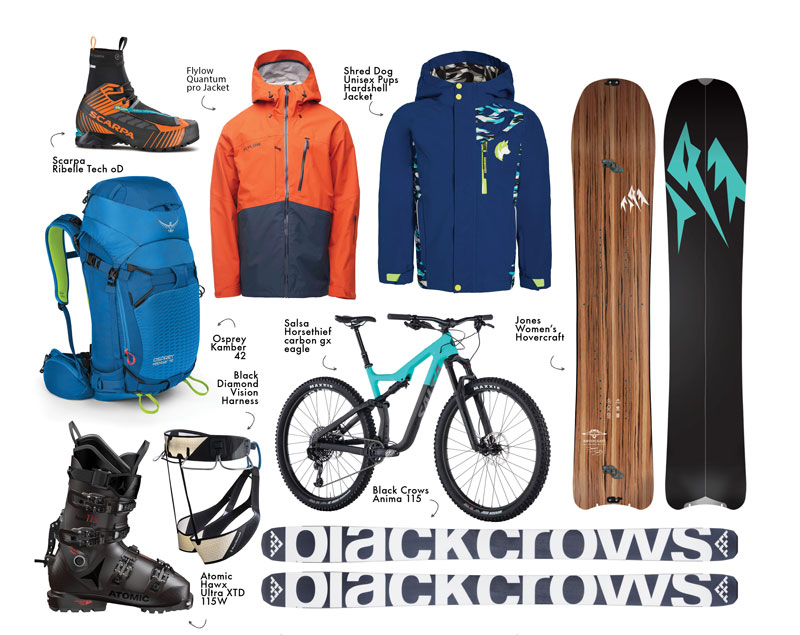 Why It Won: Flylow upped the performance on our longstanding favorite shell with OmniBloq, a new eco-friendly DWR that beads water off the jacket without messing with the membrane, and doesn’t use the earth-degrading chemicals that go into usual DWR.

Where We Took It: A-Basin, Keystone, Taos, the Front Range and Rocky Mountain National Park backcountry

Why It Won: These simple, badass leather gloves feel better the more you wear them. “I gave my first pair up to a driver in Afghanistan,” says our tester who was filming there. “He coveted these mugs. And Afghans are some of the toughest people living in the most rugged climate—they know durability and gear.”

Where We Took It: Afghanistan, Jackson Hole, Utah

Why It Won: This do-it-all pack handled everything from lift-accessed backcountry to two-day snow-camping trips, accommodating snacks, puffies, water bladder and standing up to sharp objects (think: axes and crampons). But smart, functional details like a hip belt that accommodates a set of touring gloves and an insulated hydration-hose sleeve really sealed the deal.

Where We Took It: Various peaks, chutes and choss piles in the Sierra Nevada, Cascades and Rockies

Why It Won: This lightweight, comfortable piece—didn’t smell after eight days of daily use. It dries in a hurry and keeps you warm when you’re descending but doesn’t overheat when you’re working hard. Plus, it looks like a normal shirt when you have to do laundry and only have base layers to wear while you wait.

Where We Took It: Bikepacking 550 miles of gravel from Washington, D.C. to Damascus, Virginia

Why It Won: Moment is one of the most innovative ski brands in the U.S. but no one has heard of them—yet. They don’t do any marketing beyond putting guides and other hardcore skiers out on the product. The Deathwish is the most forgiving and versatile ski we have ever hopped on. It crushes crud, bashes bumps, smears pow with aplomb and makes a perfect Tele ski.

Why It Won: This jacket is the ideal choice to keep little shredders warm and dry (thus, happy!). The Boulder-based direct-to-consumer brand also works to keep the cost of quality kids’ snow gear down, thanks in part to a two-way size adjustment allows the jacket to grow with one kid and shorten back down for the younger sibling.

Where We Took It: Eldora, Steamboat, Breckenridge

Why It Won: With a Split Pivot suspension design featuring 140mm of front travel and 120 mm in the rear, this incredibly versatile 29-inch-wheel trail bike felt at home on a wide variety of trails–and the long-travel ride really proved its mettle on rocky, technical terrain.

Where We Took It: We rode it all over Colorado, Utah and California—but we gave it lots of time on its namesake trail, and one of our favorite rides anywhere, Fruita’s Horsethief Bench.