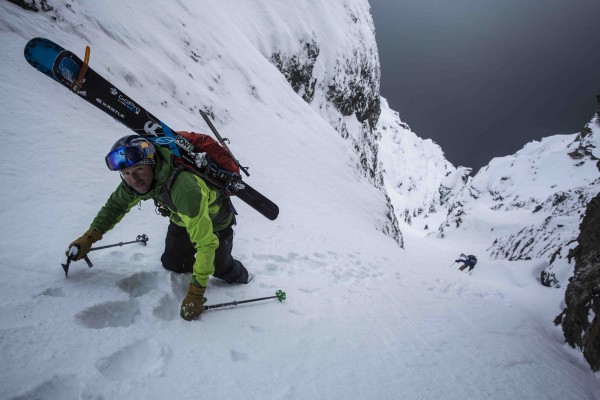 Colorado is full of outdoor athletes who push the idea of what’ticky possible. They shine on every stage from the Olympics to YouTube. But who rises above the pack? Who are Colorado’s Best Mountain Athletes? We wanted our readers to answer that question. So we asked our contributors to nominate the state’s top athletes. We then went through the tough process of narrowing down those choices to the three best male and three best female athletes in five disciplines. When it comes to mountain sports in Colorado women and men play together so we let them compete against each other. Then we put them out there for a month and let readers, vote for the winners. So here they are, the top mountain athletes in Colorado. Big Achievements: One of the preeminent ski mountaineers on the planet, Dav made his big claim to fame when he became the first person to ski all Colorado’s 14ers in less than a calendar year. Now, he’s five mountains away from skiing the Centennial Peaks, the state’s 100 highest summits. A seven-part Red Bull video special, “The Faces of Dav.” is currently documenting all the different aspects of his personality. When we asked him what he thought his biggest achivement was in this larger-than-life career, he went stright to the top of the planet: “The turns Colorado native Neal Beidleman and I made on the Lhotse Face of Mt. Everest really stand out,” he says, “and the summit a week later was the icing on that big cake! But most of all, it’s being able to maintain a solid career as an athlete while raising a family of three boys. That’s my greatest achievement.” Big Achievements: This category saw the closest voting and a big victory for Alex who just beat out the legendary Tommy Caldwell to win. No surprise though, Puccio has won the American Bouldering Series eight times and finished second at the 2014  World Boulder Championships in Munich. So what does she see as her biggest feat? “This year has been my best year yet on rock. I have had a lot of great moments and surprising accomplishments,” she says. “If I had to pick one, it was when I climbed Jade (V14/8B+) in Rocky Mountain National Park this past summer,” she says. “I climbed it so much quicker than I though I would and realized I can do more than I thought. I realized my body was already at that level for a while and that I just needed my head to be on the same page.” Big Achievements: Stevie Kremer is a true mountain endurance athlete, winning the 2014 Matterhorn Ultraks Skyrace and Sierre-Zinal Mountain Race in Switzerland and winning the 2013 Marathon du Mont Blanc. So who inspires such a beast on the trail? “All female athletes who compete with a positive, happy attitude and don’t let the outcome of the race affect their whole day and are confident no matter what,” she quips. She’s also a top national ski mountaineeering racer, finishing third at the North American Championships in 2012. “There are some strong girls in Colorado!” she says. Big Achievements: When we first profiled Tejay in Elevation Outdoors in 2011, we called him the “Kid Who Could Be King.” Were we ever right. In 2014, he won his second straight USA Pro Challenge here in Colorado, adding to his victory at the World Team Time Trail Championships, a fifth place finish in the Tour de France and a 2013 win of the Tour of California. He is favored to win the Pro Challenge again this year. “My ultimate goal is to win the Tour de France,” he told us. “And when my cycling life is over, I want to devote more time to skiing. It’s a little embarrassing living in Aspen and being a very mediocre skier.” Big Achievements: Jenny MacArthur shines in a the up-and-coming paddling discipline of downriver SUP. Born in Australia and married to paddling savant Charlie MacArthur who owns Aspen Kayak and SUP, Jenny has won SUP Downriver and Paddle Cross events at the Vail Mountain Games, Fibark, CKS Paddlefest and the National Whitewater Stand Up Paddle Championships. In 2012 and 2013, she was crowned SUP Whitewater National Champion. “I’m most proud of stand up paddling the Grand Canyon,” she says. The sport is till very new so it’s great to be competing against women half my age and inspiring more women to get out and enjoy stand up paddling.”

SO… WHO IS THE ULTIMATE COLORADO MOUNTAIN ATHLETE?

We have five finalists in five different disciplines. Next, we pit the five off them off against each other to determine who gets bragging rights for the whole state. VOTE HERE NOW It was not easy to narrow the fields down in each sport category when we were looking for the best mountain athletes in the state, so our list was sure to miss some important names. We also noticed, sadly, that the list was not very diverse, which shows that outdoor sports in Colorado still need to grow to look more like the country as a whole. So who else should have made the list?

The first name to come up was world champion triathlete Mirinda Carfrae. And how could we complain about a lack of diversity and leave off nine-time national champion Joe Gray, a Colorado Springs resident and the first African American to win a national mountain running title? We also missed endurance machine and ski mountaineer Sari Anderson and climbing beast Steve House. It was hard to leave Colorado icons like six-time Leadville bike champ Dave Wiens and blind athlete Erik Weinhenmayer off a list of Colorado’s best. We also wished we could have had a place for Fort Collins’ mountaineer Alan Arnette and part-time Boulder resident Pasang Lhamu Sherpa Akita both of whom summited K2 this season. And let’s not forget paralympic world champ Maureen Beck.