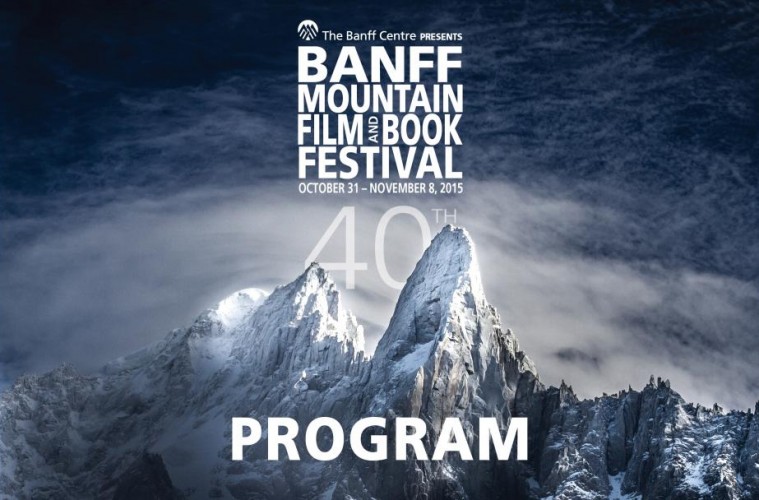 The beginning of the year inspires all of us to be the best version of ourselves because everyone on the Front Range is psyched on training and planning adventures for the year ahead. However, it’s also the coldest, darkest time of year, making it pretty tempting to hide under a pile of down jackets, go on an all-carb diet and hibernate until Chacos season. Well, I’m here to encourage that. Because what’s the next best thing than going on adventures? Eating tasty snacks in a cozy theater while binge watching other people suffer in exotic locations!

The 40th annual Banff Mountain Film Festival is on now at the Paramount Theater (February 25 and 27). Tickets are $22 and available online. The proceeds from the shows will go to the Colorado Mountain Club.

To keep the stoke level high, I reviewed some of the most inspirational, educational and visually-stunning adventure films that caught my attention in 2015, most of which you can look forward to at Banff. I am disappointed to note that very few of the movies were directed by women, which is a reminder that there aren’t enough women creating films at every level and branch of the art. Nonetheless, some of the most talented athletes and directors working right now are women, so hopefully the film festival circuit will reflect that in 2016.

Okay, we can all agree that this film had a MOMENT in 2015. Everyone knows how movies starring dogs typically end, but I promise that this story is well-worth the subsequent heartache (and possible existential crisis). Not only did it go viral and amass more than 12.5 million views on Vimeo, but it basically broke the internet. Seriously, people were like, “Who is Cecil the lion? OMG have you seen Denali?!” I first noticed it in the line-up with Meru on the opening night of Telluride Mountainfilm, so I figured Denali was just another short about some white dudes almost dying on a mountain. Eight minutes later, I’m sobbing in a dark theater along with hundreds of other strangers that just want to go home and hug their dogs. All of it – the humor, vulnerability, cinematography and soundtrack – was perfectly crafted to inspire and make you feel all the feelings. Ben Knight and Ben Moon, if you guys are reading this, thank you for existing.

Anyone can make climbing porn, but finding new and exciting ways to keep climbing stories interesting is the foundation of REEL Rock’s international success. In February 2014, Caldwell and Honnold traversed the Cerro Fitz Roy skyline, one of the greatest mountaineering accomplishments in recent history. This footage was highly-anticipated, mostly because they made us wait a year and a half, but it did not disappoint. They basically just gave Caldwell and Honnold a camera and were like, okay go do your thing, don’t die, byeee! The result? A 40-minute documentary filled with action, laughter and some pretty sweet graphics that help define the epicness of their journey. You also get to see Tommy eat dinner with a broken sunglasses and Honnold face fatal danger with a healthy dose of sarcasm.

Metanoia is an inspiring life story about Jeff Lowe, the father of modern ice climbing. Lowe was a visionary climber who has put up first ascents across the planet, invented the grading system used worldwide for ice and mixed climbs, brought the first Sport Climbing Championships to America and opened the ice park in Ouray, Colorado. Now, at 63, he is confined to a wheelchair with a degenerative disease similar to ALS. Lowe had always used climbing as a means to understanding himself, his relationships and the world around him, and he approaches his health problems in a similar manner. Both have forced him to challenge his perceived boundaries with an adventurous spirit as he embarks into the unknown. This isn’t just about climbing history, it’s about triumph and heartbreak along the personal journey of an alpine god.

This film profiles Mina Leslie-Wujasty, an internationally renowned boulderer and all-around badass, as she makes her way through the 2013 competition climbing season. Randall takes us through a compelling narrative that eschews the conventional climbing movie formula. Instead of a highlight reel of Mina’s hardest sends, she focuses on Mina’s intense dedication, vulnerabilities and what it takes to turn a passion for climbing into a full-blown career.

55 Hours to Mexico
Directed by Joey Schulser and Thomas Woodson

Is it possible for your average nine-to-fiver to pack the adventure of a lifetime in a single weekend? Yes! All you need is a decent level of physical fitness and a trio of rowdy twenty-somethings to keep you laughing through the pain. In 55 Hours to Mexico, a group of friends set out to climb and ski Pico de Orizaba, the third-highest peak in North America. This short is the ultimate tribute to the weekend warrior. It’ll force you to ask life’s tough questions, like “what’s the raddest thing I could do in 55 hours?” and “why doesn’t Google Maps exist in Mexico?”

55 Hours in Mexico from Joey Schusler on Vimeo.

When Forest Woodward was born, his father wrote a poem for him about the secret places of sublime beauty that he would find in life. “May you always remember the path that leads back, back to the important places,” it concluded. Nearly three decades later, Forest came across the poem in a box of family books and was propelled by the words to challenge his father to recreate a 1970 trip down the Grand Canyon. Together they set off on a 28-day journey down the Colorado River, where, surrounded by towering canyon walls and powerful whitewater, Forest watches his father “not just alive, but living again.” This poignant short about the father-son bond teaches us that although we may sometimes go astray — stuck in eddies and in life — the path back to the important places is never too far away.

THE IMPORTANT PLACES. from gnarly bay on Vimeo.

Frank and the Tower
Directed by Brendan Leonard and Fitz Cahall

For long-time climbing guide Frank Sanders, a life well lived means perseverance, community and dedicating your life to something outside of yourself. Sanders found himself at Devil’s Tower National Monument in the early 70’s and has climbed the tower more than 2000 times since. This film paints a portrait of a humble man who overcame his demons (he talks about spending 33 straight days intoxicated) and ultimately became the monument’s most well-known, eccentric, louder-than-life personality.

Frank and the Tower from REI on Vimeo.