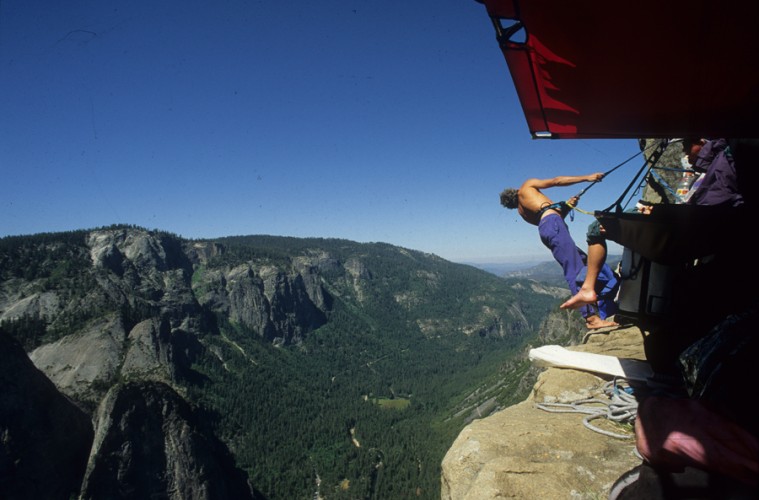 Yosemite and the Coz

Kurt Smith says goodbye to Scott Cosgrove and remembers the halcyon days of climbing in Yosemite in the 1980s with a partner and friend. By Kurt Smith.

A lot has been written about Scott Cosgrove in the week since he has passed. Big wall climber, badass free climber, professional climbing guide, rigger in the movie industry, academy award winner. Scott was a guy with a big heart and a strong opinion. He was never afraid to stir the pot with a heated discussion or screaming match in the Mountain Room Bar, and then tie into the cord with you the next morning as if nothing had happened the night before. He was focused and had a big ego, just like myself, and he wanted to climb and leave his mark, on the rocks and off. We made a good team while climbing and bouldering and had more than a few knock down drag out arguments. But we always had the mutual respect for each other to never hold a grudge, and move onto the next climb or discussion. That’s what friends do.

As with all things in life, the story is one that changes over time, as we grow older and wiser.

I grew up climbing with Scott and a handful of the stone masters in Yosemite during the 1980’s. This was the end of the “golden age” of Yosemite free climbing and Scott and I had our own vision of what that meant, and we really wanted to carry that torch with pride. We were the same age and yet so different. He was very tall and skinny, with really strong fingers and great footwork. I was short and lean, never afraid to go for it and full of energy to climb. We were both competitive with each other but also encouraging. That competitive nature came out when we would climb and we were always gunning for some of the same routes and repeats. Scott was from the Bay Area and I was from Tahoe, so we had that rivalry to throw around. I was a Raiders fan and Scott a Niners fan. We were always willing to talk politics and the changing state of climbing.

Climbing with Scott was always an adventure and was usually followed by beers and heated discussions about the state of climbing, politics and life. Our first big climb together was Space Babble in 1984. It’s a bold route first done by Ron Kauk and Kevin Worrall in 1976. It’s located on Middle Cathedral and had built up a reputation of being very committing with only six lead bolts for seven pitches—a pure old-school horror show and one route that we needed to do together to build our street cred. We made plans and soon found our self at the base one crisp spring morning.

We flipped a coin for the first pitch, which is the crux at 5.11 and has two bolts and some marginal gear to protect it. Scott won the toss and set off into the unknown. He danced and sketched his way up the rock, confident and committed, while I nervously held the rope and waited for my turn. The pre-route jitters disappeared as soon as I followed and got to the belay. “Nice lead Coz,” I told him, grabbing the meager rack and eying the second pitch. A few 5.10 pitches with minimal gear and a couple of bolts finally get us to the real crux—the unprotected 5.9 pitch.

Now you would think 5.9 would be no big deal when you climb 5.12 everyday but this is Yosemite. High up on Middle Cathedral is a daunting place to be when you have one more pitch with no gear. This lead was Scott’s, and I could tell he was nervous. “Watch me, Kid” was all he could mutter as he left the belay. After 40 feet he disappeared from my view and I heard mumbles and another “watch me.”

I was scared. I considered untying from the belay but talked myself out of it. If he goes then we both go was my train of thought. I sent my best vibes up the rope, and soon enough he yells “off belay.” I led the last pitch and soon enough we were back on the valley floor and drinking beers in the parking lot. We though we pulled off what was most likely the third ascent and soon we were making plans to go work on Midnight Lighting the next morning, still high from our first adventure together.

Later that summer we spent a lot of time in Tuolumne Meadows, bouldering everyday and hanging out with John Bachar. He was our hero and became our friend and mentor that summer. We would meet him in the parking lot in the morning and follow his lead, be it a highball boulder problem or scary solo. John would set the tone for the day while driving down Tioga pass, in true rally-car form, power sliding through the corners.

In the end we both went on to follow our climbing dreams and would connect again and again for routes big and small. But I will always miss those halcyon days spent in Yosemite, full of piss and vinegar and never wanting to back down from any climb, or discussion. Passion is what makes us all human and Scott had a huge helping of that to share with all of his friends. He will be missed by many and known to a few as a The Coz. I will meet up with you and John on the other side and we will continue that solo circuit and finish our heated discussions.