Sometimes, it is hard to train when it’s raining. But, it isn’t really training until it’s raining, or so some say.

The added weather elements make you dig deeper and work harder than you would on an easy sunny day. And, the inclement weather also restricts your routes of travel, as you must limit your exposure above tree-line, and your ability to get deeper into the backcountry in a safe fashion is comprised. 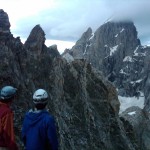 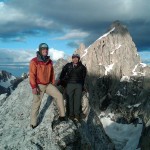 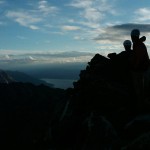 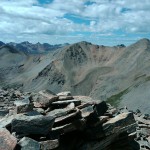 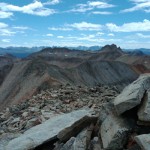 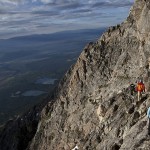 The kind of training that I need right now necessitates long days in the high alpine. When you are threatened by storms, electrical or otherwise, it makes it challenging to get to the higher elevations, achieve the vertical ascent and cover the mileage that make you strong for an expedition in the Himalaya.

In three weeks, my three partners, Mark Fisher, Andy Tankersley, Todd Passey, and I head to Tibet to attempt to climb and ski Shishapangma, the fourteenth highest peak in the world. As one of our many preparation tasks for the trip, we decided to join up for a climbing mission in the Tetons.

Two weeks ago, I drove up to Victor, ID to meet up with the gang. We awoke at midnight to the sound of rainfall steadily hammering the roof of my Mark’s house. Ignoring the obvious, and hoping for a break in the weather, we made coffee, forced down peanut butter and banana sandwiches, and hit the road for Teton National Park.

Our objective for the next twenty-four hours was the Grand Traverse route. It is a serious and technical climb that crosses nine of the mightiest peaks in the range, and includes more than 12,000ft of vertical ascent and descent in fourteen miles.

Ascending trails and scrambling fourth class rock in the drizzle of a 3am storm is a questionable undertaking. We trudged steadily uphill over the next few hours with the summit looming then disappearing behind the curtains of storm clouds. Lightning and thunder cracked in the distance and the stars were veiled overhead. After climbing roughly 3,500ft we stopped to reassess. The weather was poor. With some careful evaluation, we decided to aim for the first summit and to keep an eye on the storm pattern as we moved up. Our team progressed silently over the rocks with an occasional stop to size up the weather trend.

As luck would have it, the bulk of the storm held off just long enough for us to climb another 2,000ft to the summit of Teewinot at 12,800ft. Then, it was time to make a serious decision. To move forward on the traverse would commit us to climbing peaks with no bail-out option for the next few hours, putting us at risk of an electrical storm and slippery conditions for rock hopping in rain, sleet, or snow.

With some heavy pondering and evaluating, we decided to retreat. Retracing our steps back to the Teewinot saddle, we began our descent to 7,200ft.

We made the right choice. By the time we arrived back to the parking lot near Jenny Lake, the storm had moved in and surrounded the entire Teton range. Our team had worked through its first challenge and, all in all, it had been an excellent exercise in mental focus, decision making and time management. It was disappointing to not finish the route, a long time goal and with the right crucial pieces of the right team and the right training. But, if the weather doesn’t cooperate, what can you do?

It has been a rainy summer in Colorado, but since this excursion I have had some luck with a few drier days in the mountains. Upon my return to Telluride last week, I headed out on another long training mission on Telluride’s Seven Summits traverse route, a climb that spans seven separate summits, two ridges, and six peaks above 13,000ft, all over twelve miles. This time, I got lucky with a one percent weather to sun ratio, succumbing to a mere five minute hail storm in a seven hour push that moved in and out so quickly it forced me to seriously question a fast retreat and yet remain safe enough to actually finish my day.

And, after all, what would training be without a little bit of raining?