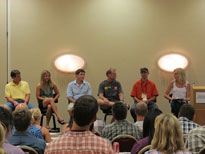 The Outdoor Retailer Show in Salt Lake City, Utah, is where you can find the outdoor world under one roof. I went there last week to find out what companies and people are doing for and with our military veterans and to blog what I found for Elevation Outdoors. I walked the massive convention center taking it all in and talking with anyone who would take the time. Here are some of the highlights of my visit.

I attended the panal on Life and Death on Everest 2012. The panel talked through the dangers on Everest, how many people is too many on summit day, the use of helicopters for emergencies and non-emergencies, should there be a limit set on the number of climbers or qualifying criteria to climb Everest?

The discussion that followed was an interesting glimpse of the climbing dynamic that happens only on the highest mountain in the world. In military speak, an After Action Review of the 2012 Mt. Everest climbing season was what the panel was talking its way through. The dangers involved, the use of high performance aircraft at their operating limitations, the death of climbers, and the experience of the climbers or the lack of experience of some climbers on Everest. What was expectable in terms of risk and numbers of climbers on any given summit day. I found it all very interesting and was struck by the similarities that occur between the climbing world and military veterans. Next on the list was Conservation Alliance breakfast with guest speaker Aron Ralston. I had heard the story of him cutting off his own arm to break free of his entrapment after surviving 5 long days in the very remote canyon lands of Utah. That still did not prepare me to hear him speak of the event live and in person. Aron spoke with humility about the events that should have taken his life. He used humor often and spoke with the conviction of someone who has faced their own death and had plenty of time to contemplate that fate all alone in the desert. He credits his mom and many others for saving his life. Now Aron is putting his efforts towards saving the very canyons that almost took his life. Aron continues to climb and get outside with an adaptive prosthetic. Aron can come climb with VetEx any day he wants.  He is a humble man like so many veterans who have been through similar but different traumatic events.

And then there was all the gear. I was curious to talk with gear companies to see if they market gear towards military veterans, if they consider military veterans a valuable and marketable customer, or if gear companies consider vets when they market particular products. I was also at the show to see if companies would be interested in helping VetEx get the gear needed to get military veterans outside. What I found was that companies do not market products with veterans in mind, and when I asked “what are you doing for our veterans looking to get outside” I got some puzzled looks. Many companies stepped up with support however. Keen, Nalgene, Cascade Designs, Camelback, Julbo, OR, Fits Socks, Marmot, Blue Water Ropes, Black Diamond, and the North Face are all interested in supporting VetEx in getting vets outside. Conrad Anker himself will be heading out with VetEx on our next expedition to Glacier National Park. I see big things in the future with veterans and the outdoor community. In the end we are one in the same.