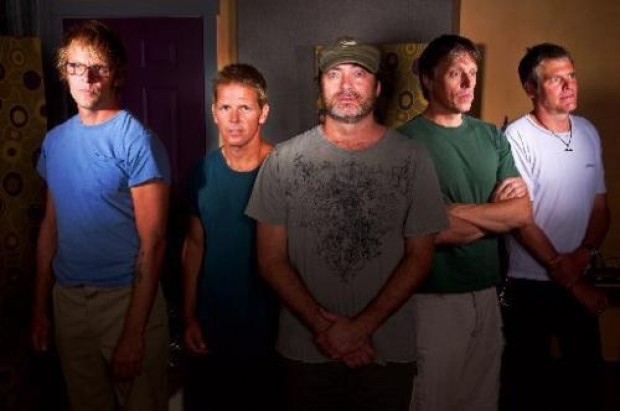 Sean Kelly of The Samples — Spokesman for the Misfits

I’ve been listening to The Samples, a college band founded in Boulder, Colorado, in the late 80s, for 20 years. My sister, Alissa, four years older (and wiser), got me in into them back in the early 90s — then a freshman in high school — living in Marin, California while she attended UC Santa Barbara.

We’re not alone; The Samples have a long list of followers both old and new.  Their Facebook fan page  has over 7,000 fans. Their timeless sound appeals to fringe dwellers like myself and mainstream alike.  An old photo posted on their page shows the singer meeting with then President Bill Clinton. I quoted The Samples in my high school yearbook (“Nothing lasts forever, not the mountains nor the seas, but the times we’ve had together, they will always be with me” – which, in hindsight, is completely untrue), in 1995, before moving to a tent in Yosemite, which would remain my seasonal home for the next decade. I cleaned bedrooms, cooked and did various other jobs to support climbing. Then, I’d often carry a boom box and set it at the base of climbing routes, playing songs like “Nature” as I climbed above. The other tape was Jimmy Buffett’s ‘Off to See the Lizard.’

Founding member of The Samples, Sean Kelly from Manchester Vermont, still plays shows in Colorado, and throughout the US; he’s been touring for 25 years. In this time other members have come and gone. He regularly updates his Facebook fan page, and despite being the only remaining member in the band, has kept the name, The Samples, “to keep from confusing people,” he said.

Recently, Kelly posted a new album will be due out this summer. He uses FB and his website, TheSamples.com, to post images and upcoming tour dates.

A few weeks ago, I reached out to Kelly and asked if he’d be keen for an interview. He agreed.

Several sessions of phone tag later, we finally connected. An hour later, I came to discover that he and I have a lot in common. Climbing/traveling and writing is what I know, it’s what I do, and what I love. Music, writing and touring is Sean’s path, and despite working odd jobs to keep afloat, he’s never lost his direction. He’s sold over 1 million records in his lifetime.

Where do you live now?

I am in Highlands Ranch. I was living in California [before that].

What brought you back?

The end of a relationship.

How long ago did you guys start? The Samples in the early days

’87. We were a college band. We played a lot of colleges. We played Santa Barbara a few times.

A friend of mine who played guitar in [a] band told me it was 70 degrees in February. His brother went to CU. I [had] never been west of the Albany NY; [that’s] a half hour from where I’m from. We drove out in a Volkswagen Golf. And brought two guitars and bag full of dreams. I turned 21 on the drive out. [Once there] we stayed on people’s floors. We made it [there in] 30 something hours. We met the [remaining members of the band] in the first two months: our drummer, keyboard player and bass player. We made things happen in the first five months we were established in Boulder. The odds are not for you.

We were starving and that was a big motivator, if you have things smooth and easy you lose your focus.

Ninety-nine percent of the songs were written by [me]. The original band was only around for four years. [Between] ’87 and ‘98 we had a several people leave the band.

Have you ever taken a break?

[No.] I’ve been consistently making albums.

How many albums have you made?

All under the same labels?

I saw you play in Louisville last year.

We were doing the Louisville Street Fair. I lived there two years ago. It’s a great town and a great event.

Does anyone else in your family play music?

Two of my brothers play music quite a bit.

What roles do you play in the band? I play guitar and sing and write.

Where do you get your inspiration?

Movies, experiences, the news…there is so much to draw from.

There [are] people of all shapes and sizes that are into our music.

Are there any crowd favorites, like 14th and Euclid?

We haven’t played that in awhile. It would be nice to dig it back up again.

Tell me about the new album.

We haven’t recorded it yet. It hopefully will be done this summer and we take it from there.

It’s always different. Rehearsing for Life was done in eight days. That is pretty much unheard of.

How do you prepare to go into the studio?

When you feel [it] it’s time. I took some time off the past few years to do new things. It’s always inspiring to get away. You ask yourself what is there to write about. Some things surface that become songs.

How did the original band meet? The Samples in the 90s

We met in Boulder. Two members were going to CU at the time. Different versions of the band over the years [and] I met in different ways. Sometimes I was seeking musicians, sometimes word of mouth, sometimes we held auditions.

How long have you been playing together with this current band?

Several months. They’re the guys [I’m] going to the studio with. Live albums are much easier. When you’re in the studio making a new album it’s pretty exciting. Usually it’s not that hard in the studio. You go in pretty prepared.

You’ve been playing for 25 years.

I’ll write and play my whole life.  Being on stage is very comfortable. It’s a really good feeling. Very liberating.

I get inspired from so many musicians: Bruce Hornsby, the Beatles, Neil Young, Crosby Stills and Nash, Jackson Browne. I think music these days is over produced and watered [down]. It doesn’t jump out at me [that] much. The stuff that comes out now is like fast food, it’s gone before you know it. That’s not speaking for all of it. It’s just changed so much.

How did the band get the name? We got our name from meeting at King Soopers. That was our survival technique when we first got there [to Boulder]. We would go to two to three King Soopers and Safeways [with someone who] would drive us around. We would go to the food samples. They’d have the platters out. They would have a piece of cheese, whatever it would be. We worked our way up to churches, then Hari Krishna houses. When you’re hungry, you’re hungry.
I left high school early.

No, not at all. I was diagnosed with ADD and Dyslexia. I was told by my 8th grade teacher that I was mentally retarded. It hurt my self-esteem. I just focused on music and blocked it out.
It’s an adventure. Taught myself to play music. I never once took a lesson. I couldn’t read music to save my life.

Music made me feel [like I] belong. My friend gave me this old guitar. Slowly but surely I started getting it down. Many of those songs – like Nature, Feel Us Shaking, I wrote those when I was 16. Seany Boy, I wrote that song in freshman year in high school.

Don’t go with the norm. My chances of being successful in the music industry [were] like winning the lottery.

I worked many jobs: Construction, dishwashing, a roofer, a pizza cook, a regular cook. I worked for a janitorial service called Service Master. I got paid minimum wage, $3.35 an hour.
I’m kind of a spokesperson for misfits. They need someone to look up to. We never got any national press. We never got any real radio play. We never got big media. It doesn’t matter. It’s still good music, and it has a long shelf life. That’s what we set out to do. 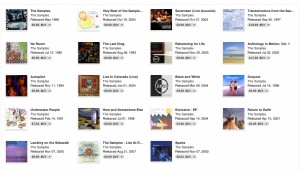 What are your favorite Samples songs?

How do find time to write?

I write when no one is around. There’s definitely time[s] when it is. You find the time to find that quiet time.

You can let people know we’re alive and well. We have a ton of shows in Colorado this summer. We have some Denver shows. Some shows in Fort Collins, Mishawaka in Poudre Canyon. Kansas. It’s all on the website.

Advice for bands that are starting? My philosophy is to operate by the Four Agreements; it’s a great book. Like being impeccable with your word. Don’t take things personally. Never assume; assumptions will ruin your career. Always do your best. If you can operate in those four guidelines you always will get somewhere. You’re guaranteed to go in the right direction at least.

That’s pretty much it. … There is something that is of some interest. The other day [I got word] Oprah Winfrey is making a movie and they want to use one of our songs in [the] movie when it comes out. The song is: Could it be Another Change. That’s on our first album, self-titled.

You can get our music online, on iTunes.