Pedego was founded in 2008 in Newport Beach, California by long time friends and business partners Don DiCostanzo and Terry Sherry. There are over 100 branded locations plus over 300 dealers selling the brand across the United States. They are also sold in 40 countries. Pedego offers over a dozen different styles of electric bikes, including their one cargo bike, the Stretch, which was released in 2015. A new dual-motor version of the Stretch came out in April.

The Pedego Stretch has an extended tail to afford it the Cargo moniker and comes ready to take loads on the rear as well as on a smaller front rack. A cushioned seat for the rear rack is available as an optional accessory to better accommodate passengers. The rear configuration includes a back brace, footrests, and a protective guard from the rear wheel. 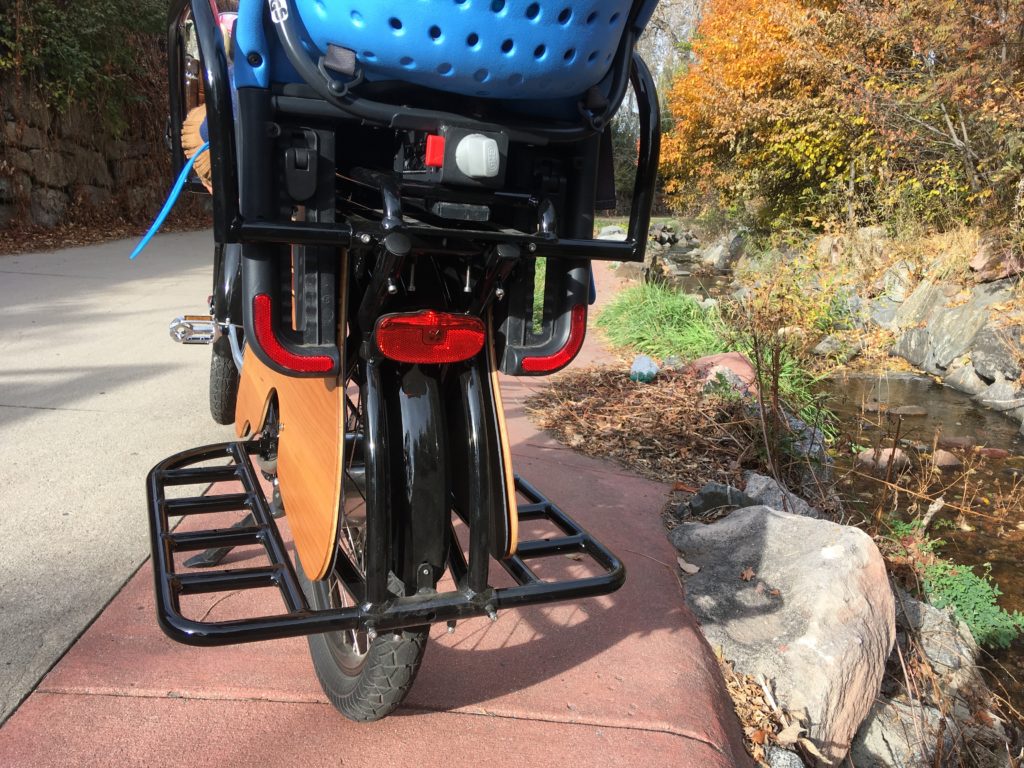 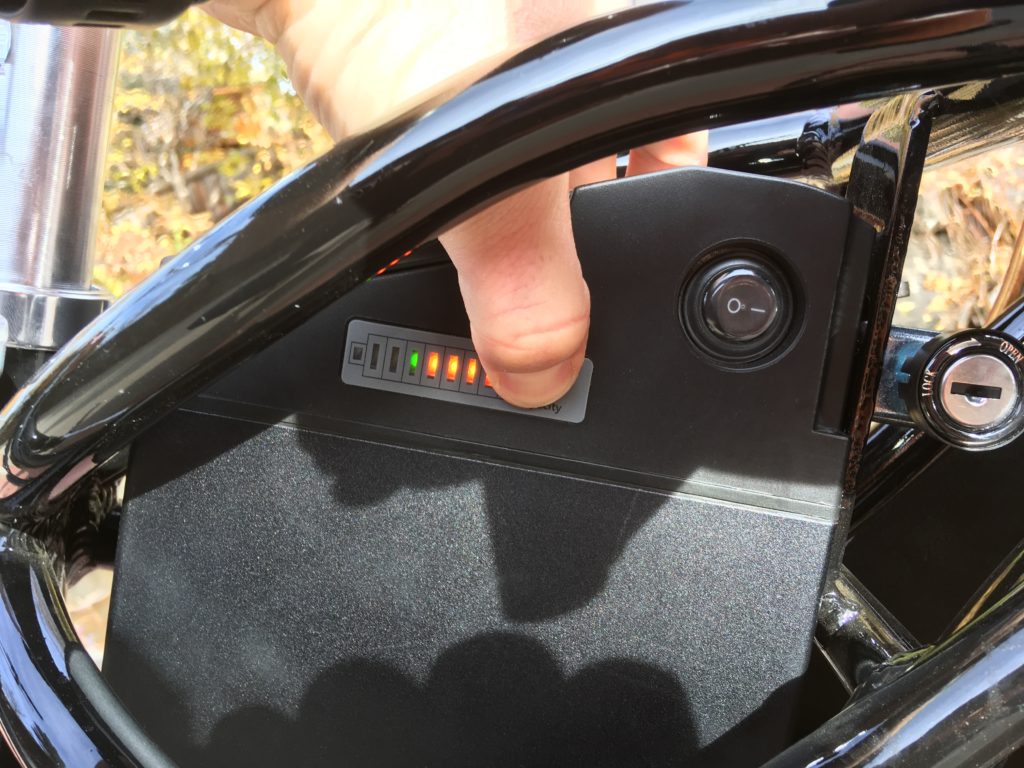 Front and rear lights are built in. However, because the front light is mounted on the left fork, it sits below the wheel and that causes a dark patch on the right side of the bike. 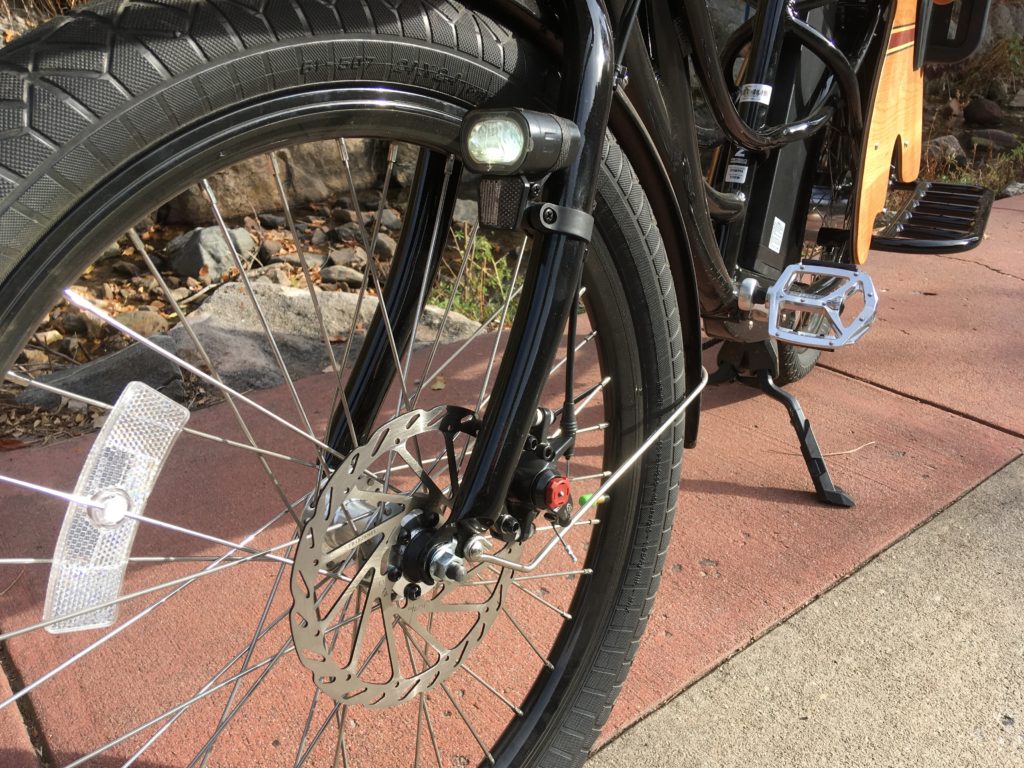 Since the Pedego Stretch comes stock with only a cargo back rack, they offer a $60 passenger package which includes a padded seat for the horizontal rack and a pad to cover the back rack to serve as a more comfortable back rest. If your passengers are littles, you’ll want to also add the $80 passenger rails to give them a good place to hold on and to keep them contained. For cargo only hauling, the running board style footrests and vertical backrest frame components can be moved inline with the long tail to create a larger cargo platform. There are also pannier compatible rails to accommodate hanging bags. 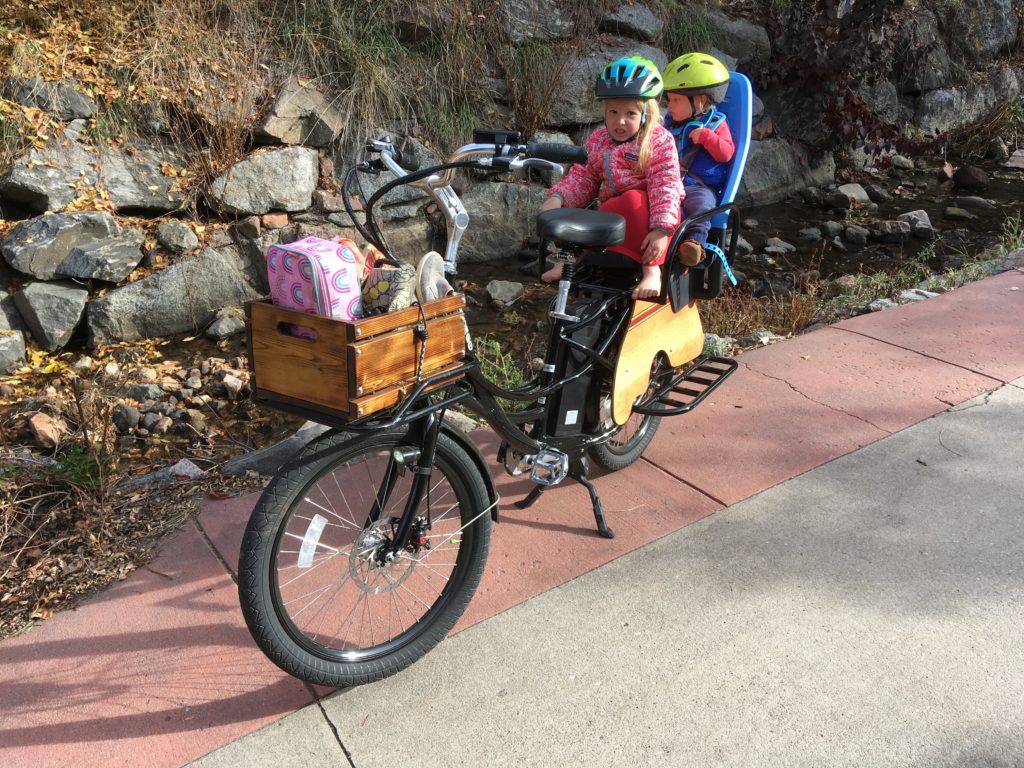 The front rack is about one-foot square and is attached directly to the frame so any weight placed there is not felt in the steering of the bike. But because of this, the rack does not move with the handlebars and can take a little getting used to while riding. Pedego does offer a few baskets as accessories, but they’re a little smaller than the front rack so they don’t take advantage of all the space available. It does however include a few mounting points to build a custom box or basket and the bars make it easy to attach items with rope or elastic cords. The Stretch has a 400-pound payload capacity which is just below average for this style of cargo bike.

The Pedego Stretch is equipped with a 500-watt hub mounted motor with a max speed of 20 mph. This proved in our testing to be plenty of power. It has a nice feel of acceleration without throwing the rider off guard and/or off the back of the bike. The motor can be set to five different levels of pedal power assist, each corresponding to help get the rider to a certain speed. There is also a grip mounted override throttle where the rider can crank out a little more power and speed when needed, regardless of what power assist setting is dialed in. 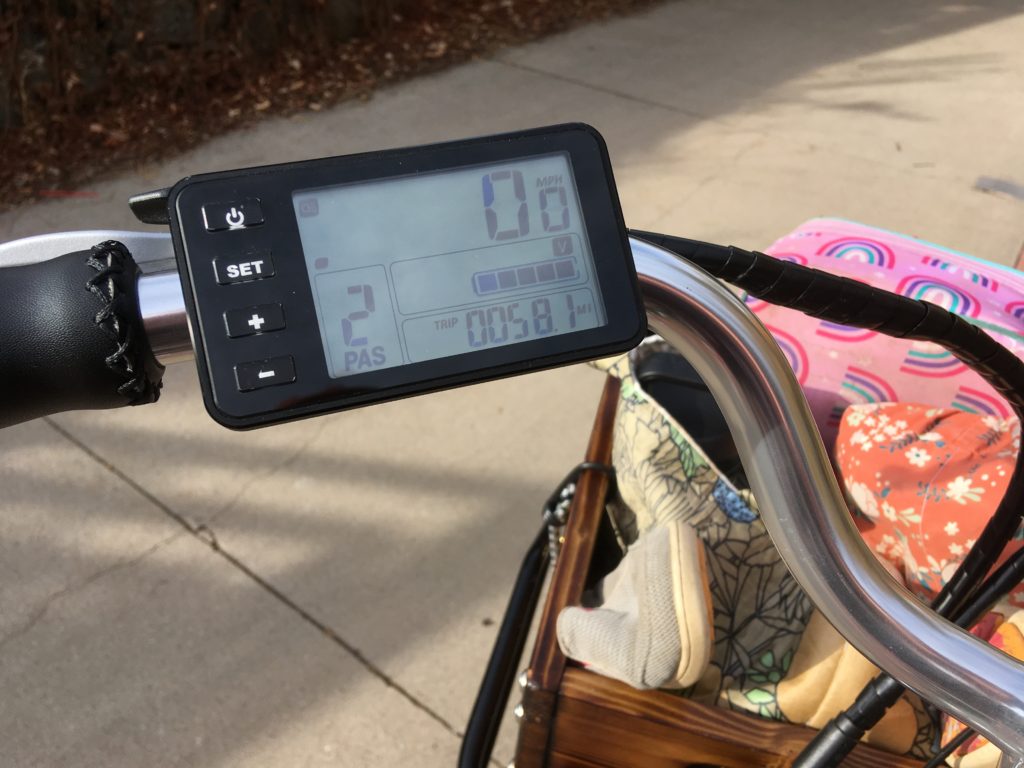 To power the motor, the Stretch uses a 48-volt lithium-ion battery and can be ordered with either 13Ah or 17Ah capacity. Obviously range and frequency of needing to charge the battery will vary on which battery is used, how much load is carried on the bike and what kind of terrain the bike is ridden on.

In our testing, we made regular trips to downtown Boulder, about five miles each way over a few rolling hills (and right past the local Pedego dealer shop). We could do this trip, plus a few other shorter side trips, 3-4 times using a modest power setting hauling ourselves and our 1-year-old before the battery level indicator dipped down to where we thought we might get stuck having to pedal back home without any power assist. That gave us a useful range of about 40 miles. 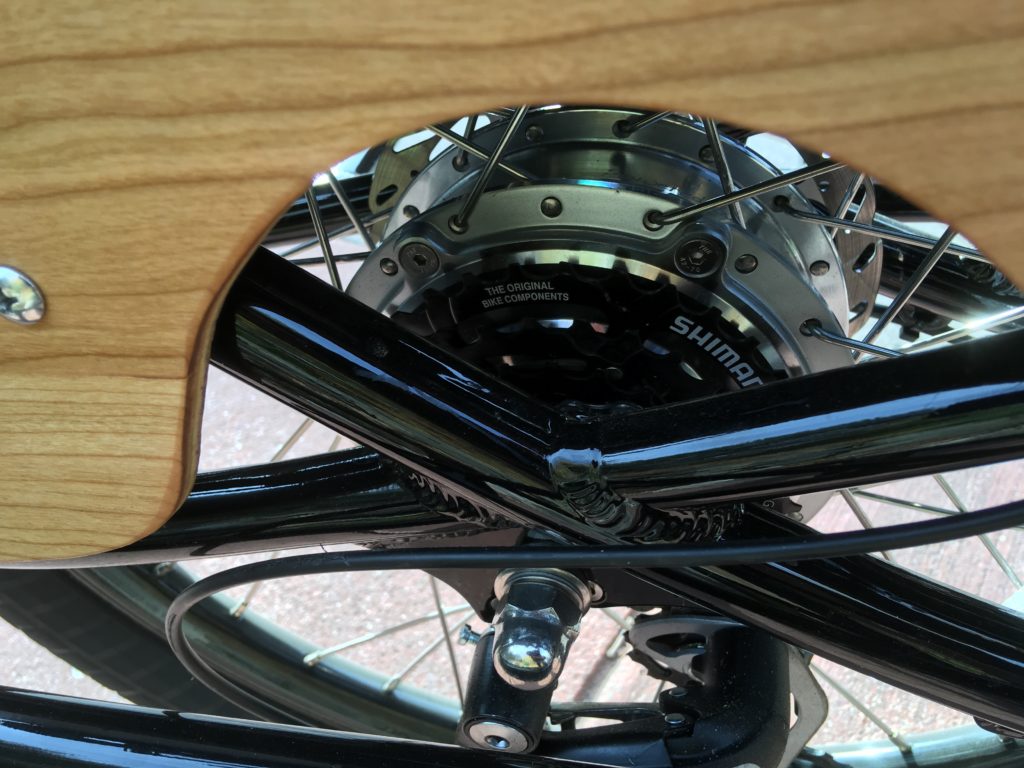 In practical terms, we were charging the battery about twice a week. The battery, which locks in place with a key, can be charged on the bike or be removed and takes about six hours for a full charge. One little quirk with the battery is it has its own on/off switch—separate from the power button on the handlebar mounted controller. The battery will turn itself off after about 40 minutes of inactivity and will need to be reset by throwing the switch off and on again to wake it up before being able to ride. The battery also includes its own power meter so it doesn’t need to be connected to the bike to see the charge level.

With a nod to front loader bikes, the way the front rack is attached to the frame, it holds stable and doesn’t steer with the handlebars. That doesn’t really affect the actual handling, but it does draw your attention. An advantage of having the rack mounted to the frame is any load added to the rack does not put weight on the steering column, keeping steering light and easy.

The Pedego Stretch is easy to steer and get around tight corners while riding and, as with all cargo bikes, the trick comes when trying to handle the bike when you’re not riding it and trying to get into position to park it into a certain spot. With the hub-mounted motor and most of the cargo load in the rear the back of the bike is difficult to lift and nudge into place. One thing to watch for is when lifting the front wheel to pivot on the rear, be sure not to let the load get too far behind the axle as it will then lift the front end of the bike right into the air (and if your cargo includes kids, they will not be happy about it). 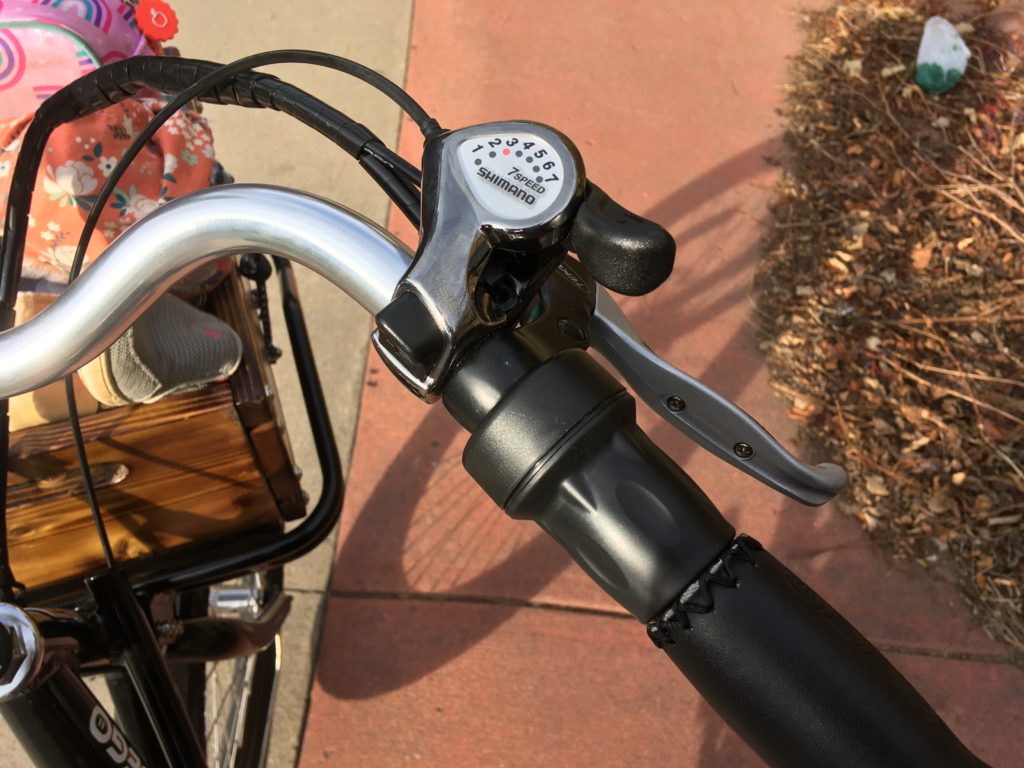 Once in place,  the large double kickstand does have a learning curve for smooth deployment, which requires lifting the front wheel by gripping the stem. Getting the bike off of the kickstand just requires pushing the bike forward, though, I often had to place my foot against the kickstand to help it fold up and stow. Otherwise the kickstand is prone to just slide along and not fold up. This is relatively easy when the bike is empty, but with a load of two kids, it took a bit of effort to get the kickstand clear. To be fair, this is fairly typical of this style of kickstand found on a number of brands of bikes. 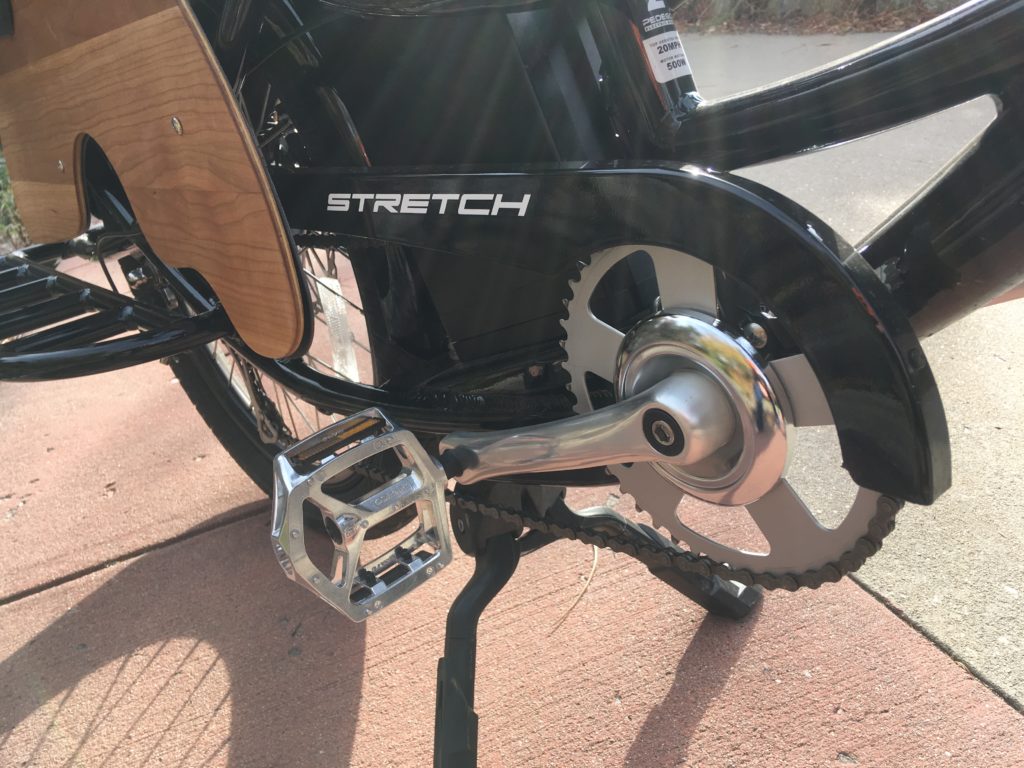 The AVID G2 clean sweep disc brakes are nice and large at 180mm in diameter—perfectly appropriate for the loads this bike is capable of carrying and they proved to work very well. The shifter is also easy to use, but it’s easy to forget to use it thanks to the motor assist. 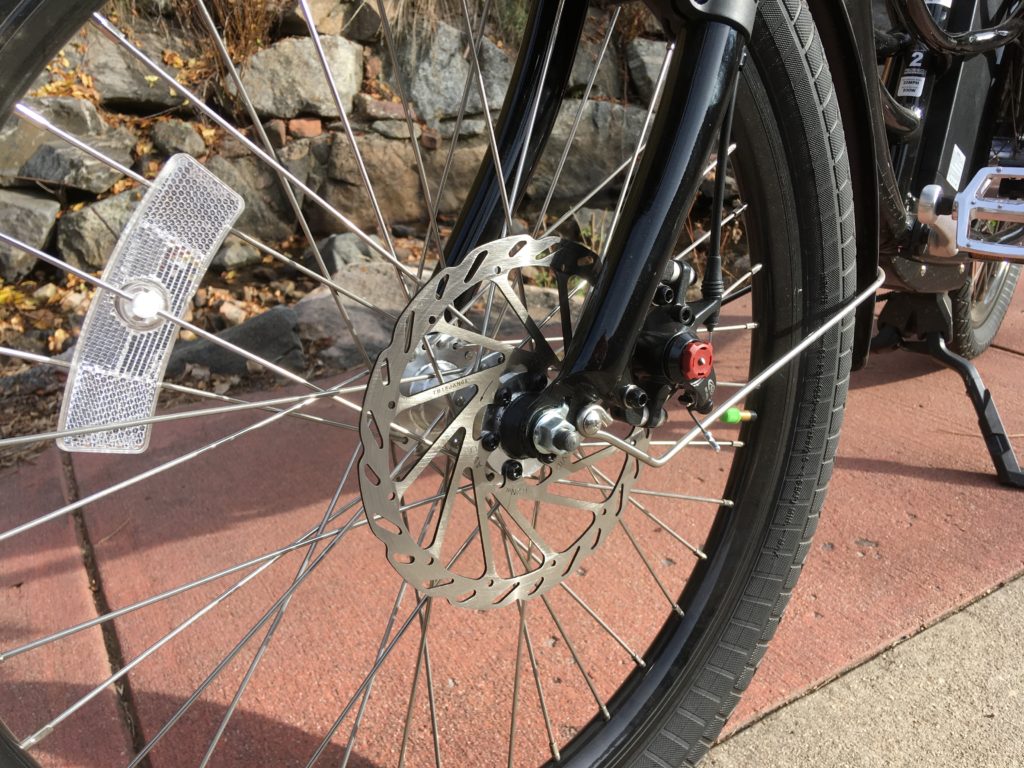 The ride quality is great. The Pedego Stretch, with it’s step-through cruiser style design is easy to mount and get going. The 24×2.4-inch wheels are a little smaller in diameter than the common 26-inch found on most adult non-cargo bikes, but they help keep the center of gravity lower and makes it a little more nimble in steering. The 2.4-inch wide tires help make up for the smaller diameter by putting more rubber on the road and works to absorb some of the smaller bumps found in the way of uneven cracks in the pavement or the like while riding. There is no suspension at the wheels, but the coil sprung suspension seatpost and soft foam cruiser style saddle work nicely with the wide tires to keep the ride comfortable on relatively smooth surfaces.

The Pedego Stretch costs between $3,995 and $4,295 depending on which battery is chosen. That’s middle-of-the-road for bikes of this type. As mentioned above to make the bike passenger specific you’ll need to add another $60-$140, which is really just a drop in the bucket compared to the overall cost. If your passenger is a teeny-tiny, expect to add another $200 for a kid’s seat. Certainly one of the advantages of the Pedego brand is they have over 100 stores worldwide (mostly in the US) to provide face-to-face Pedego specific service.