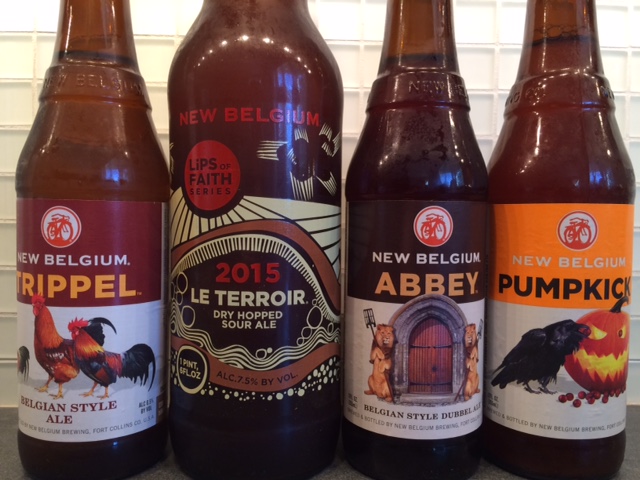 New Belgium Brewing has always paid homage to the classical beers of Europe. Makes sense since their founder Jeff Lebesch first came up with the idea for the brewery during an extended bike trip through Belgium. In fact their ubiquitous Fat Tire Ale is named after that instrumental trip, and is their take on the Belgium beers Lebesch fell in love with. Even though he is no longer part of the company, obviously he was on to something since his brewery is now the 4th largest craft, and 8th largest overall brewer in the United States. But with success comes scrutiny. Many have accused them of becoming too big and too wide spread—not craft beer any more.

Yes they are successful, and yes their breweries in Ft. Collins, Colorado, and Asheville, North Carolina are masterpieces of brewing technologies, but head brewer Peter Bouckaert and his team are continually trying new and exciting ideas, while keeping an eye on their classics.

So when they announced several months ago they were tweaking the recipes for their Trippel and Abby Ale I was intrigued. The original creations were good, actually some of the better offerings in their mainline collection, what would the changes offer?

In the case of their Trippel, they added Pilsner malt to the ever-present Munich malt, to help create a richer flavor that works well with the new yeast strain designed to eliminate any off flavors. By adding in Hallertau Mittelfrüh hops there is a slightly spicy kick to this 8.5% beer. Its full flavored golden taste is perfect for the approaching fall weather, when something a bit more substantial is needed to help ward off the chill.

Abbey Ale has long been a hidden gem in the New Belgium catalogue. Full flavored with strong chocolate, and caramel flavors, it was a reasonably priced take on an old Belgium favorite. By adding two more malts (Caramunich and Special W) to an already impressive malt bill they seem to actually add more flavors to this brew. Tasting the new version next to the old one the richness is evident. Nice job Peter and team.

Everyone seems to be turning out some form of Pumpkin beer this fall. It leaves me begging for some new flavor to catch the brewers’ eye. Enough already. New Belgium’s offering is Pumpkick a spiced pumpkin ale seasoned with cranberry juice to add a hint of sour. It is an interesting and refreshing take on a crowded category; just one I am growing tired of.

Lastly the latest addition to the Lips of Faith series the 2015 Le Terroir is fantastic. Since they launched their barrel-aging program over a decade ago Bouckaert and team have been turning our some excellent beers. This dry hopped sour ale is loaded with layers of flavor, the Amarillo hops added during the final hopping helping to bring out the fruity elements of this beer. The sour flavors are just sharp enough to get you excited when the peach, apple, and nectarine flavors slowly slide forward. Great beer, get one soon.

Overall the team at New Belgium deserves high grades for their latest efforts and you should stock up on them. Fall is the time of bigger flavors, and all of these deliver.

Liquid Gear is proudly sponsored by Hazel’s Beverage World which is the go-to store for outdoor enthusiasts and everyone else on the go.  Featuring Boulder’s largest selection of wine, beer and spirits at everyday low prices, Hazel’s has lots of beverages that are easy to carry along and enjoy no matter what your adventure.  So don’t forget to pack the party—fly by Hazel’s before your next excursion and stock up on your favorite liquid refreshments. Hazel’s – Same Planet, Different World.