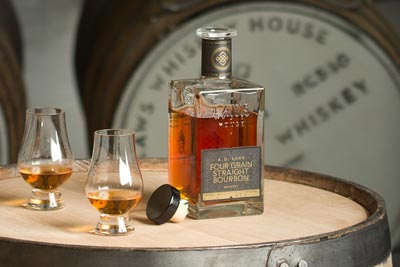 Everyone is crazy for whiskey these days. Not just in the Rocky Mountains where nothing is better than sipping some hooch by the fire, but across the globe. In fact global whiskey consumption is at an all time high with over $2.4 billion sold last year. Demand is so high that bourbon distillers in Kentucky are struggling to find enough fresh barrels to age it in. So it’s safe to say that the numerous micro-distillers are firing up stills across Colorado are hoping to take advantage of these heady times. But there is just one problem—good whiskey is tough to perfect, and takes years of lead time until you actually have product to sell. It takes a hearty soul to tackle the numerous obstacles that must be overcome to be a successful whiskey distiller.

Luckily for Coloradans’, and soon our neighboring states, one such individual decided years ago to try his hand at distilling the spirit known as “America’s Spirit”; and he has produced over 1,000 barrels of the finest bourbon I have tasted in a long time.

Al Laws began his life as an oilman a thousand-miles north of Colorado in Canada. But, deep in his heart he knew he wanted to make whiskey. “I have loved good whiskey for as long as I can remember, it was a driving passion for me,” says Laws. “I planned trips around visiting distilleries and devoured any info I could get on making it.”

After decades in the oil business relocation to Denver made him realize he could move beyond dreaming, and actually create a distillery. “Stranahan’s really opened my eyes, they were phenomenally successful and had started small. Why couldn’t I?” says Laws.

While keeping his day job and working during his free time he perfected a recipe. Then he sought out investors and opened a distillery by the old Gates Rubber Factory in Denver. For the next four-years he and master distiller Jake Norris started filling barrels with their creation. “I was still working full time at my oil job, it was the only way to survive,” says Laws. As his passion consumed much of his free time he knew one day it would pay off. And, it did. He was finally able to leave his job and focus on nothing but sweet sour mash last October when his first batch of four grain bourbon was ready to bottle. He sold all 4,400 bottles from that batch in eight-weeks. Customers were begging for more.

With wheat, barley, and rye grown in Alamosa and corn from Wisconsin he has created a spicy take on traditional bourbon. It is slightly reminiscent of Canadian Whiskeys. The first sip has a bit of a burn, but goes down quite smoothly. A hint of tobacco and pepper surface, but then the wheat surfaces for a smooth mellow finish. It would be the perfect sipper on a cool evening by a lake or in your back yard as the sun sets in the west.

So the next time you are looking for something special to sip look for a bottle of Laws Four Grain Straight Bourbon Whiskey. If you happen to be near his distillery Laws Whiskey House at 1420 S Acoma St in Denver stop in and ask for Al, chances are he will come out to share a sip with you.

Liquid Gear is proudly sponsored by Hazel’s Beverage World which is the go-to store for outdoor enthusiasts and everyone else on the go.  Featuring Boulder’s largest selection of wine, beer and spirits at everyday low prices, Hazel’s has lots of beverages that are easy to carry along and enjoy no matter what your adventure.  So don’t forget to pack the party—fly by Hazel’s before your next excursion and stock up on your favorite liquid refreshments. Hazel’s – Same Planet, Different World.