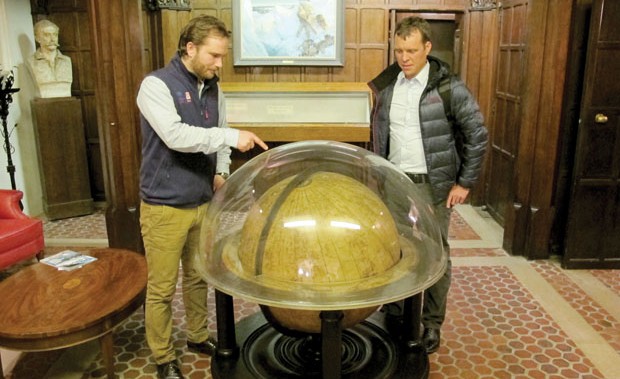 When The Explorers Club throws its annual fundraiser dinner in New York City, guests, who include celebs like James Cameron and John Glenn, feast on treats like tarantula, fried cockroach and alligator. But that’s nothing compared to what some of the members of the famed Club have snacked on en route to membership. Take Peter Freuchen, a hearty Danish explorer who once found himself buried in an avalanche under his sled in Greenland. The man dug himself out with a frozen piece of his own feces. He then amputated his own leg and—you guessed it—ate it to stay alive. A massive portrait of Freuchen overlooks the main room of the club’s digs in a mansion in the Upper East Side, where world explorers with a sense of history can sit at the same table used by Teddy Roosevelt (also a member of the club) to meet with his cabinet. (I should perhaps also point out that one of the other art-piece decorations in this room, besides the stained glass from a French cathedral, is a dork, a.k.a. a mummified whale penis.)

Freuchen, though a great explorer worth reading more about in his own right, is just another dude in this place. It turns out that everyone of any note in the world of exploration is a member of the club. A plaque at the entrance notes that members have been the first humans to reach the North Pole (Robert Peary, 1909), the South Pole (Roald Amundsen, 1911), the summit of Mount Everest (Sir Edmund HIllary and Tenzing Norgay, 1953), the deepest point in the ocean (Jacques Piccard and Don Walsh, 1960) and the surface of the moon (Neil Armstrong and Buzz Aldrin, 1969). I am informed that a space has been left on the plaque for the first person to stand on Mars (you bet it will be a member). Other members have done such things as kill an attacking cheetah by ramming a fist down the beast’s throat as it clawed his head as well as run-of-the-mill stuff like charting the far corners of the globe. Hey, Eugene Buchanan, a friend of mine and frequent contributor to this magazine, is a member due to his trips on rivers in Siberia.

So what’s left? Who can become like Eugene and join this group, beyond the Mars pioneers, that is. I was lucky enough to get a tour of the Explorers Club thanks to Bergans of Norway. I went alongside Bergans’ athlete John Huston, one of its members who, while he has never had to resort to stool-sample tool-making, has found some new ways to celebrate, learn about and experience the places on this planet where humans rarely dare to tread. In 2005, Huston made a 1,400-mile ski and dogsled trip around Greenland using clothing and equipment from 1911—certainly following in the footsteps of both Amundsen and Freuchen, who made some of the first forays on that icecap in the early 20th century. In 2009, he and partner Tyler Fish became the only Americans to make the trip to the North Pole from land, unsupported. One of the most fascinating aspects of these trips is John’s  focus on food, not human appendages, but a very carefully calculated list of how many calories he will need to survive in these harsh environments.

Right now, Huston along with teammates Tobias Thorleifsson, Hugh Dale-Harris and Kyle O’Donoghue is traversing 630-miles on the Arctic Ellesmere Island, celebrating the 1898–1902 mapping expedition of Otto Sverdrup. The team will also look at climate change. That brings up an issue more frightening than poop shovels—we now need to maintain this world we have mapped and explored.